I’ve been reading your “10 Days” saga (5 down 5 to go) and wish I had better heeded the being organized part. I missed out on 4 Albertson’s Doublers I had which expired yesterday and forgot to take 8 – $2/1 Post Trail Mix Cereal coupons which would have given me an overage after Catalinas on 2 purchases. These are still good so another Albertson’s stop before this week’s special expires.

Today went to Walgreens and Albertson’s. 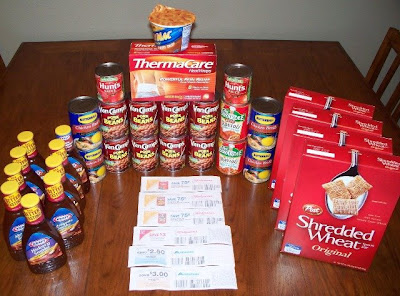 I thought the Catalina machine was broken as 4 cereals should have returned $3.00, not $2.50, so went to CS. After some discussion, she noticed only 3 of the cereals rang up, not 4. Jokingly I said if I hadn’t said anything, I would have been ahead. She said we could call it even as it would be more difficult to re-ring the cereal and correct the error. So, I got a “free” box of cereal and a Catalina worth $2.50 which would have been $.50 more if I had paid for the 4th box.

I will say that I don’t mind the Albertson’s trips as much as I do the Walgreens. When I am at Walgreens wandering the aisles looking for Right Guard Deodorant, or Edge Shaving Cream, or Colgate Tooth Paste, or any flavor of body wash, I get an eerie feeling. I didn’t know at first what caused it, but I do now.

It occurred to me the other night while watching the TV show, “Magic’s Biggest Secrets Revealed.” Once you know how the illusion is created, much of the “magic” of illusion disappears. At that moment I knew when I was at Walgreens I was in a magic store where women (you) go to collect their (your) “Tools of the Trade.” I felt a little conflicted…. Should I learn to master these tricks and illusions to thrill and amaze my friends and family or should I forget all I have seen to keep and believe in the magic you women spend so much time and money to create?

Perhaps part of my ignorance in the ways of love and romance is made manifest here. I used to think (would like to think) that women want to be recognized for their inner worth, their intelligence, their character and personality.

I know now this is not true.

I know this, because when women get ready for a date or special event where they want to attract or arouse those ever-present males who clumsily lumber about, they (you) go to the Magic Store (or many Magic Stores) to stock up on paints, and soaps, and lotions, and creams, and smells, and clothes, and shoes (how many different shoes do you really need?) to create a special illusion to attract and trap their (your) unsuspecting prey. The important thing is not to duplicate the same illusion you used last week. After all, the male might notice and not be fooled by the same illusion he has seen twice.

What women (you) DO NOT do is go the library to brush up on their (your) knowledge or work on some flawed aspect of their (your) character in the Self-Help section to better relate to the brutish man. They (you) do not try to understand the theories of Hawking or Feynman or Heisenberg. They (you) do not visit Barnes & Noble to check current magazines to be fluent in the nuances of photo voltaic arrays for our latitude, the relative benefits of evacuated tube domestic hot water panels, or to catch up on the recent political changes in the European Union as they affect the sale and trading of carbon credits.

This would explain why I have not seen any women (you) in any of these places as I prepared for my social outings. Time to rethink the strategy and decide if I still have enough years to unlearn what I know and relearn how to interact with you females.

I am reminded of the old Groucho Marx saying: “When you are old enough to read a woman like a book, you’re too old to start a library.”

Time to watch an old movie. Here’s looking at you, Krazies.

Rick is spreading the good word and helping his family start to “dip their toes in the waters of kraziness”. Here’s an email we received from Rick’s brother: 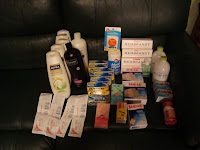 Here is a photo of my latest trek to Walgreens…I call it a “trek” because I feel that somehow makes saving this much money somewhat difficult. If I convinced myself it is easy to do this stuff, I would most likely quit my job, move to a “van down by the river” or an “apartment down by the Walgreens” and support my family of 5 (myself included) by selling “coupon swag” on the street for 50% off MSRP. Obviously just kidding about quitting my job – still, the whole concept behind this process is simply unbelievable. The photo shows products totaling $114.57 (tax included) + RR worth $13.00. The background is my leather loveseat. I have yet to designate a “studio area” in my home for proper product display…maybe I will do that this weekend. I started the day with $12.00 in RR, spent $20.20 in cash and arrived home with $13.00 in RR. OOP = $19.20. Pretty amazing!! Pete
Hot amazon Deals
Echo Dot 4th Generation Smart Speaker, Only $9.99 on Amazon
Baxia Solar Powered Security Lights 4-Pack, as Low as $11.99 on Amazon
Large Beach Blanket, Only $8.99 on Amazon
Garnier Fructis Anti-Frizz Serum, as Low as $1.88 on Amazon

Vans Clearance Shoes, as Low as $14 at Kohl's

Birkenstock Flip-Flop Sandals, Only $9.49 at Zulily

LCD Writing Tablets, Only $10 Each on Amazon