Make Someone's Holidays Great With US...

If you’re looking for a way to give back this holiday season, we have just the idea for you. USPS has kicked off its annual Operation Santa and we’ve got all the details on how the program works, as well as how you can get involved and spread some holiday cheer.

Operation Santa was created in 1912 to help children get their letters and wish lists to Santa and to give adults a way to help by crossing off some of the wishes on the lists. Children can send their letters to Santa, but only if letters are postmarked by Dec. 12. And beginning Nov. 28, early letters became available for adoption and wish fulfillment! Let’s break it down:

Text DEALS to 57299 to be the first to know about the hottest deals happening. 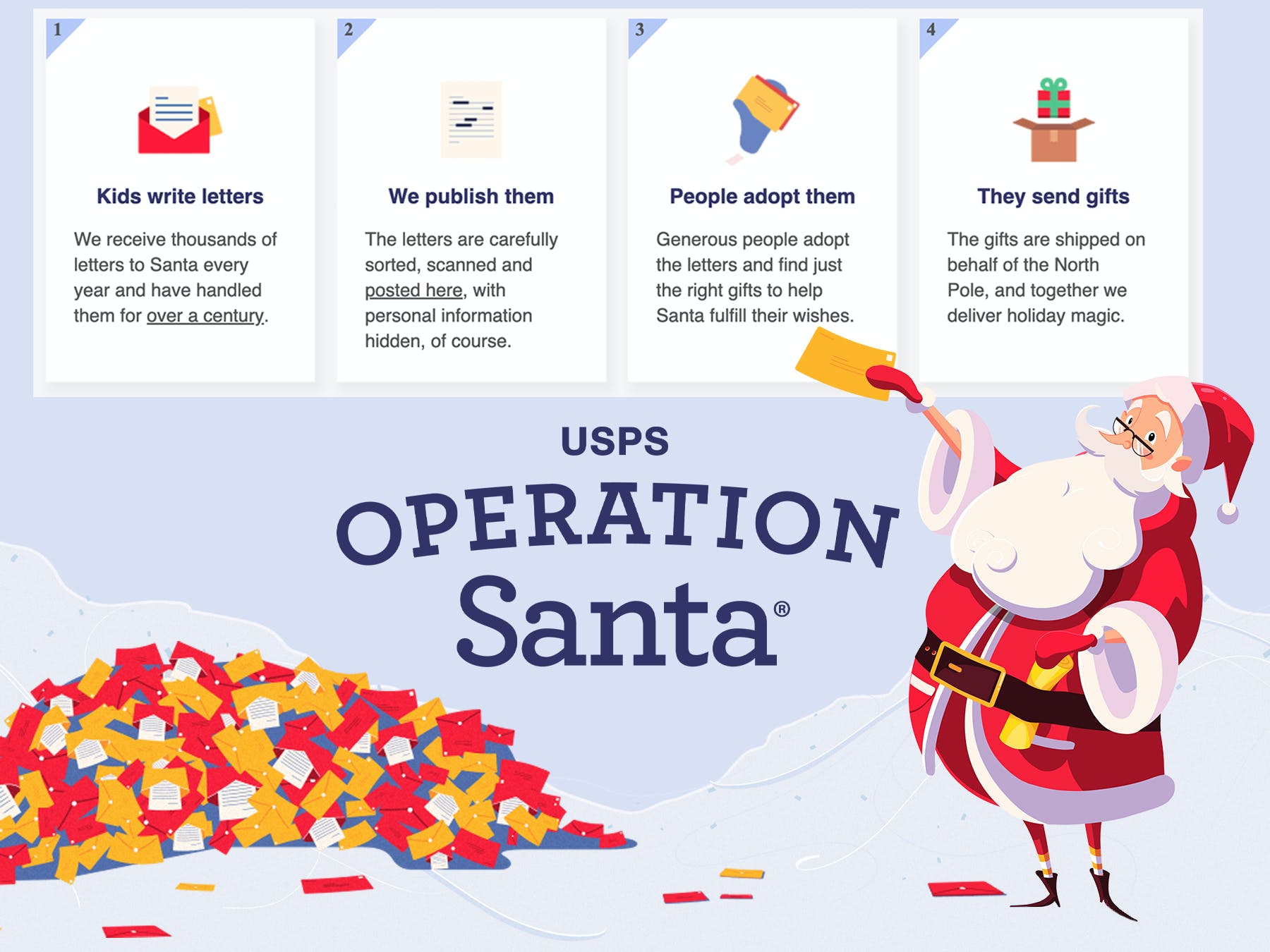 Children everywhere send letters to Santa Claus as part of a tradition stretching back for generations. But what we now understand as a time-honored tradition actually had a bit of a “bah, humbug!” beginning.

Before the turn of the 20th century, letters to Santa were first placed in the chimney, where smoke sent the letter to Santa’s workshop. Children started putting more faith in the United States Postal Service (USPS) in the late 1890s and early 1900s. Unfortunately, rules at the time dictated that all letters sent to Santa were undeliverable, and most ended up returned to sender or otherwise disposed of.

No longer! Under what the USPS now terms “Operation Santa,” anyone from San Francisco to Bangor or Ft. Lauderdale and all of the villages, towns, and cities between can be sure the post office delivers their messages straight to Santa. Not only that, adults can help make someone’s holiday by adopting and fulfilling one of those wish lists.

How to Adopt a Letter and Donate During Operation Santa 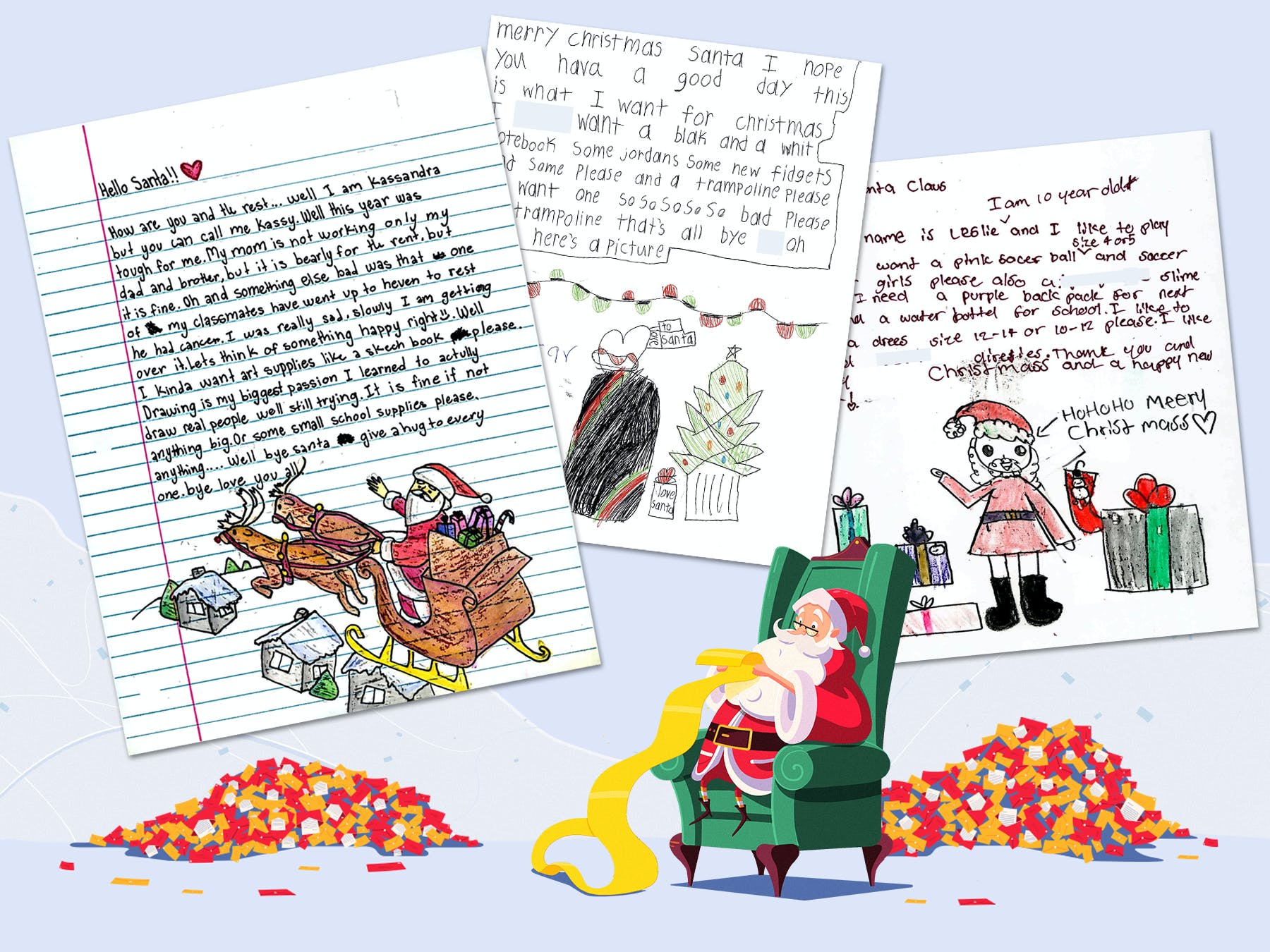 Sometimes, Santa and his team of hardworking elves need a little help from kind and generous people who believe in the spirit of Christmas.

If that’s you, visit the USPS Operation Santa site and click “letter adoption.” You’ll need to register and verify your ID. If you have any hitches with the online verification service, visit any USPS location for help.

Letter adoption began in Nov. 28. If you’re registered, you’ll get a list of potential donation matches and their list of desired items. You can be a deputy Christmas elf by adopting up to 15 letters per registered donor.

Lastly, if you feel too much pressure (financially or in terms of time and logistics) to handle elfing by yourself, you can sign up as a team with friends, family, coworkers, and other kindhearted do-gooders to make a family’s Christmas wish come true. You can also read some of the letters on the site before committing to any child’s request, so you don’t have to worry about committing to more than you can handle.

How to Mail a Letter to Santa From the United States 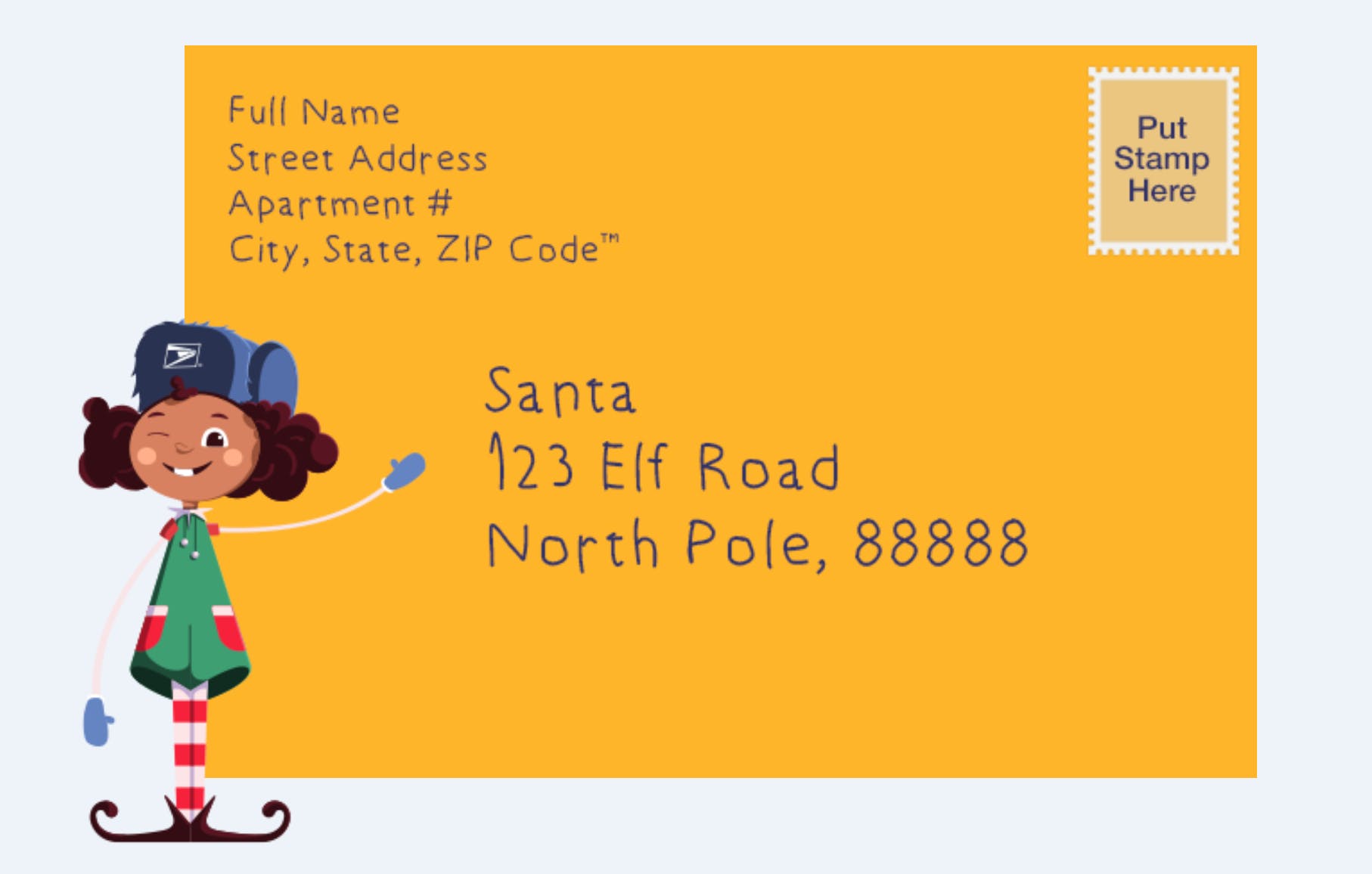 If you’d like to reach out to Santa Claus, you can send a letter to the following address.

The USPS provides a number of free templates you can print off if you’re looking for a little bit of Yuletide inspiration to get the creative juices flowing. Be sure to add a stamp and print your return address (and of course, the destination address) clearly in the correct places.

To give your child’s letter more time for adoption, we recommend sending it in well in advance of the end of November to give Santa and his helpers at the postal service plenty of time to answer it. But don’t fret, letters postmarked by Dec. 12 are still eligible for Operation Santa.

If you can’t get a letter in this year by the cutoff date, bookmark this information for next year! The dates have not changed in the past few years, so we expect the same schedule in 2023. 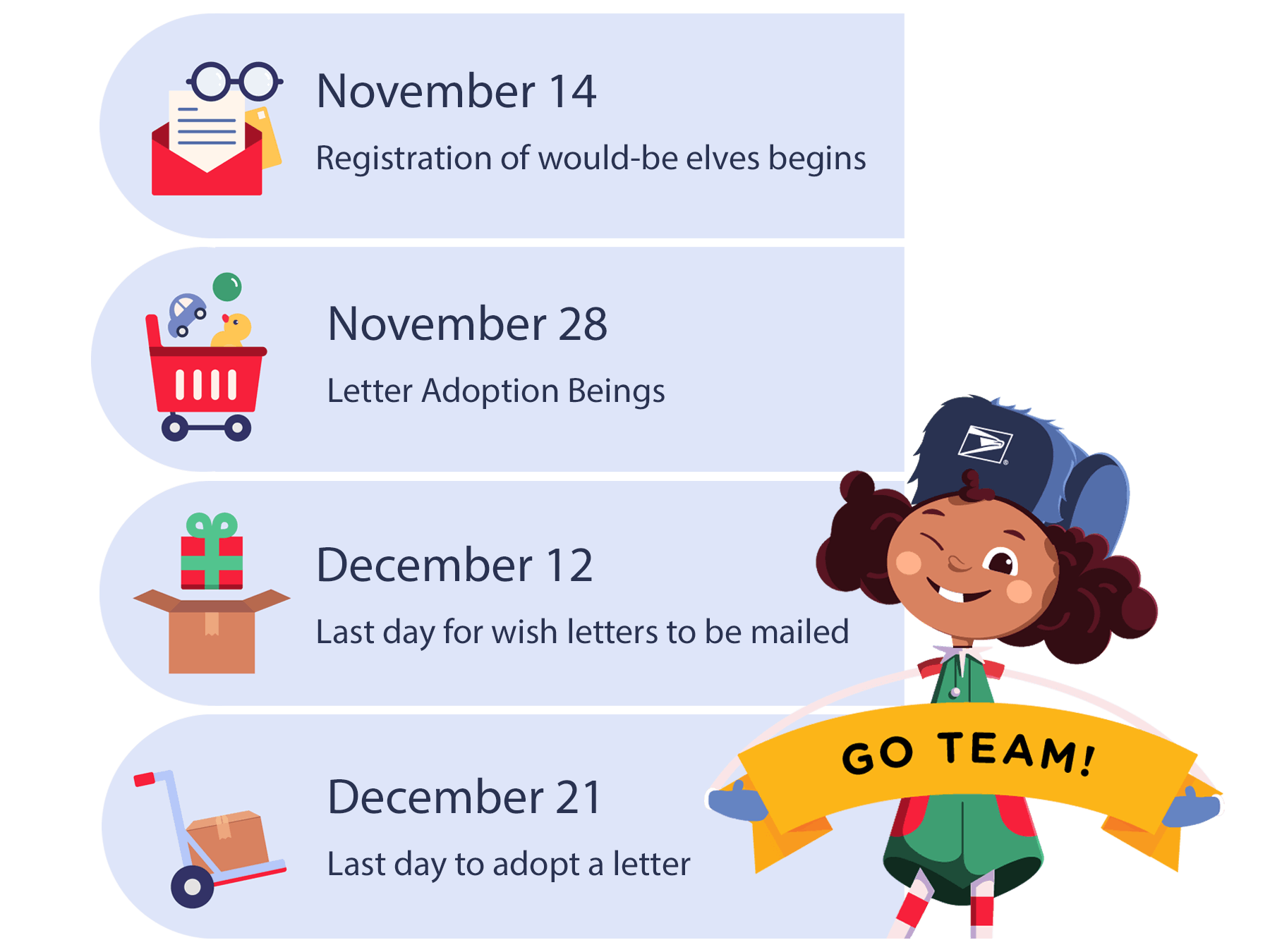 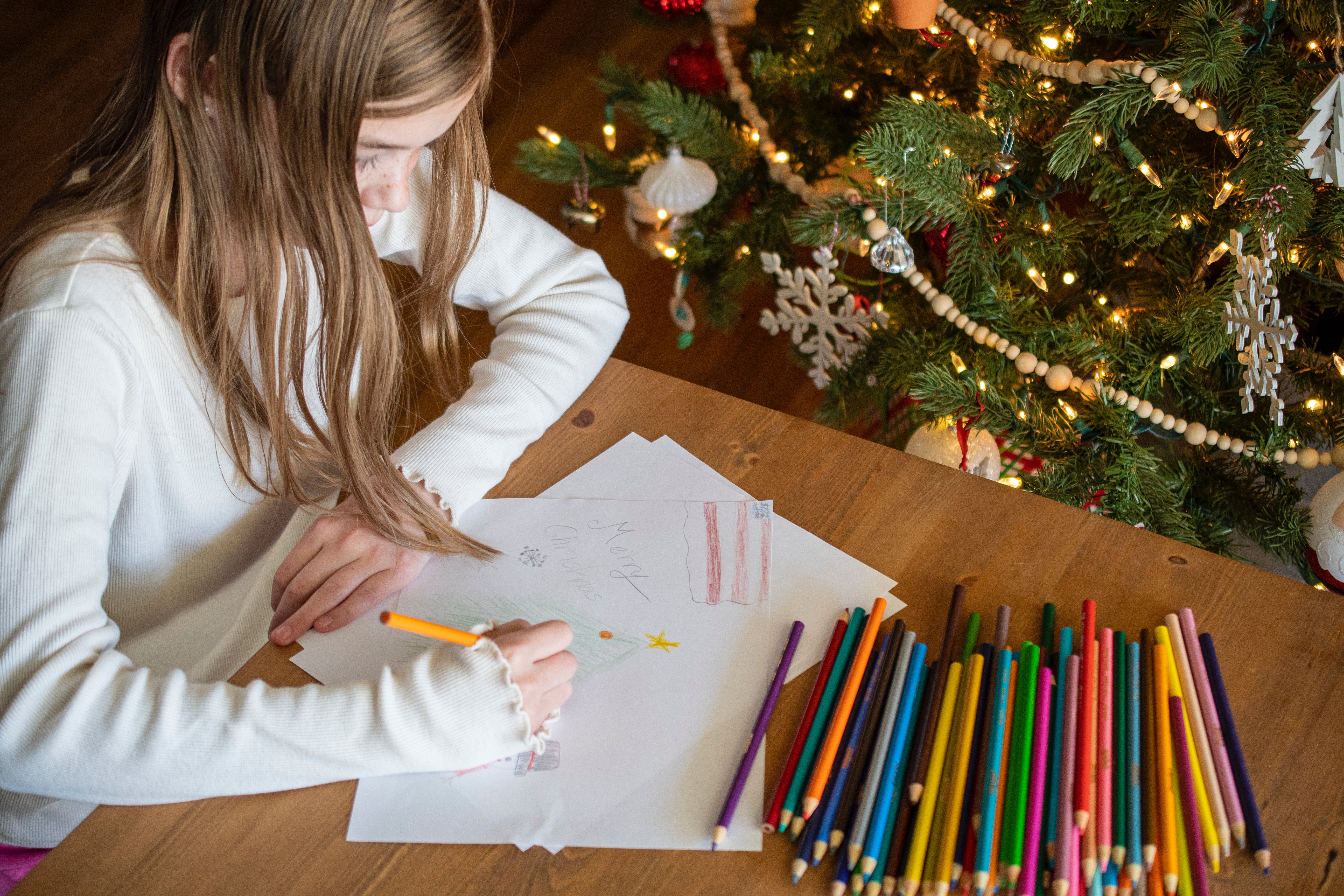 up next
Best Amazon Holiday Gift Sets to Look for in 2022, From $10 to $100
Related articles
These Are the USPS Moving Coupons You'll Get in 2022
Is Dunkin Open on Christmas Day? Here's Their Holiday Schedule ... 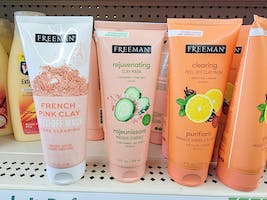