The Dirty Dozen list consists of the fresh produce that tends to have the highest amount of pesticides. If organic products are important to you, but you don’t have the budget to buy everything organic, then at least stick to this list.

And true to what we do here at KCL, I’ve found the cheapest places to shop for these specific organics. Here’s everything you need to know to save money while taking a big step toward eating cleaner.

Download the KCL app for information on produce coupons and deals. 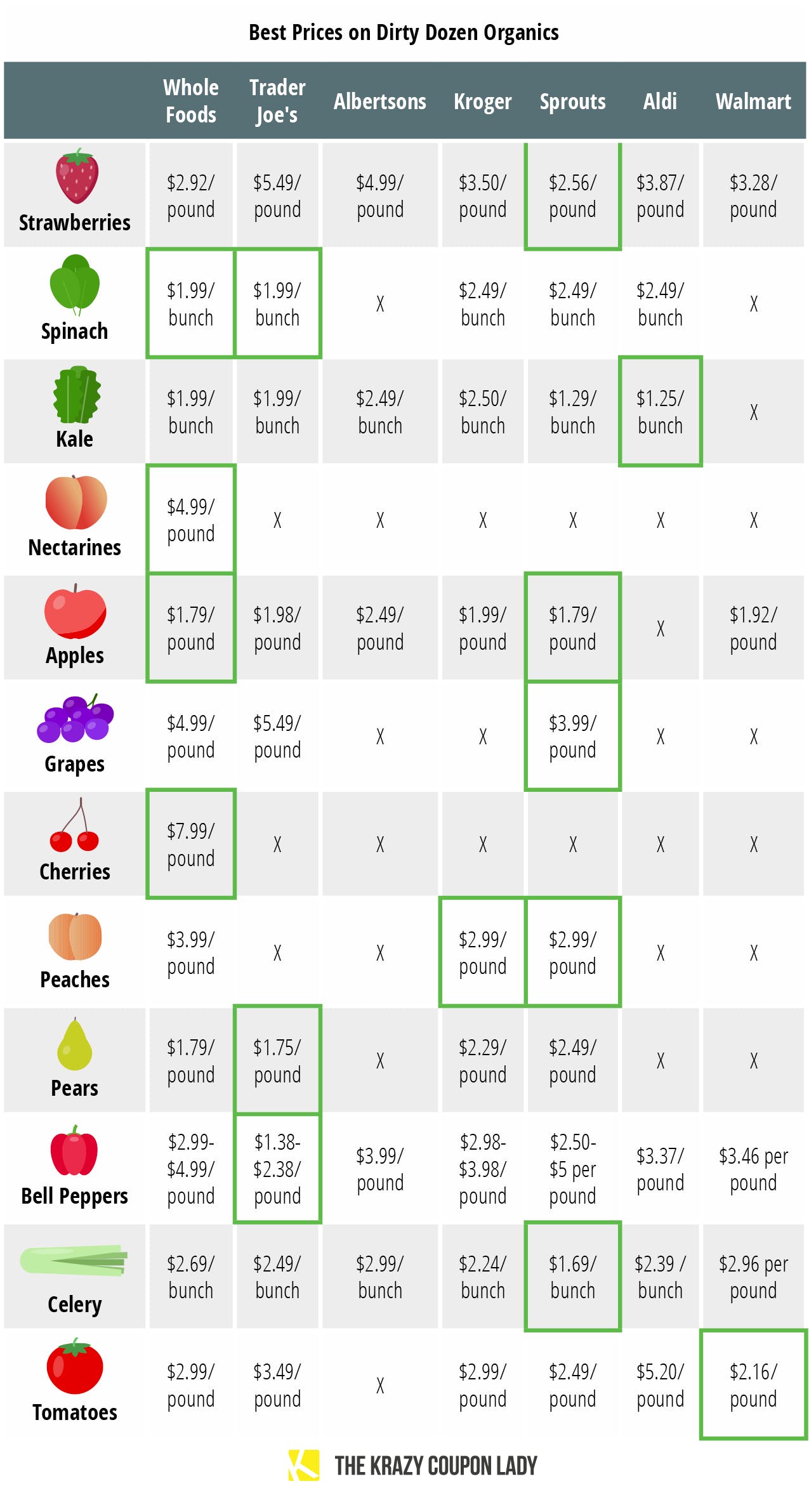 If you don’t want to mess with multiple shopping trips, just hit up Whole Foods. Peaches are the most expensive list item at Whole Foods, but everything else is middle-of-the-road or winning on price. (You’ll pay $1 more per pound for peaches at Whole Foods compared to what you’d spend at Sprouts, for example.) The chart above shows that Whole Foods won or tied four out of the twelve Dirty Dozen categories, and came in second for another four.

Organic cherries and nectarines are ghosts of our imagination.

Whole Foods is the only place you’ll actually find organic cherries and nectarines.

If you don’t have a Whole Foods in your area, you might be out of luck on cherries and nectarines. Try a local farmer’s market and godspeed.

TIP: Order organic cherries and nectarines for Whole Foods pickup or delivery if the store shelves are bare. Sometimes you can find these on Amazon (through Whole Foods) if you’re lucky!

Sprouts wins (almost) all the gold and silver medals for overall most affordable organics. 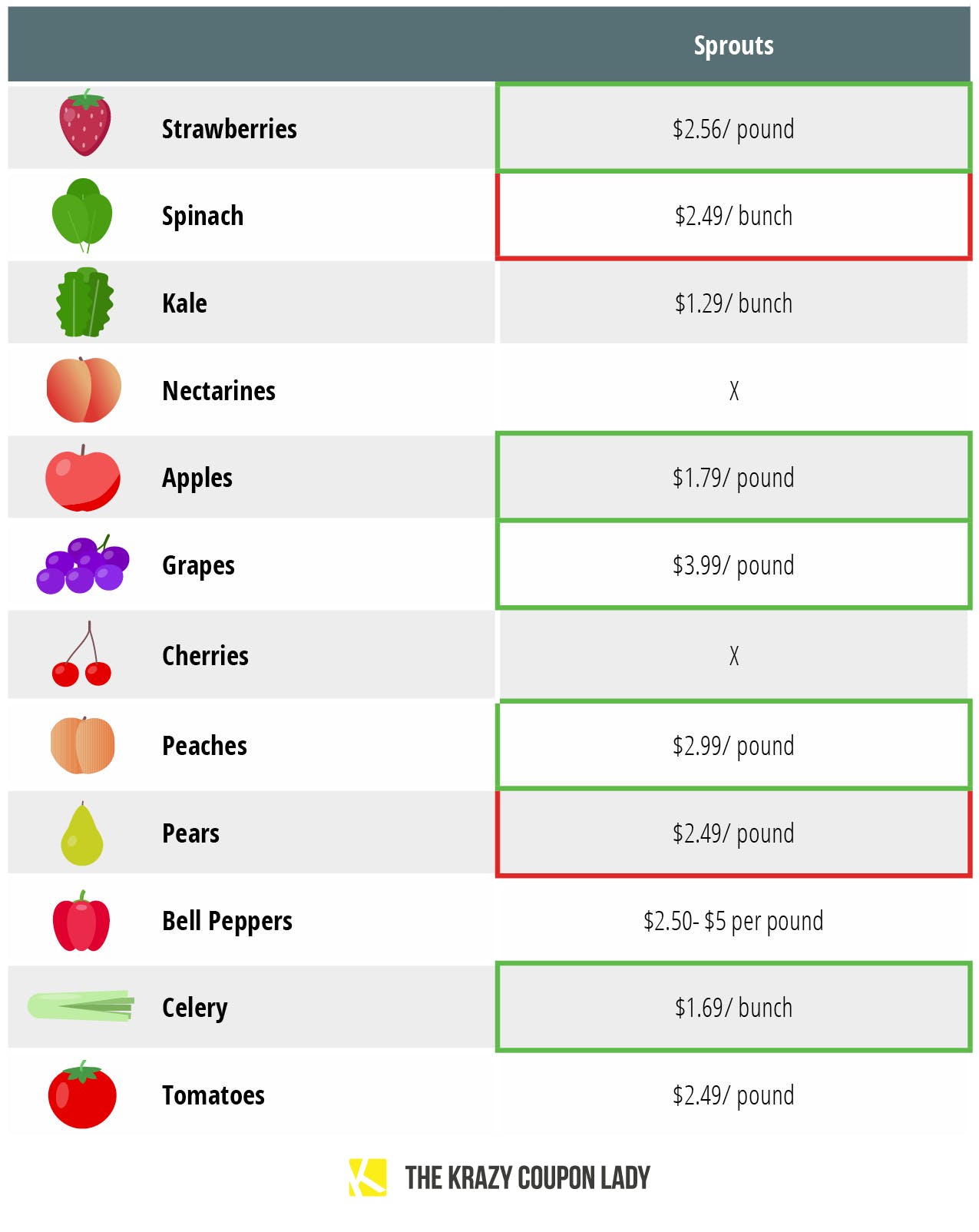 Sprouts and Whole Foods come in neck and neck, but Sprouts wins on price overall. Especially where organic strawberries, apples, grapes, peaches, and celery are concerned, as you can see with the green highlights in this chart.

Sprouts is most expensive for spinach and pears, so for those two they’re nowhere in the ballpark, as you can see with the red highlights on the chart above. But they come in solidly as the cheapest option overall for organics. That’s because even if they didn’t win, Sprouts is the second runner-up on lowest price for most of these items, too. 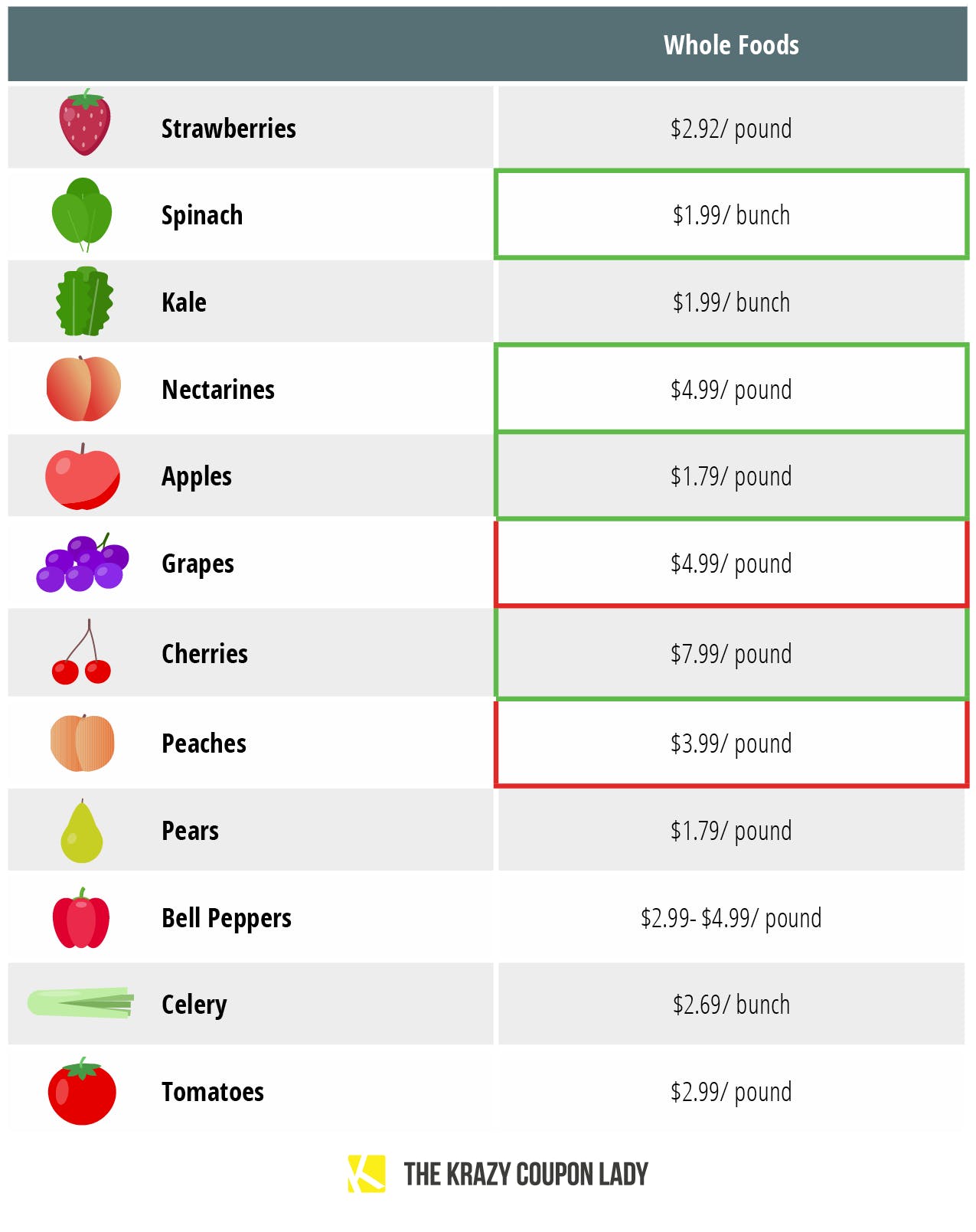 Whole Foods’ price on organic apples is the exact same per pound as Sprouts’, so either option works. These four produce items are clear winners, though, so you can’t go wrong if you get them at Whole Foods. 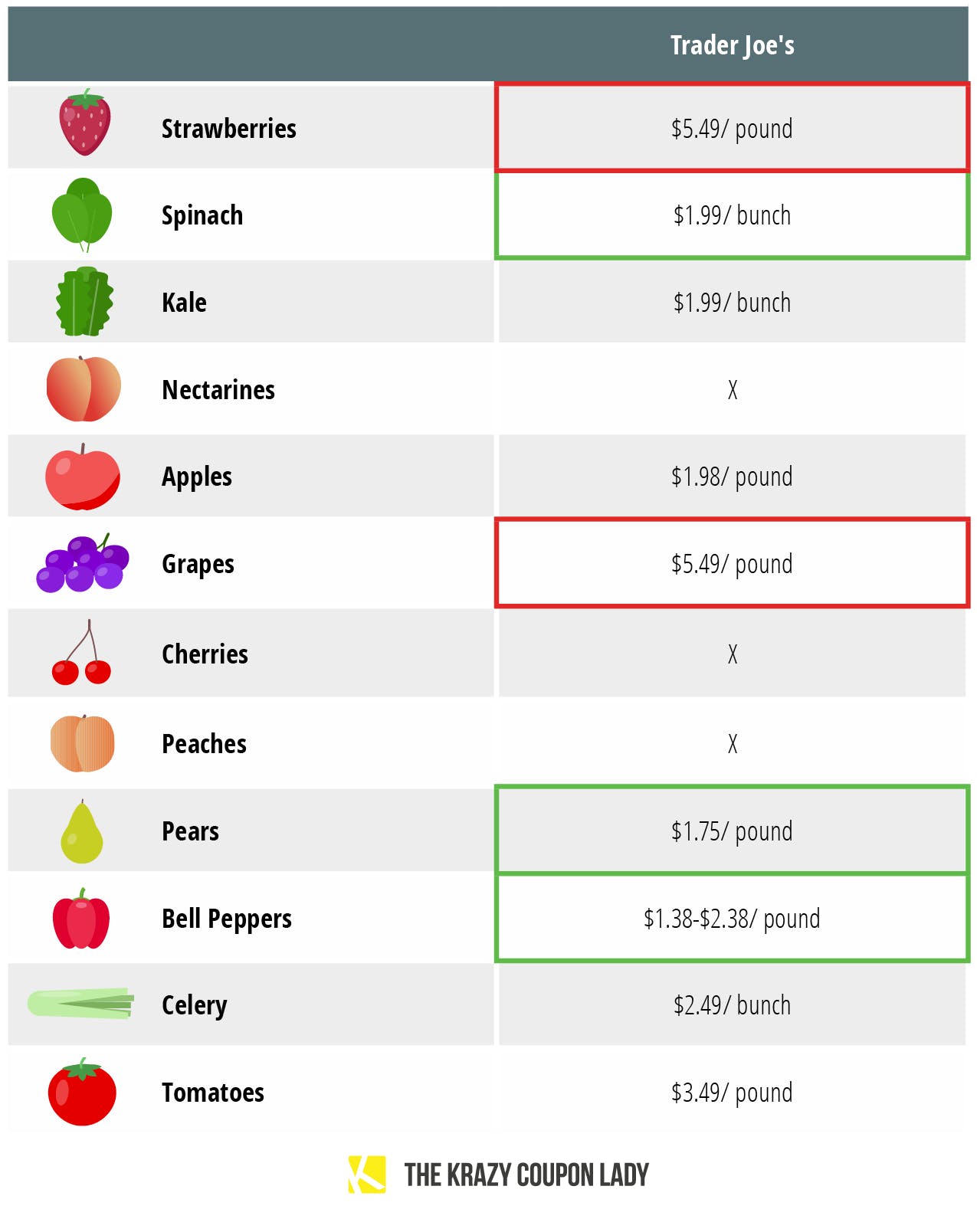 Green bell peppers are the star of the Trader Joe’s show, at over $1 cheaper than at Sprouts. Trader Joe’s ties with Whole Foods on spinach prices, so you can feel good grabbing it at either store, but Trader Joe’s only sells it by the bag (more on this soon!).

Buy organic peaches at Sprouts (or Kroger if you must). 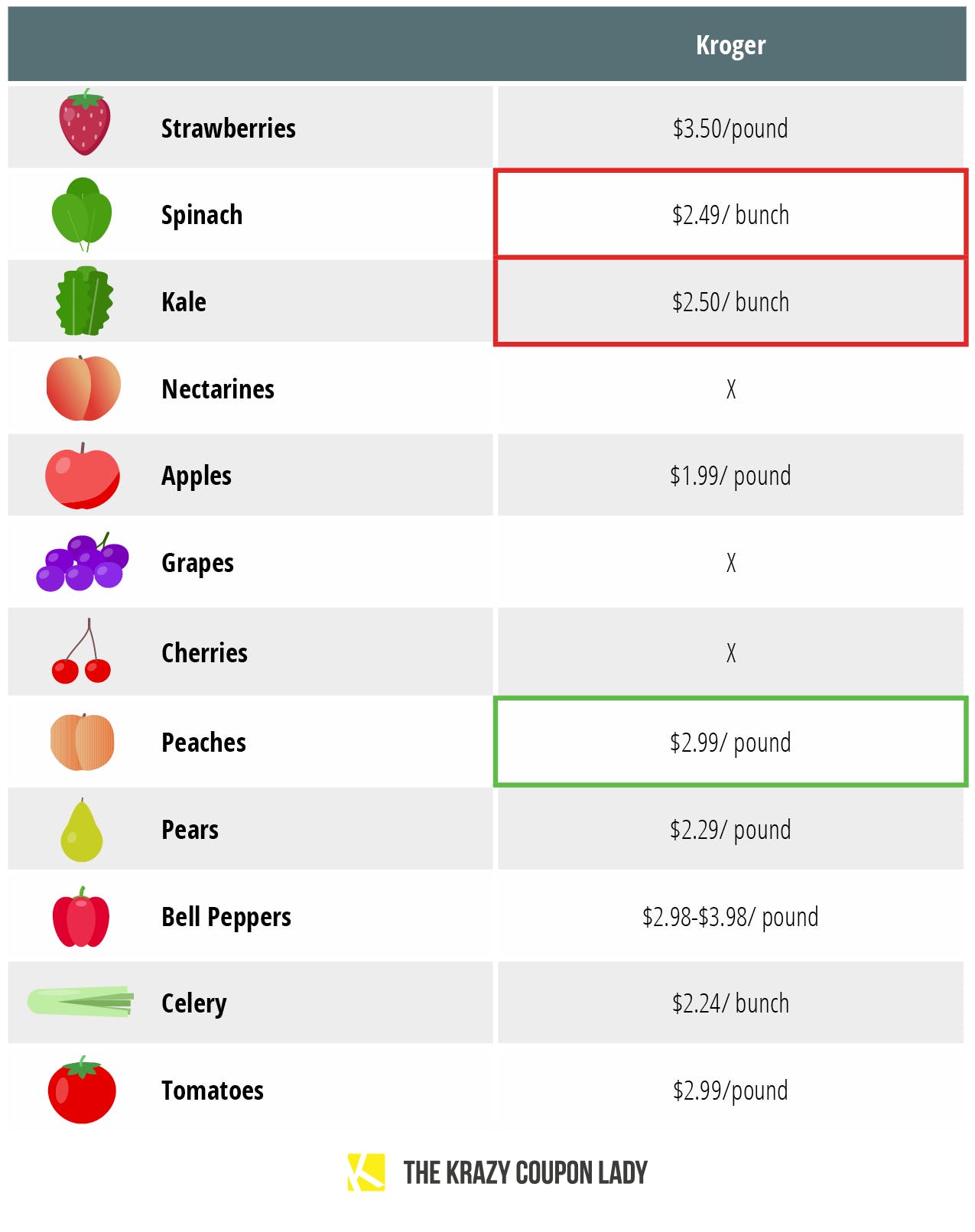 Organic peaches are the only item Kroger offers at the lowest price compared to the other stores. But Sprouts offers them at the same price point, so you could just get them at Sprouts when you’re getting everything else.

Buy organic kale at Aldi, but only if you’re going there anyway. 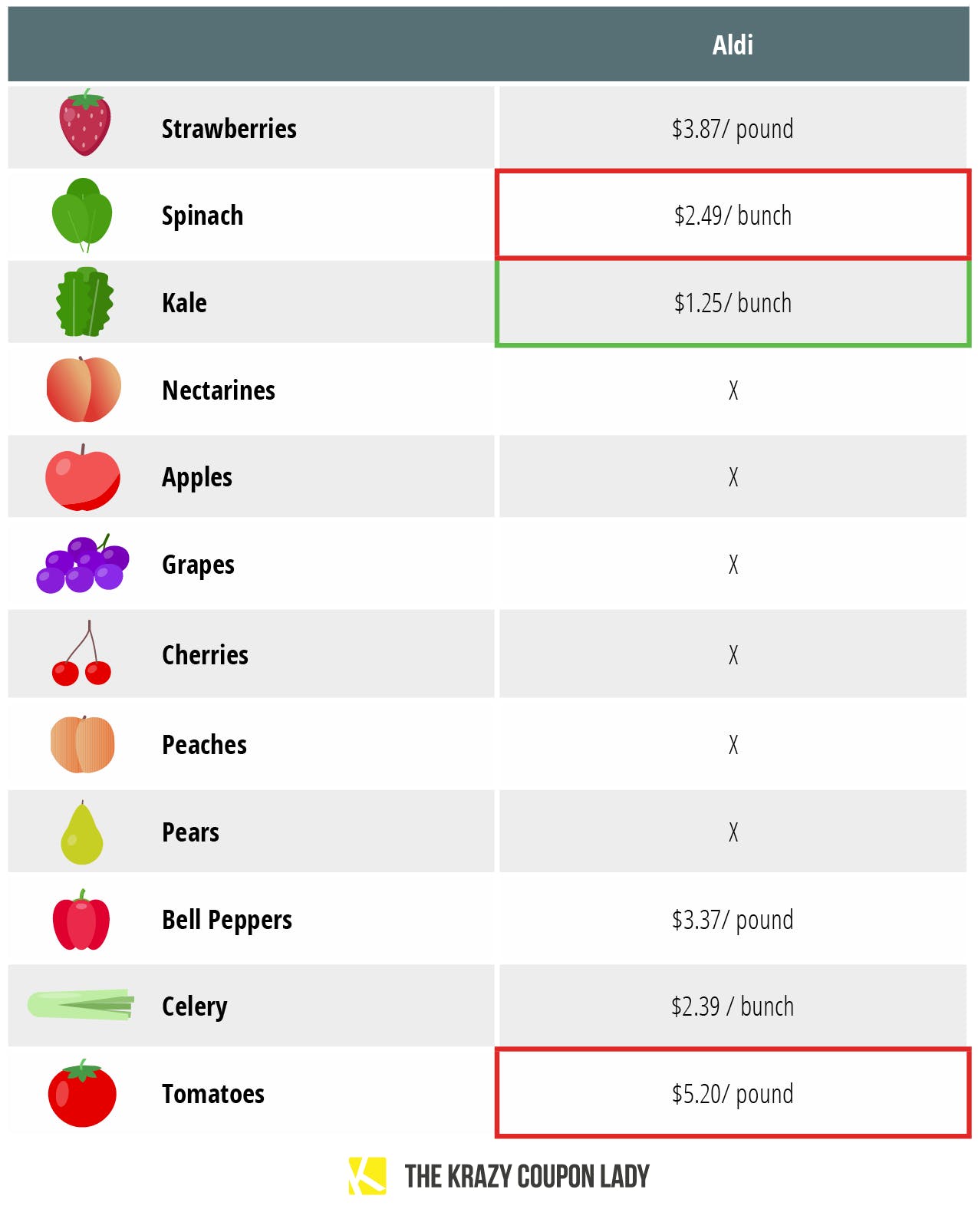 Organic kale is $0.04 cheaper at Aldi than it is at Sprouts. So, if you’re at Aldi for other items on your list, go for it. But it’s not worth a special trip.

Aldi usually shines for low prices, and for produce prices, specifically. But when it comes to organics, Aldi’s prices aren’t the best, but they’re also not the worst. They’re just meh.

Walmart’s organics section is weak, but grab tomatoes when you’re there. 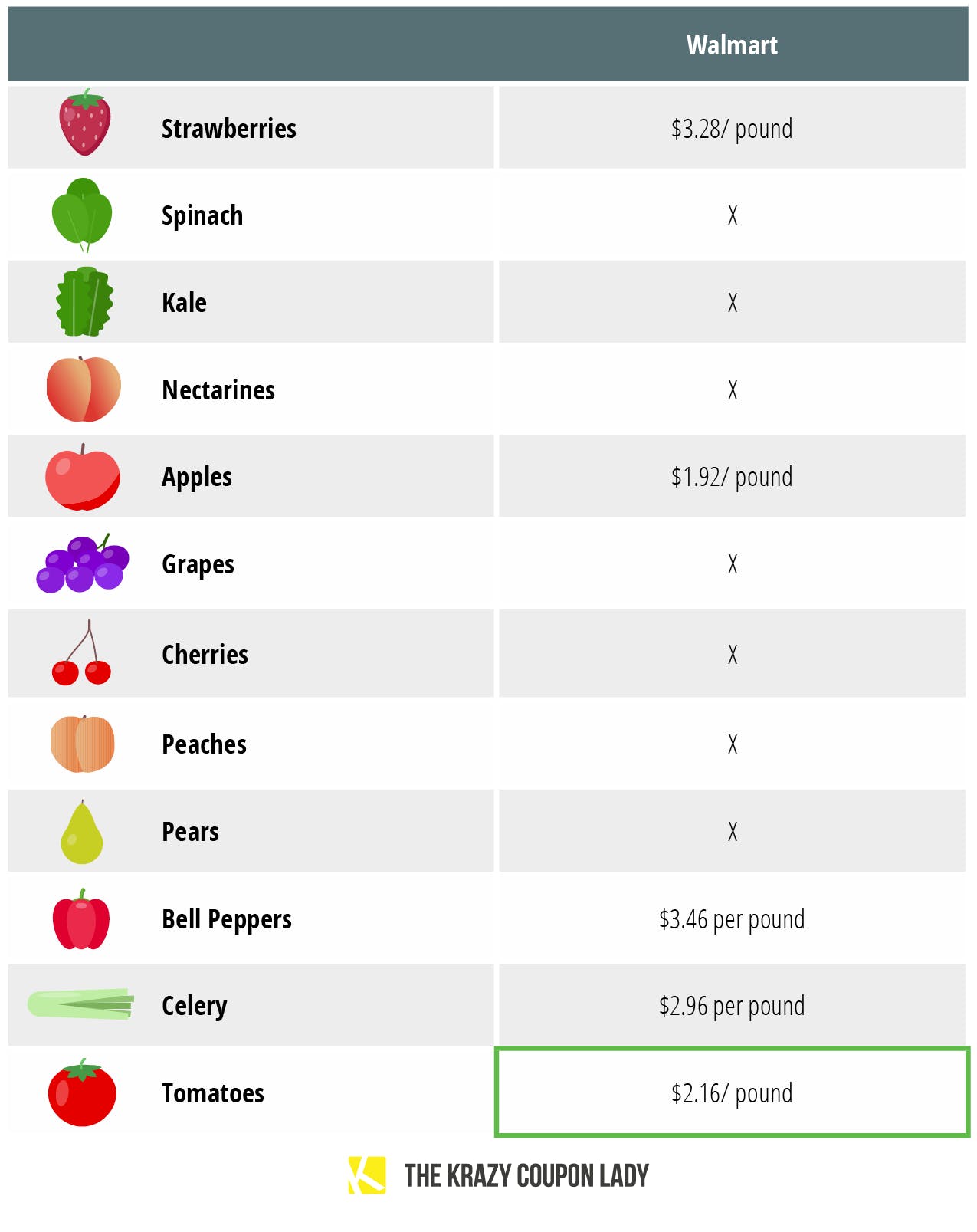 It’s not your imagination; Walmart’s organics section looks like a total afterthought. That said, I know you’re going there for other things anyway, and you’ll save $0.33 per pound on tomatoes compared to Sprouts. Be sure to stock up when you go!

Albertsons’ Dirty Dozen prices are disconnected from the reality of our budgets. 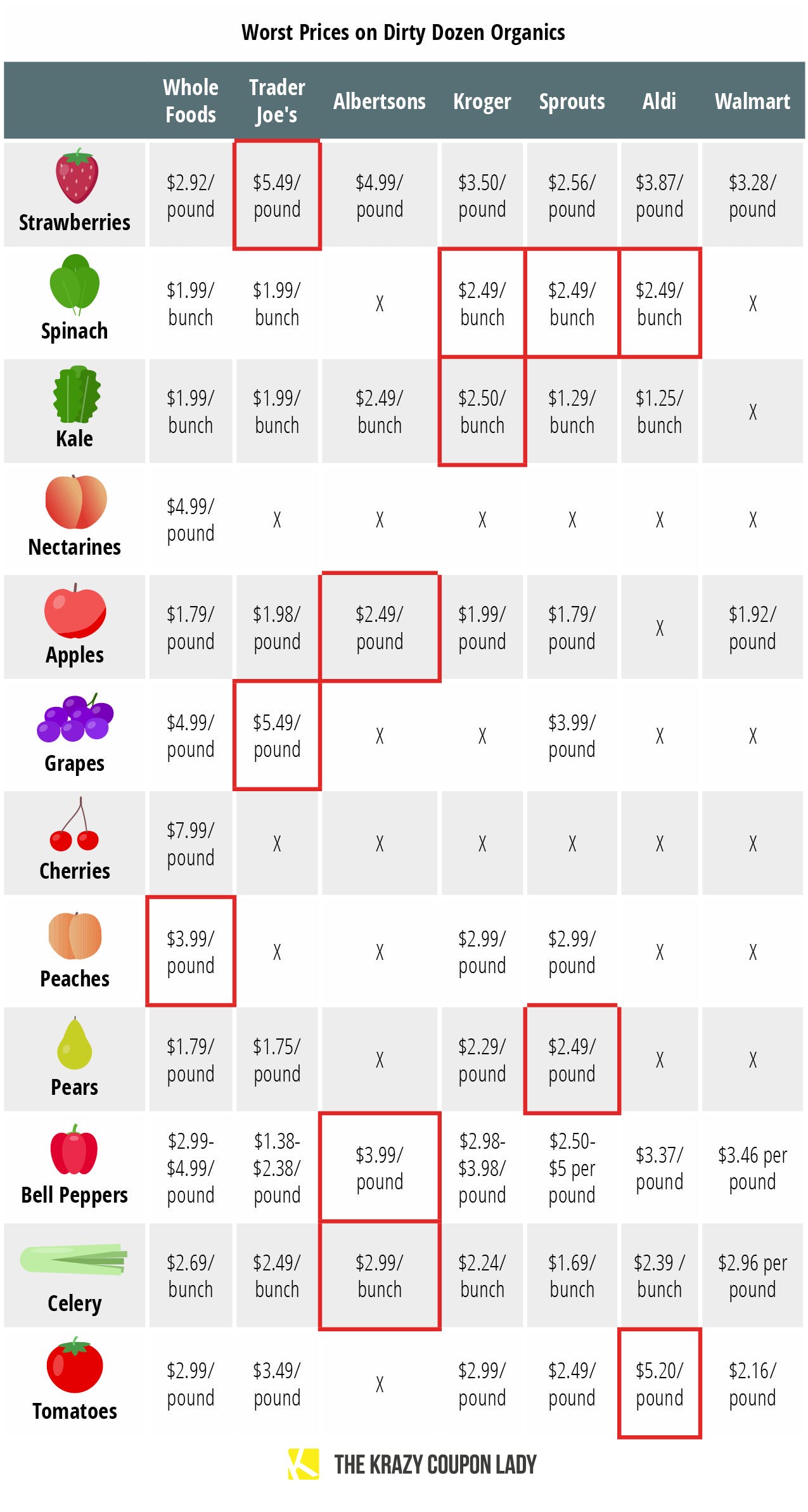 The Albertsons family of stores (Safeway and Vons included) has some ground to make up in the organic produce game. They come in overall most expensive with no items in the “least expensive” category at all. When you buy spinach and kale by the bunch, you’ll be removing stems when you go to use the greens. One bunch of spinach or kale weighs roughly 5 – 6 ounces. Of course, the weight of the bunches will vary since they’re not sold by weight. But if one bag of spinach (or kale) weighs 5 or 6 ounces, you might get more value from the bag, because the full weight is greens you’ll use, no stems.

If you want a more dialed-in approach, grab a single bunch of spinach or kale and weigh it at the store. Then compare its weight with the weight of a bag of the same. Factor in the stems you’ll remove and go from there! 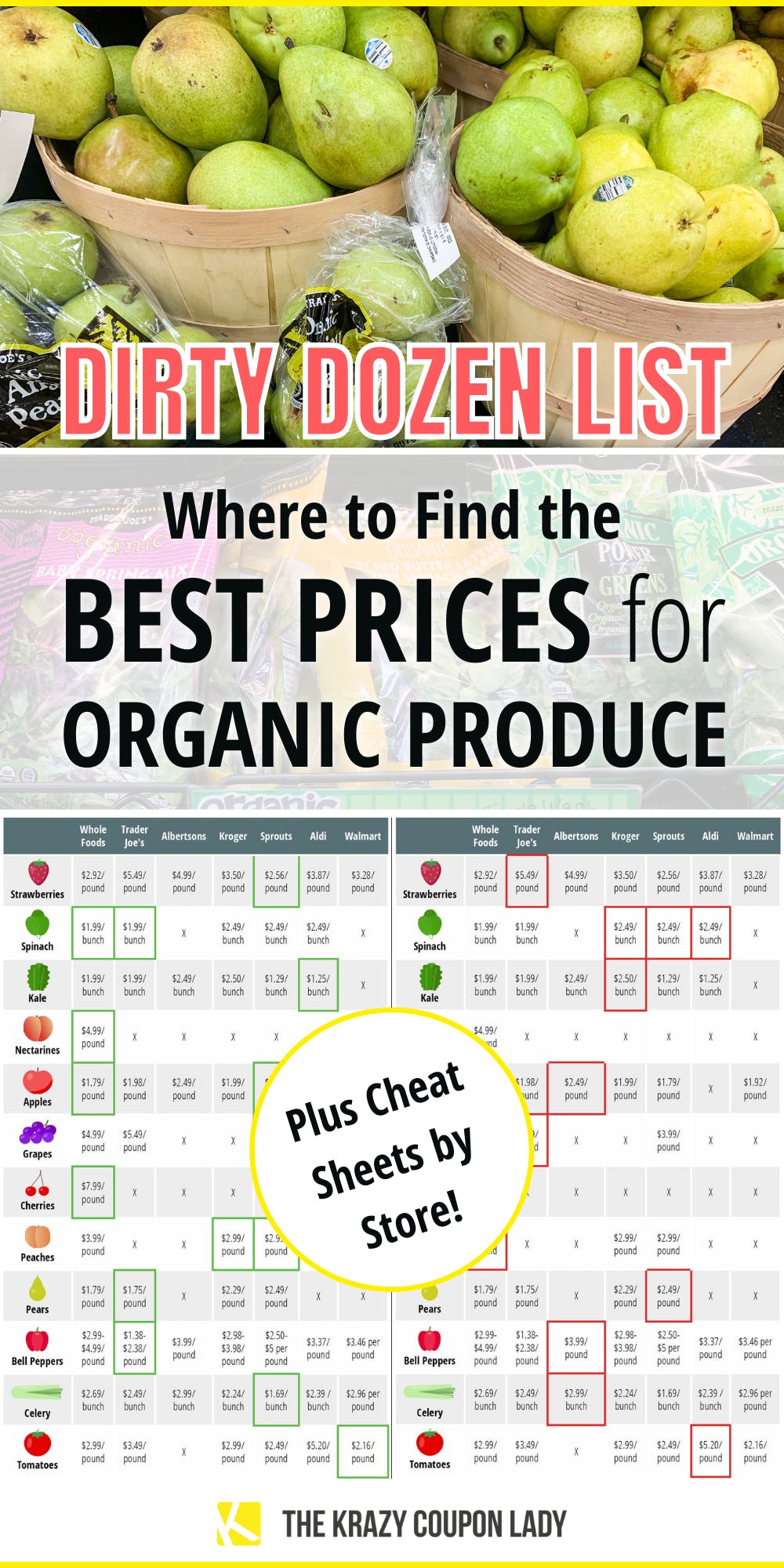 up next
22 Ways to Save Money at Whole Foods
Related articles
Misfits Market vs. Imperfect Foods: Comparing Apples to Apples