A Guide to Magic Mixies Toys and Wher...

Just like that, so many of us are already planning out our holiday gift purchases. You know what that means — that kids, too, are already busy making their wish lists. This upcoming gift-giving season, don’t be surprised if something called Magic Mixies pops up on one or two of your kids’ lists. The Magic Mixies Crystal Ball is bound to be the hottest interactive toy of the season.

Bookmark our KCL toy deals page and download the KCL app so we can show you all the current deals on Magic Mixies. We’ll send you alerts whenever new deals drop.

What is Magic Mixies? 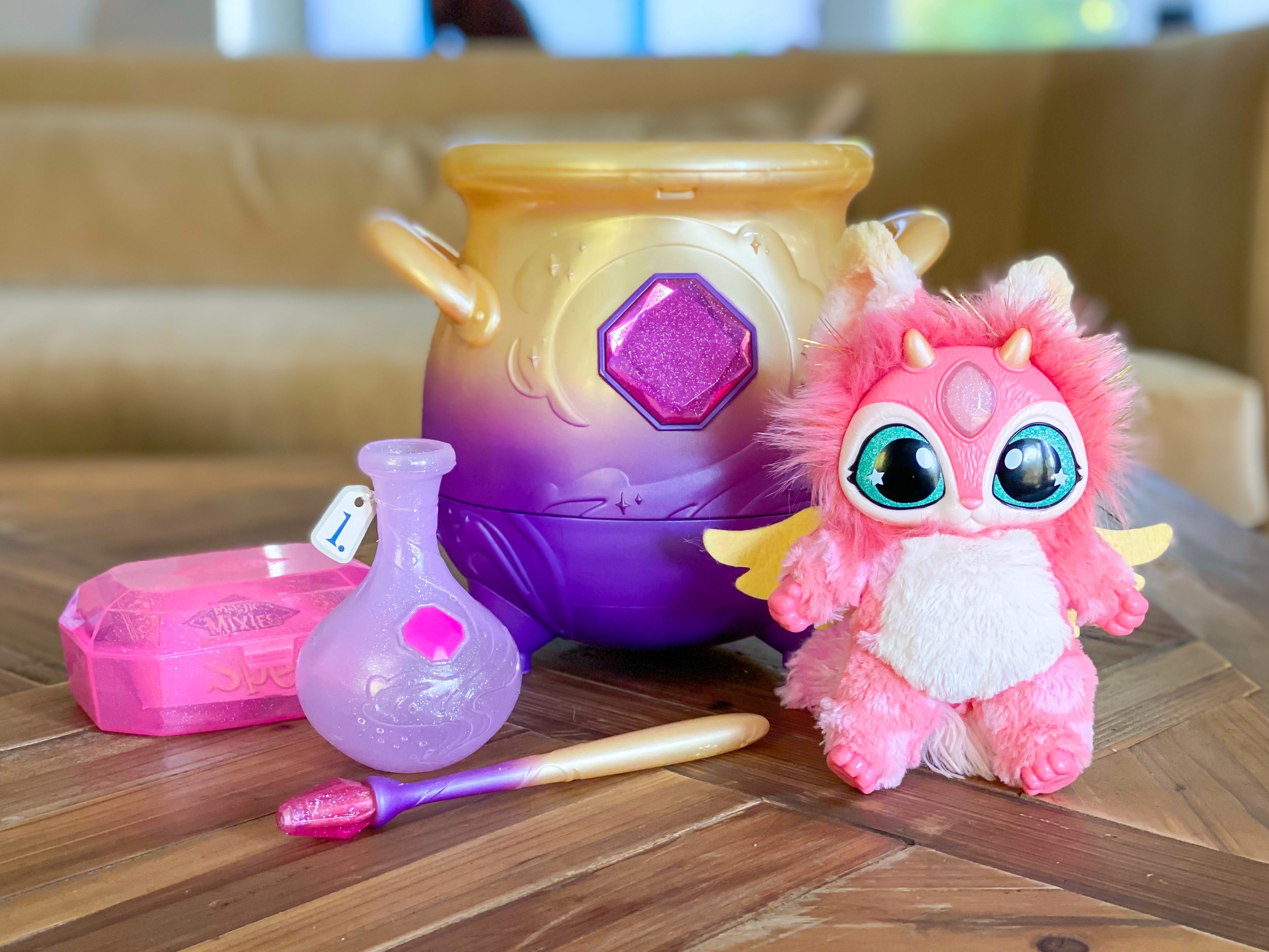 Moose Toys’ Magic Mixies is a new toy that has been on the scene since last holiday season — for most of which it was sold out. The original toy was called the Magic Mixies Misting Cauldron. It originally came with a cauldron, a magic wand, corresponding instructions, and potion packets to cast the “magic spell” and make the Magic Mixie “come to life.”

The purpose of this toy is for children to experience “real magic,” using potion packets and the magic wand to make the little Magic Mixies stuffed animal appear.

Listed as being for children ages five to eight, the new iteration of the toy is called the Magic Mixies Magical Misting Crystal Ball. It now features over 80 lights, sounds, and reactions. When the “spell” is all said and done, your child ends up with an adorable, furry little pet with fortune-telling capabilities.

Related: The Target Top Toys for 2022 List Has Arrived & It’s Time to Shop 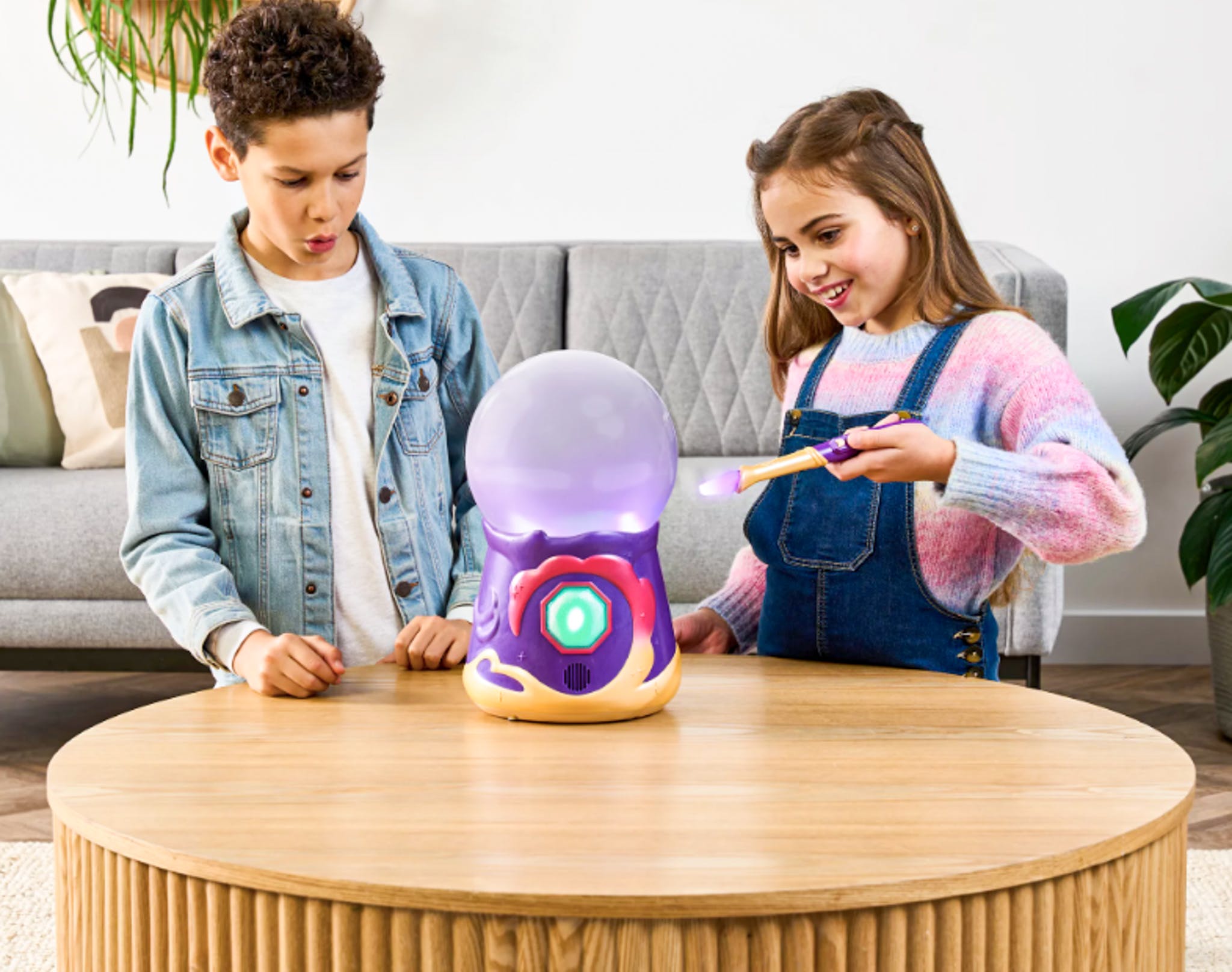 The entire fun in Magic Mixies Misting Crystal Ball is “creating” the Magic Mixie. In order to do so, children have to follow the instructions, like mastering the correct wand movements. They can say the correct commands at the right times and use the packets of ingredients in the correct order. The Crystal Ball magically responds to each of the wand’s movements, and if done correctly, the wand will turn the appropriate color as cited in the instructions.

Lastly, once all the ingredients have been added and the wand movements are properly done, children must say the magical words “MAGICUS MIXUS!” to bring their Magic Mixies to life.

After quite a show of mist, colors, and magical sounds, it all clears away to reveal an interactive plush pet with light-up gems on its forehead. To remove the Magic Mixie for the first time, an adult’s help is required to cut the zip ties that keep it in place inside the Crystal Ball.

The Magic Mixies Magical Misting Crystal Ball can perform spells, play interactive games, tell fortunes, and answer “yes or no” questions by lighting up the gems on its forehead. Once Magic Mixies is revealed and removed from the Crystal Ball, the sphere can be used as a night-light, too. 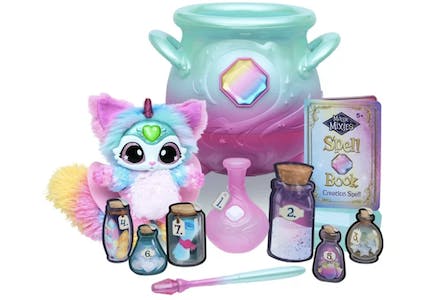 Where to buy the Magic Mixies Crystal Ball: 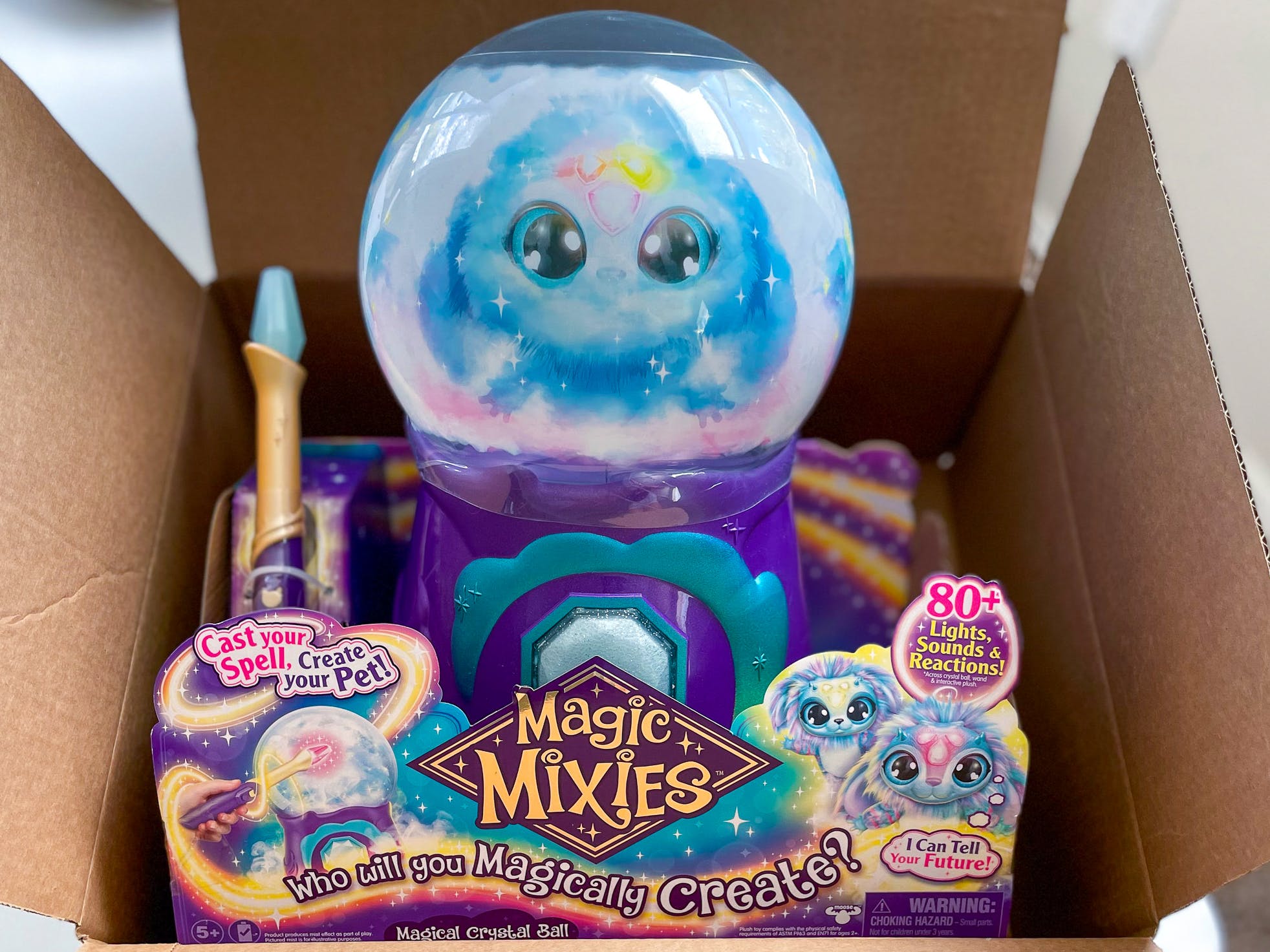 With Magic Mixies being in such high demand, it can be tricky to locate where they are in stock. Below, we’ve listed a few of the places that have Magic Mixies Crystal Ball in stock currently. Plus, we’ll be updating it all the time as it gets closer to the holiday season.

If you see that Magic Mixies are in stock now and you know your child wants one, your best bet is to buy it sooner than later. Because they will sell out. In fact, at my local Target, there is not one Magic Mixies Magical Misting Crystal Ball or Magic Mixies Cauldron in stock. The store manager said he was expecting three more but couldn’t tell me when they would arrive. And when they do arrive, he said they will be gone by end of day.

Most expensive of all the options is Kohl’s, which currently has the pink Crystal Ball in stock. However, there are some work-arounds to the price point. No, unfortunately, it’s not eligible for coupon usage, but you can use and then earn Kohl’s Cash on this purchase.

On Camp.com, you’ll find the pink Magic Mixies Magical Misting Crystal Ball currently available. However, the blue version is currently sold out on Camp.com, though it’s possible it may come back in stock. You can sign up for in-stock notifications if you’re more interested in the blue one.

Target has a Magic Mixies exclusive to their stores. It’s called Magic Mixies Moonlight Magic Crystal Ball, this adaptation of the toy features an exclusive glow-in-the-dark Mixie. This Mixie is still a fortune teller like the others, so don’t worry.

Over at Walmart, the blue and pink Magic Mixies Magical Misting Crystal Ball are currently in stock. Be careful shopping for Magic Mixies at Walmart though. In the past, we’ve seen Walmart.com mark Mixies up incredibly high — as high as $139.99 for what’s usually only $76. 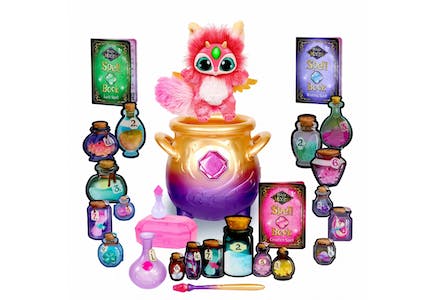 Can you use the Magical Mixies Crystal Ball toy again and again? 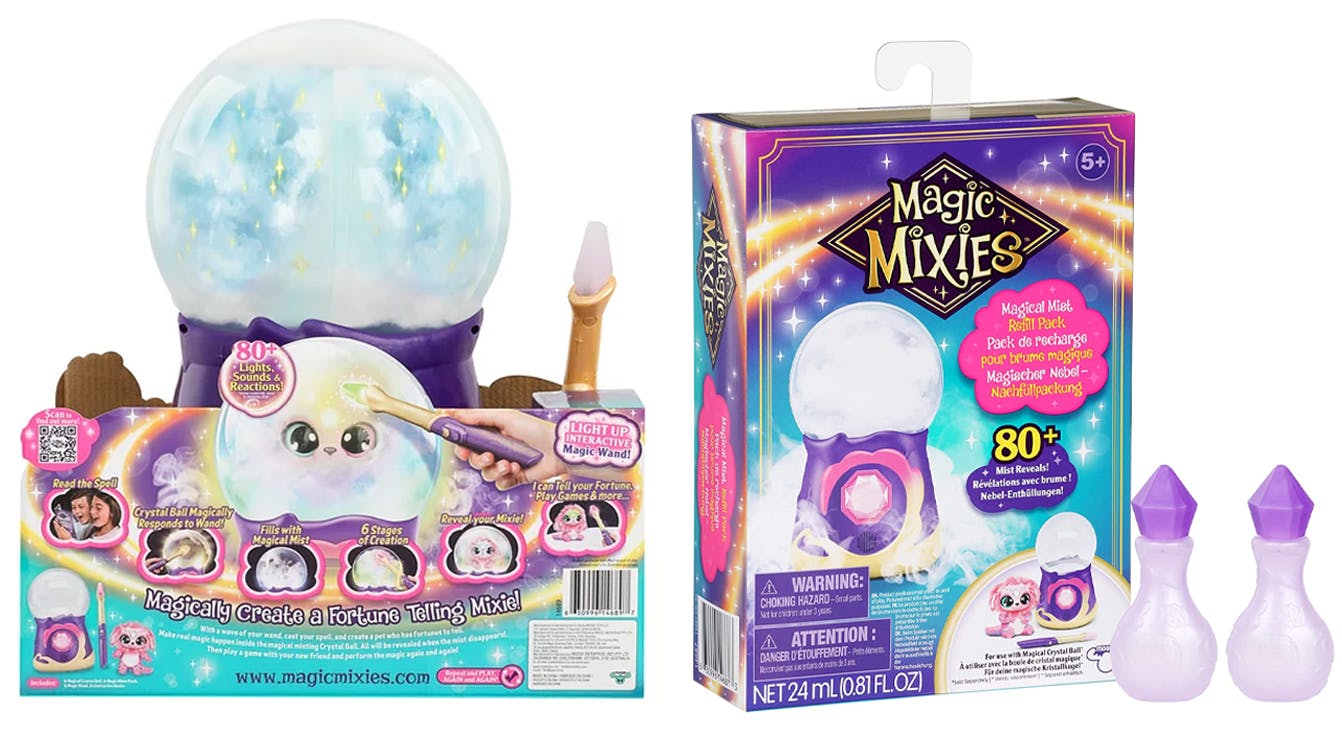 Unlike the first iteration of Magic Mixies, the Magic Mixies Magical Misting Crystal Ball can be used over and over again. Not only does it reveal the Magic Mixie upon first use, but it can also be reset into mist-filled creation mode to reveal other items inside as well.

Of course, you can perform the mist as many times as you have refill packets for (these are sold separately for $9.99). And you can also reuse the Crystal Ball infinitely as a night-light so long as you continue to charge it.

Why are Magic Mixies popular?

It’s not hard to see the appeal that Magic Mixies have amongst kids. A toy that can be unlocked with a magic potion? It’s like Harry Potter came to life!

Kids have to get the spell exactly right in order for Magic Mixies to come to life, which is another huge draw. It’s a pretty cool concept — especially when it comes with a magic light-up wand.

The other factor at play here is that Magic Mixies are all over TikTok and YouTube. And for the younger generations, the toys they see all over the internet usually means that’s the toy they want.

Does the Magical Mixies Crystal Ball need to be charged beforehand? 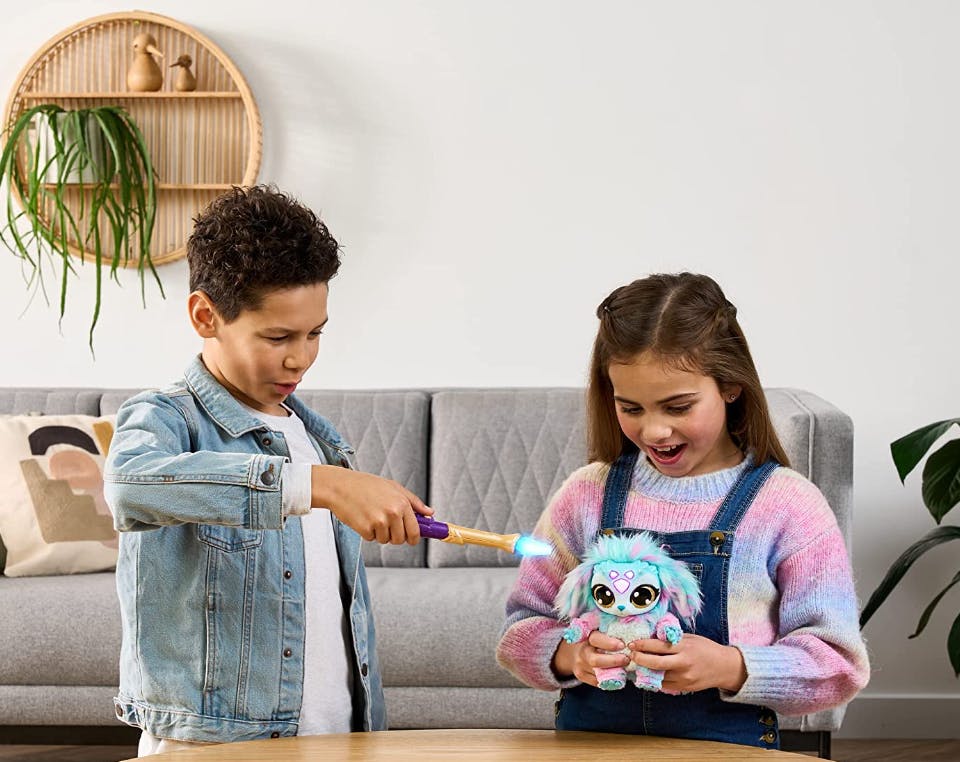 For all the parents that want to know if the Magic Mixies Magical Misting Crystal Ball needs to be charged, the answer is actually no. Unlike earlier iterations of Magic Mixies, the new version of the toy does not need to be charged. While the original Magic Mixies had to charge for an hour or two before using, the 2022 model is battery operated.

So if you’re giving this gift for Hanukkah or Christmas, you may want to plan accordingly and either include batteries or have them on hand. And note that the Magic Mixies Misting Cauldron DOES need to be charged beforehand if you purchase that one.

How does the Magic Mixies Cauldron turn on?

Once charged, use the Play Mode switch to turn on the Magic Mixies Cauldron. Select the “Create Mode (Mist)” to create your Magic Mixie. The first step is to add water by filling the potion bottle to the Fill Line and pouring the water into the Cauldron. That will “awake” the Cauldron, and you should hear bubbling and boiling sounds. Once you hear the “tap tap tap” prompt, tap the rim of the Cauldron three times with your wand. Then you go through the steps of adding the different spell ingredients one by one as outlined in the instructions.

Batteries are included with the Crystal Ball, so once everything is unboxed, turn on the wand — there is an off/on button on the wand. The wand has the Spell Button and the Mixie Button. Follow the instructions to walk through “Wand School” and follow the prompts to create your Mixie. 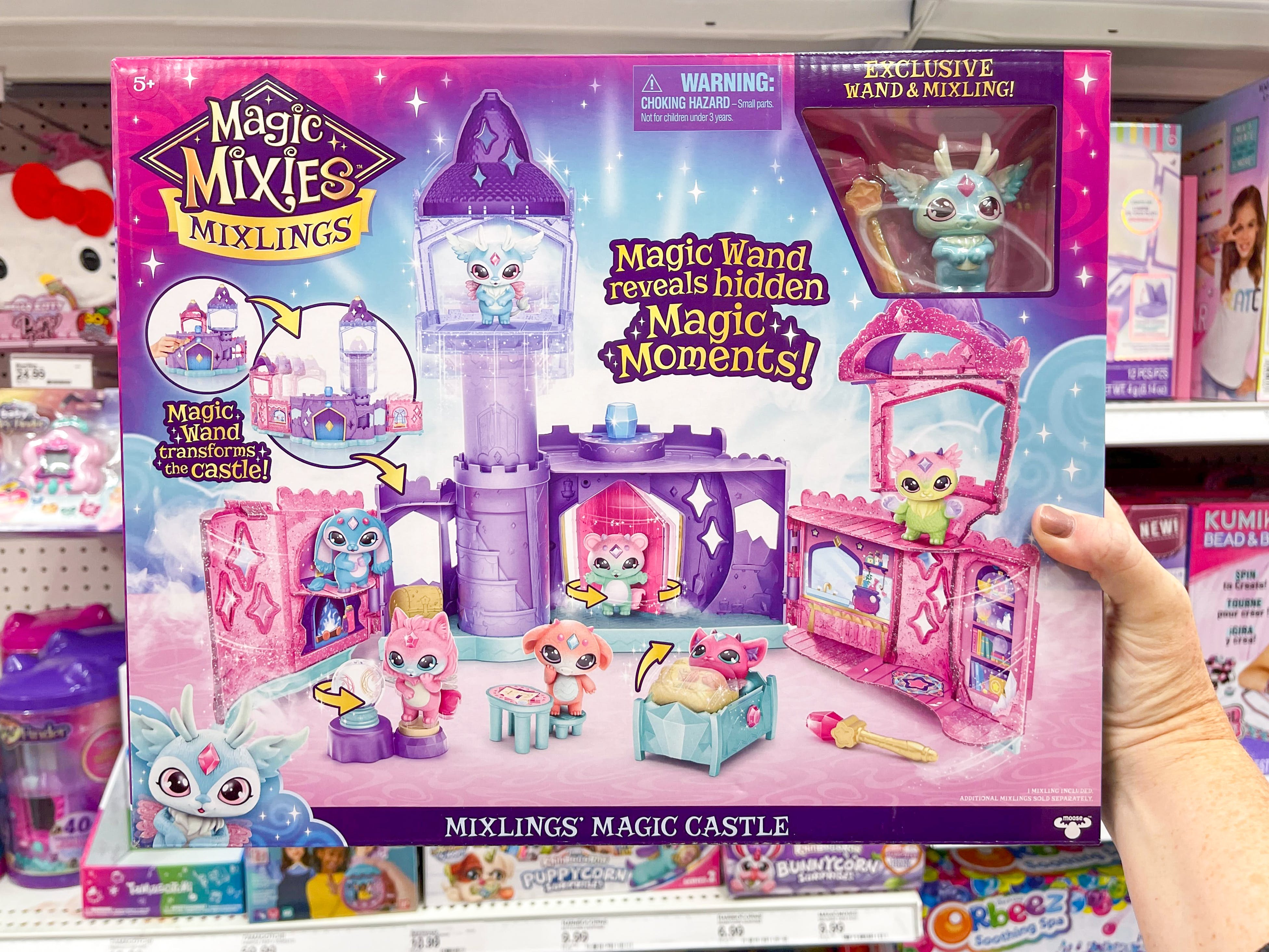 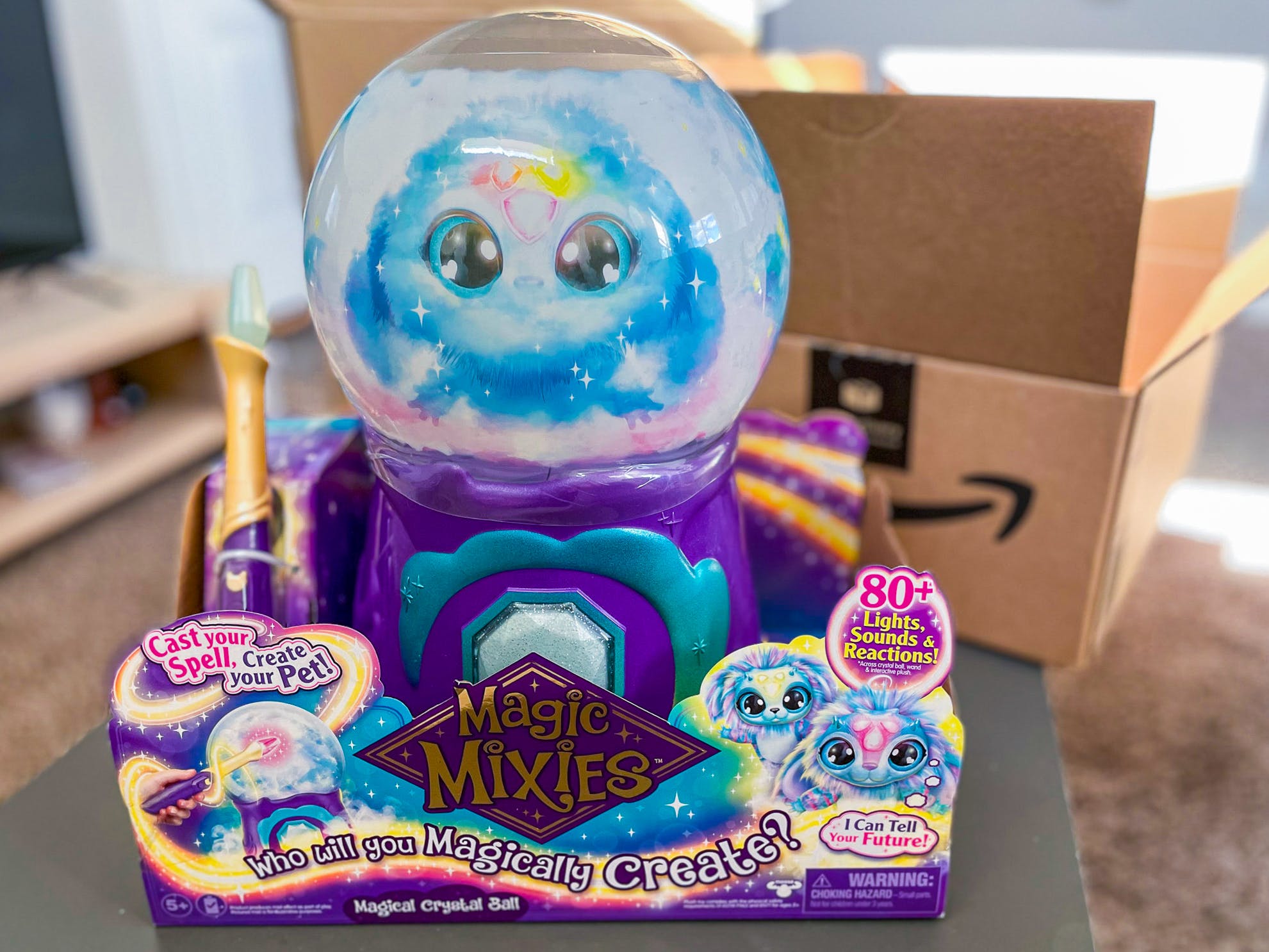