But the Arby’s Meat Mountain isn’t the only interesting item on the Arby’s menu (secret or otherwise). We have all the details for you on what it takes to order this secret menu item, along with additional Arby’s hacks for great deals, the skinny on the 2 for 6 deal, Arby’s Happy Hour, and more ways to save on Arby’s.

Use this 14-step guide to find the best Arby’s deals and coupons, learn the price of the Meat Mountain, and how you can make the most of the menu.

1. Sign up for Arby’s email list to get a coupon for 50% off a Smokehouse Brisket sandwich or Gyro with purchase. 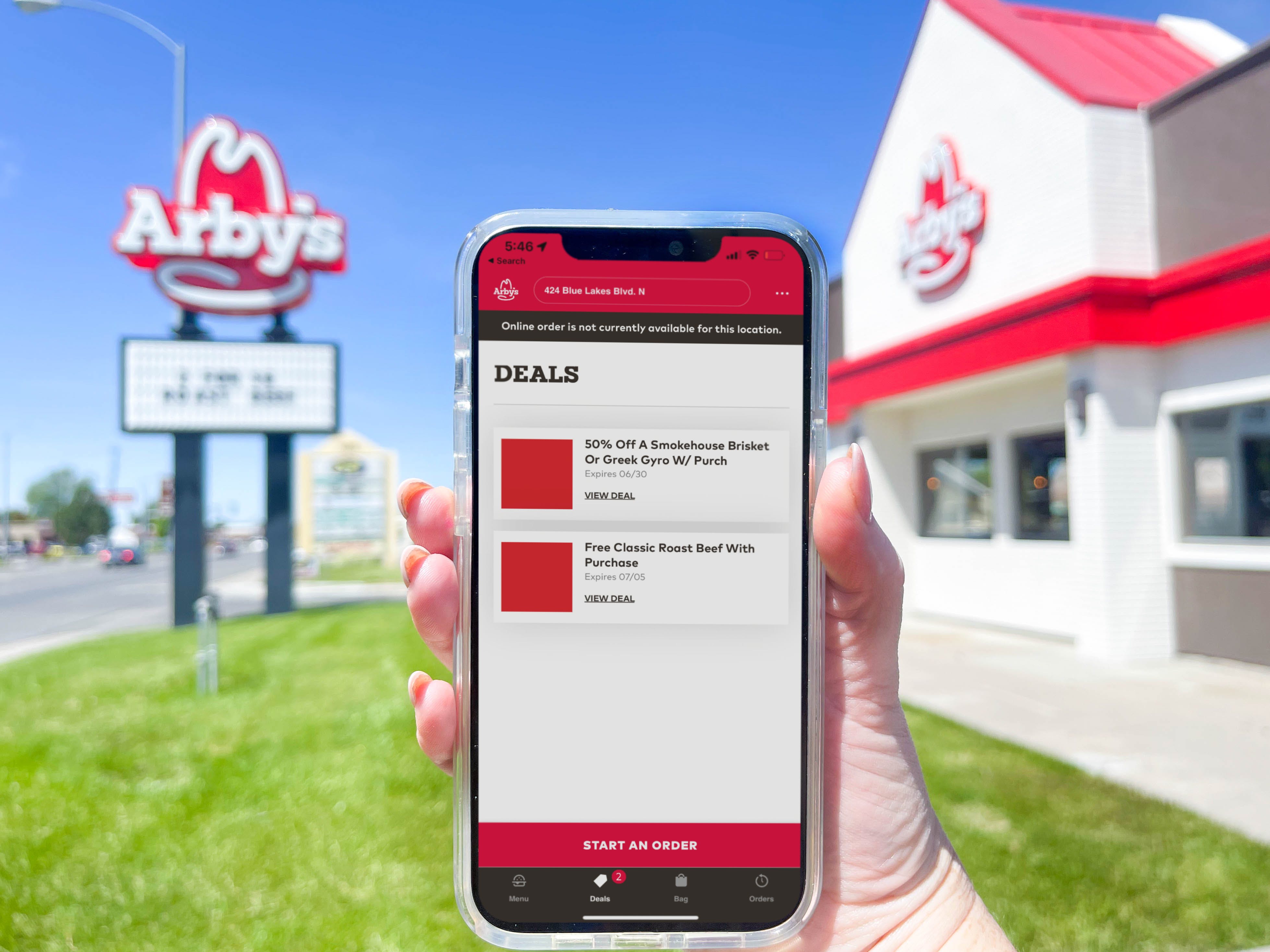 As soon as you sign up for an Arby’s account online, your 50% off voucher for a Smokehouse sandwich or Gyro will be sent to your email — or shown in the “Deals” section if you signed up through the Arby’s app (iOS / Android).

Redeem the Arby’s coupon online or in-store with purchase of another menu item.

2. Get other valuable Arby’s coupons from their email list, which will help you save on the Arby’s Meat Mountain. 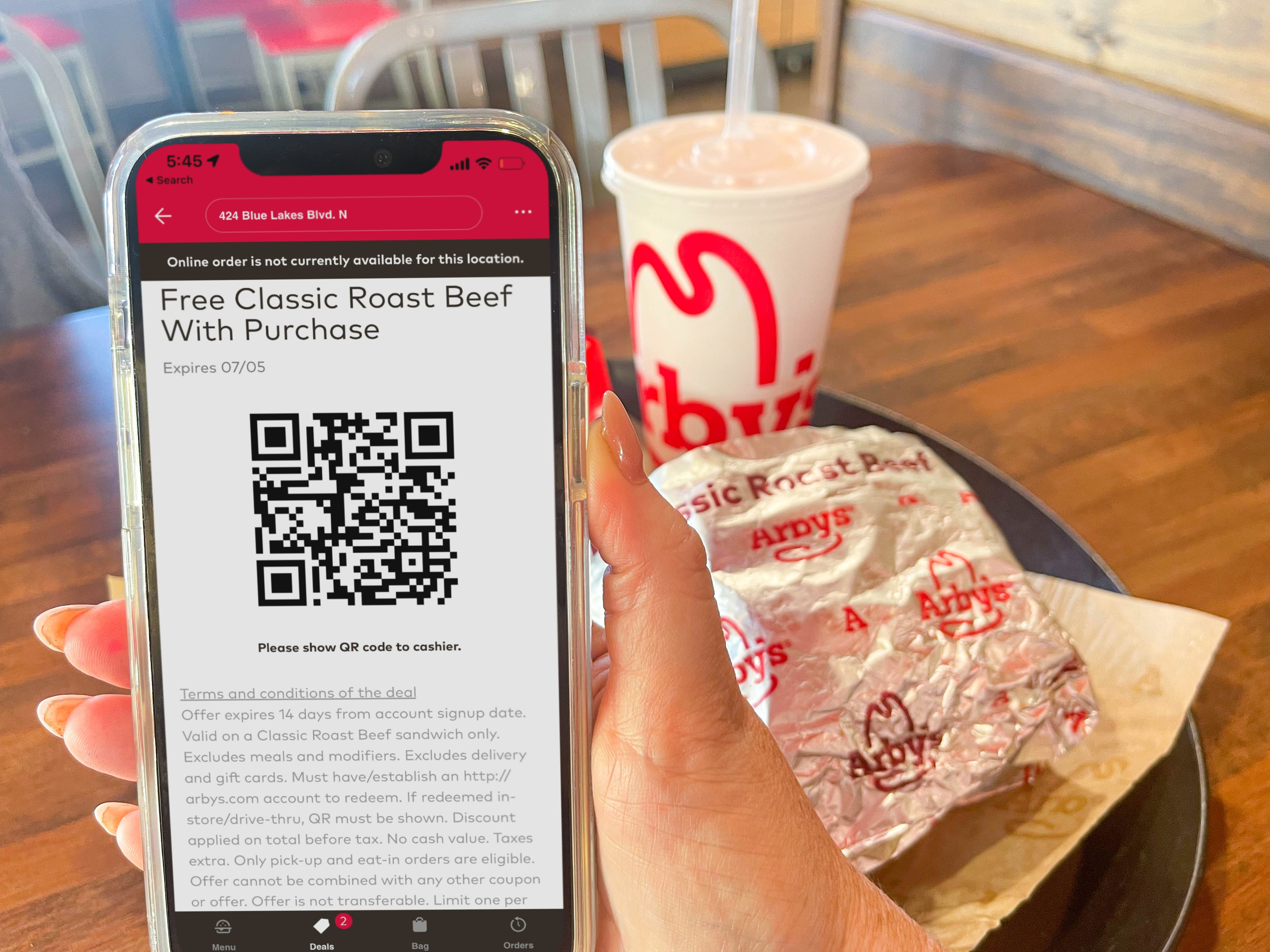 Arby’s sends their email list subscribers coupons and menu announcements about three times a week, so the perks just keep on coming.

We’ve seen coupons like two Market Fresh sandwiches for $7, BOGO sandwiches or wraps, and a free small fries and drink with the purchase of a Brisket Bacon N’ Beef.

It’s really the best way to get the best Arby’s deals. Arby’s coupons hard to find anywhere else.

3. Get the Arby’s Meat Mountain and other brag-worthy creations when you order from the Arby’s secret menu. 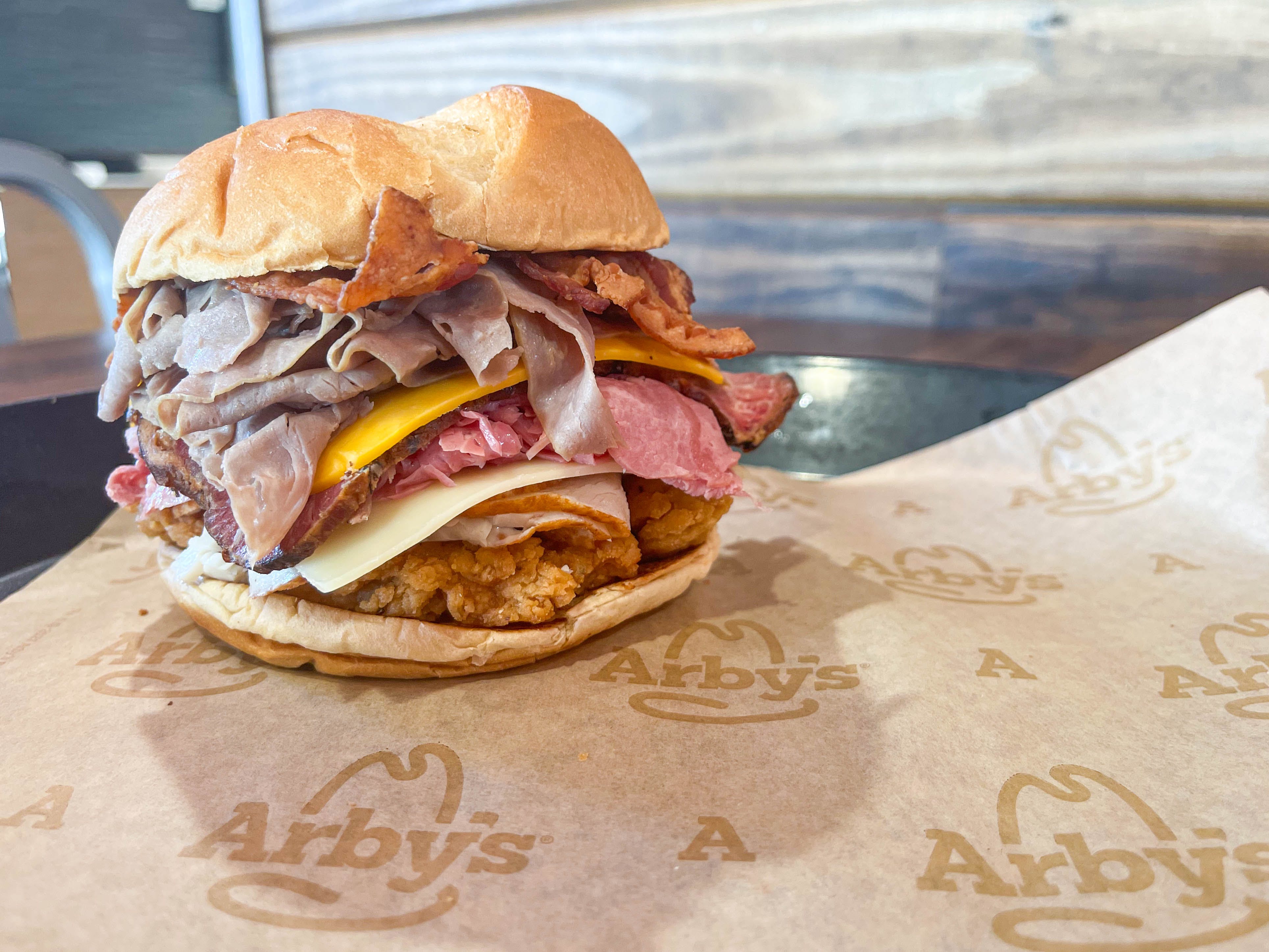 You can mix and match various meats and breads on the Arby’s menu to create some delicious combos, which is why Arby’s has one of the most extensive secret menus in the biz. Here are some of our favorite options on Arby’s secret menu.

Nothing proves “We got the meats” like The Meat Mountain secret menu sandwich.

Note: They wouldn’t make this meat-tastic burger for us at our local Arby’s, but you can try asking for a sandwich with every meat they have on the menu and then adding Swiss and cheddar cheese to it.

You can get any sandwich made with a different bread at no extra cost. We got the French Dip Swiss with an onion roll instead of the sub roll.

The White Cheddar Mac & Cheese is a new item on the menu and is only available for a limited time. You can add a little bacon on it for some added protein.

Note: If your Arby’s can’t/won’t make this for you, ask for bacon on the side (which is free) and add it yourself.

The French Dip Swiss is already pretty meaty, with layers of roast beef sitting on top of a sub roll with Swiss cheese. However, increase the protein by asking for double the meat.

4. You may have to make your own Arby’s Meat Mountain. 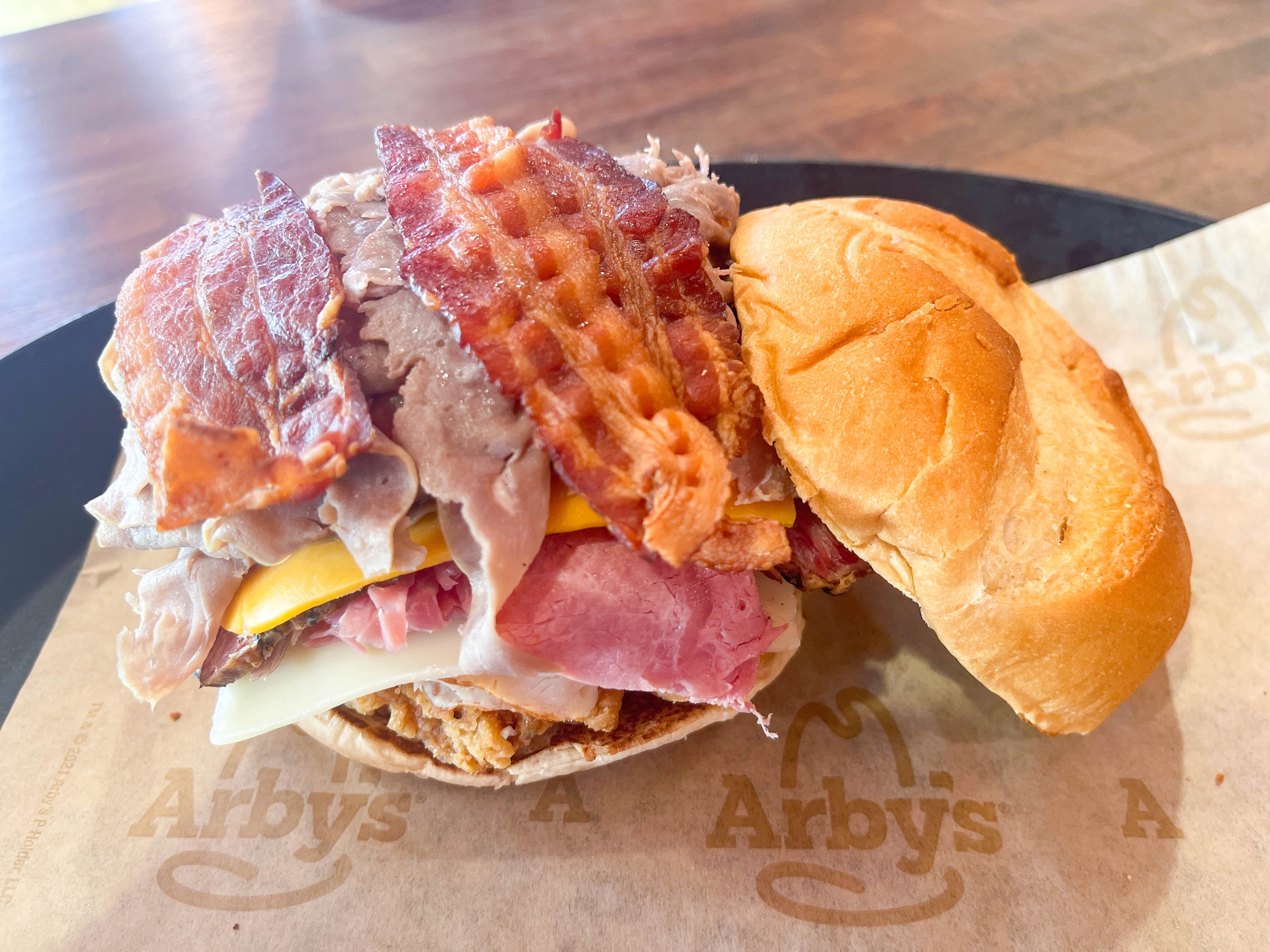 My local Arby’s wouldn’t make this meat-tastic burger, but no worries. . . you have options. You can either ask the person to give you every kind of meat and cheese, or you can individually order these menu items and put it together yourself. Fair warning: This way is more expensive, so be nice to your cashier — it may save you some cash!

If you have to, here’s what you order to create the legendary Arby’s Meat Mountain — for around $24: 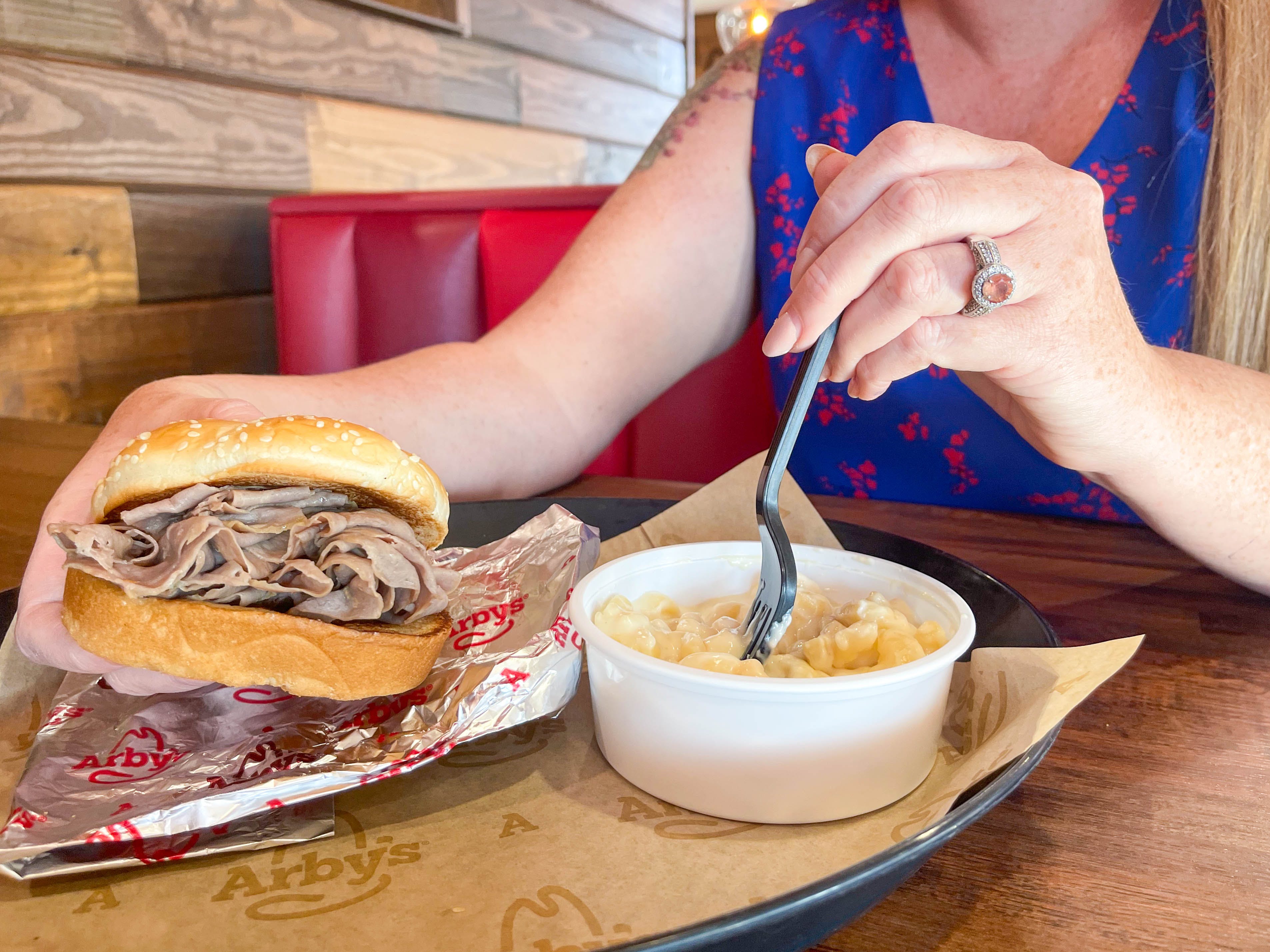 Arby’s 2 for 6 deal is one of their most popular options on the menu, and that’s because it’s a quick way to save up to 27%. Order two items from their list for just $6.

The items included in this list change depending on your location, but here are some recent items we’ve seen on the 2 for 6:

So instead of paying $8.20 for a White Cheddar Mac & Cheese and the Chicken Cheddar Ranch, you’re only spending $6 — a 27% savings!

Note: Arby’s 2 for 6 isn’t available at all locations, so give your local Arby’s a call and see if they have the deal.

6. Order a Double Roast Beef sandwich and an extra bun to save $2 on two sandwiches. 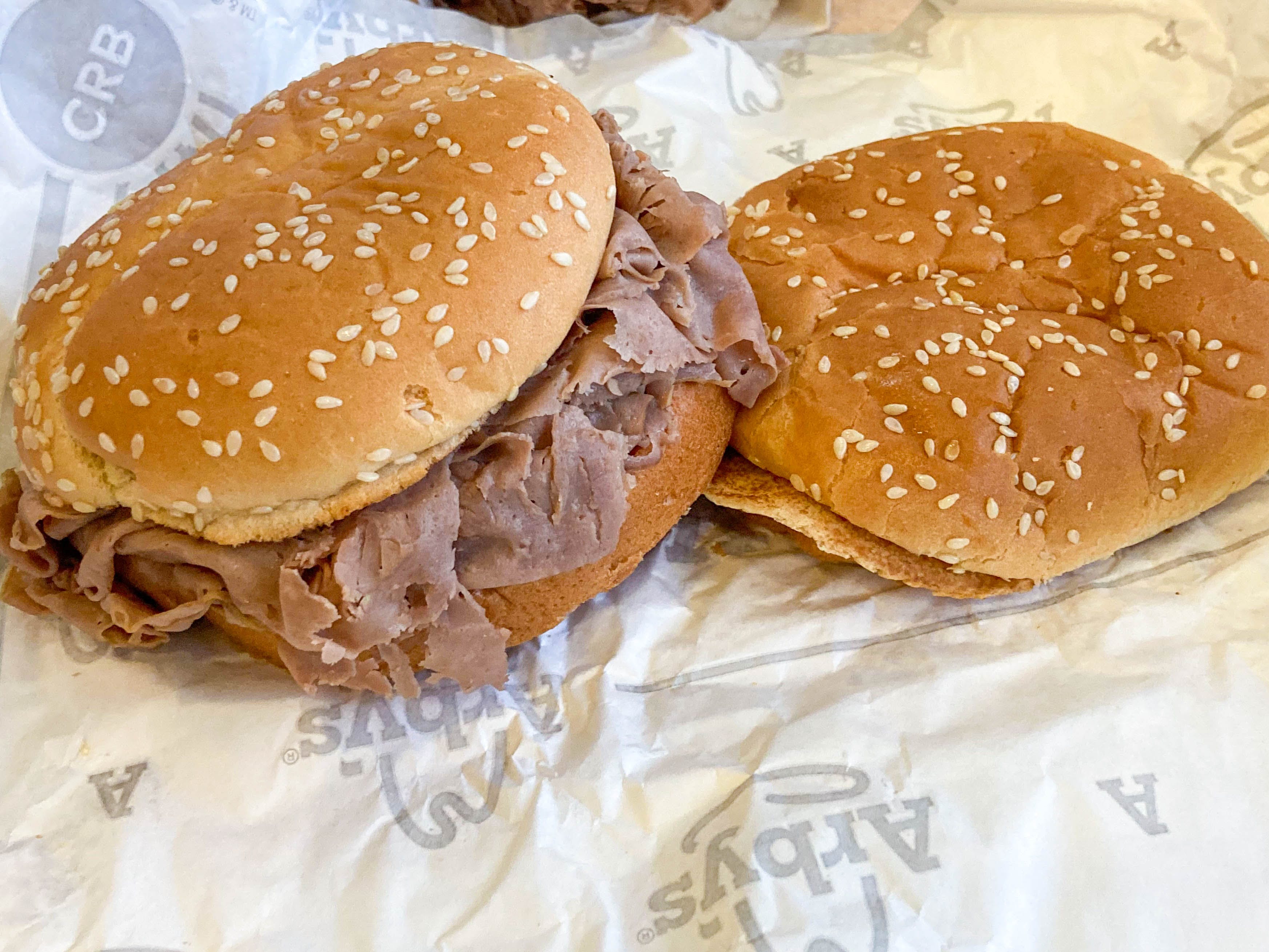 The Double Roast Beef sandwich is $6, with exactly twice the meat of the Classic Roast Beef Sandwich (reg. $4).

To pocket $2 in savings, get the Double Roast Beef and ask for an extra bun at no cost. Boom. Two sandwiches!

TIP: Want to add a tasty crunch to your sandwich or wrap? Customize your favorite Arby’s sandwich by adding some onion tanglers — free of charge. (They’re Arby’s version of crispy fried onions.)

7. Go during Arby’s Happy Hour to get sliders, drinks, fries, and shakes for just $1. 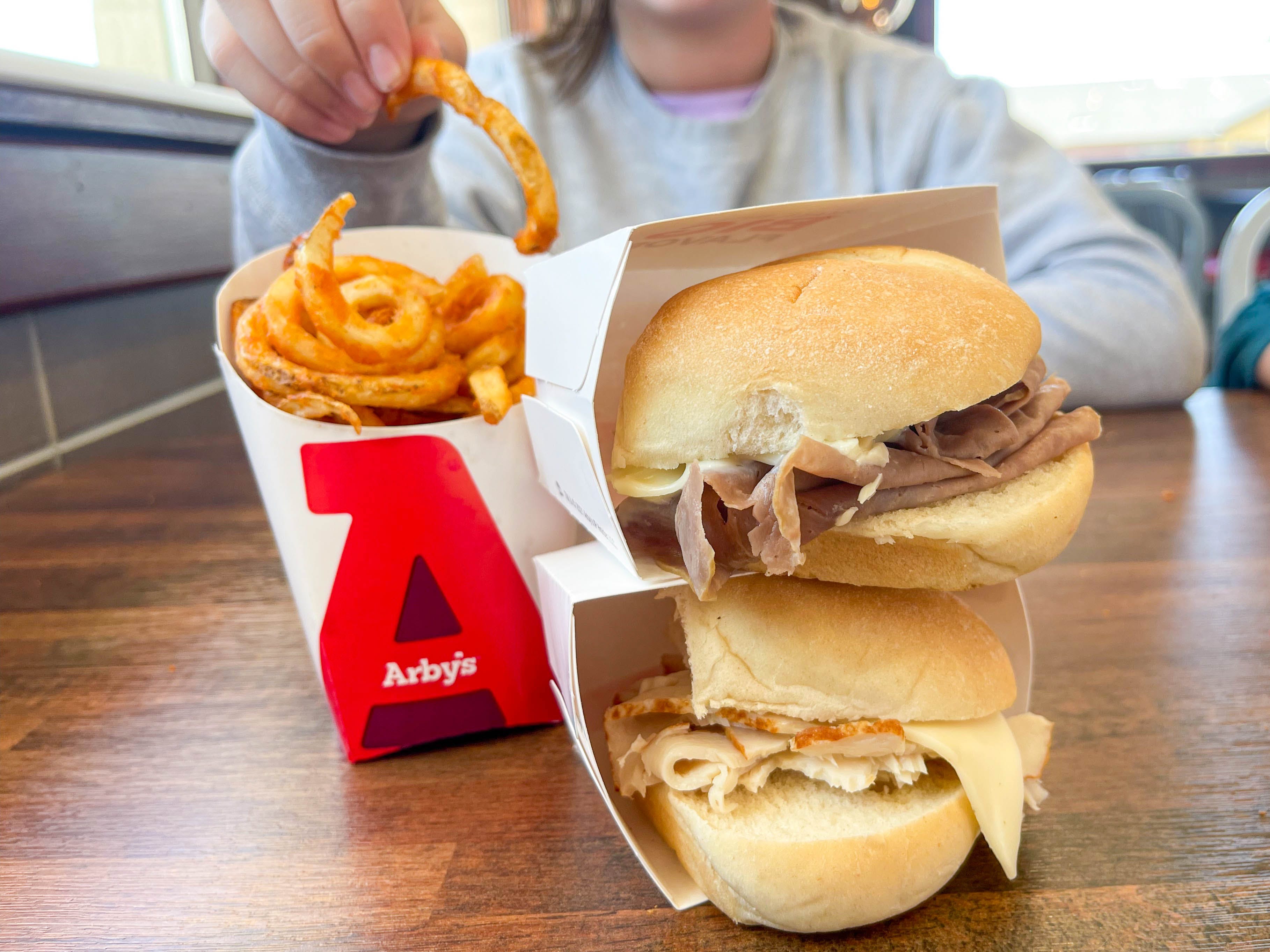 You can feed four people for $20 during Arby’s happy hour.

8. Get 2.2 oz more of meat when you order five Roast Beef sliders during Happy Hour instead of one regular Double Roast Beef sandwich. 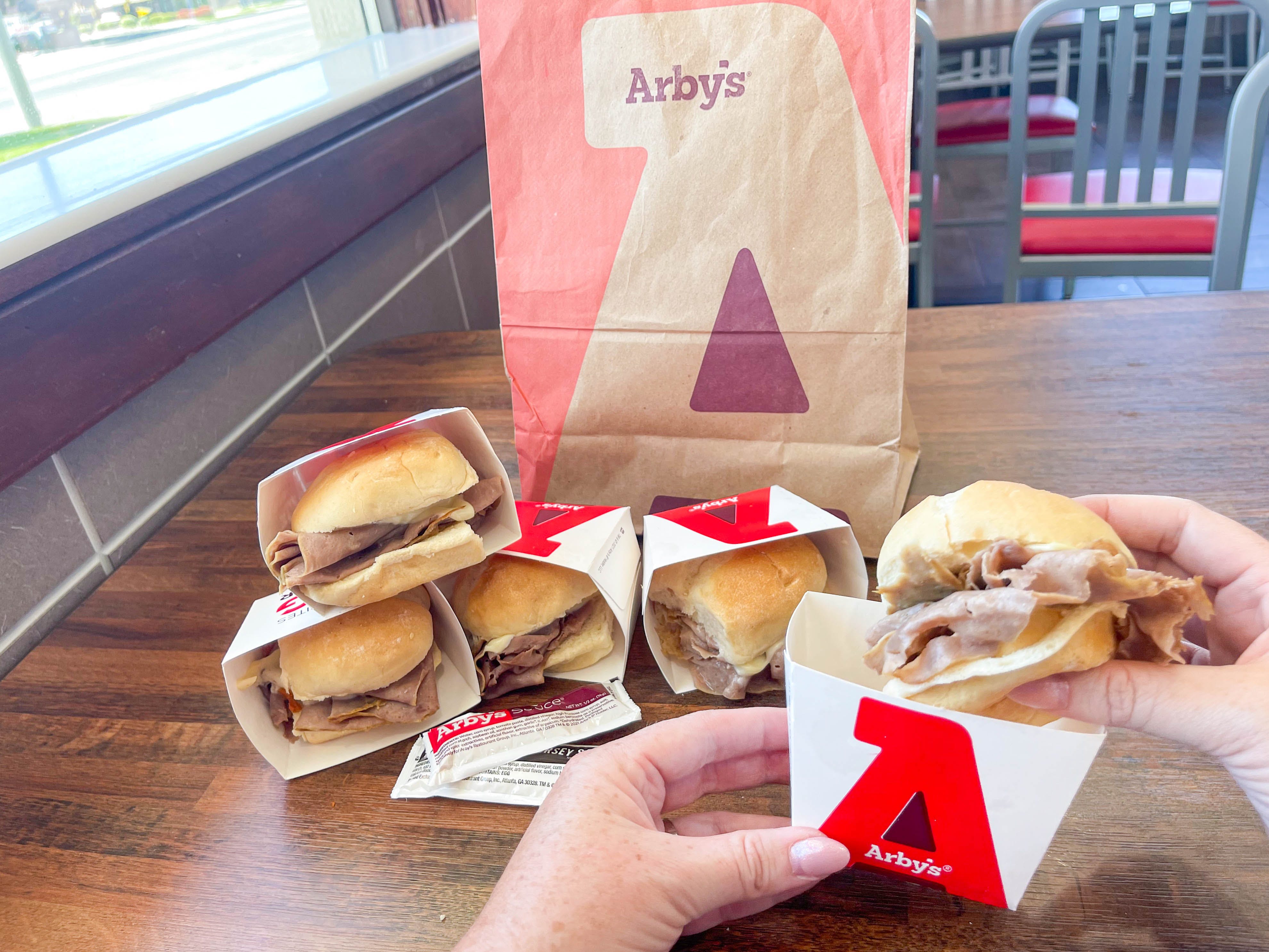 The Double Roast Beef sandwich costs $6.39 and is filled with 5.3 oz of meat. To get more for your money, order five Roast Beef sliders during Happy Hour when they’re just $1 apiece. 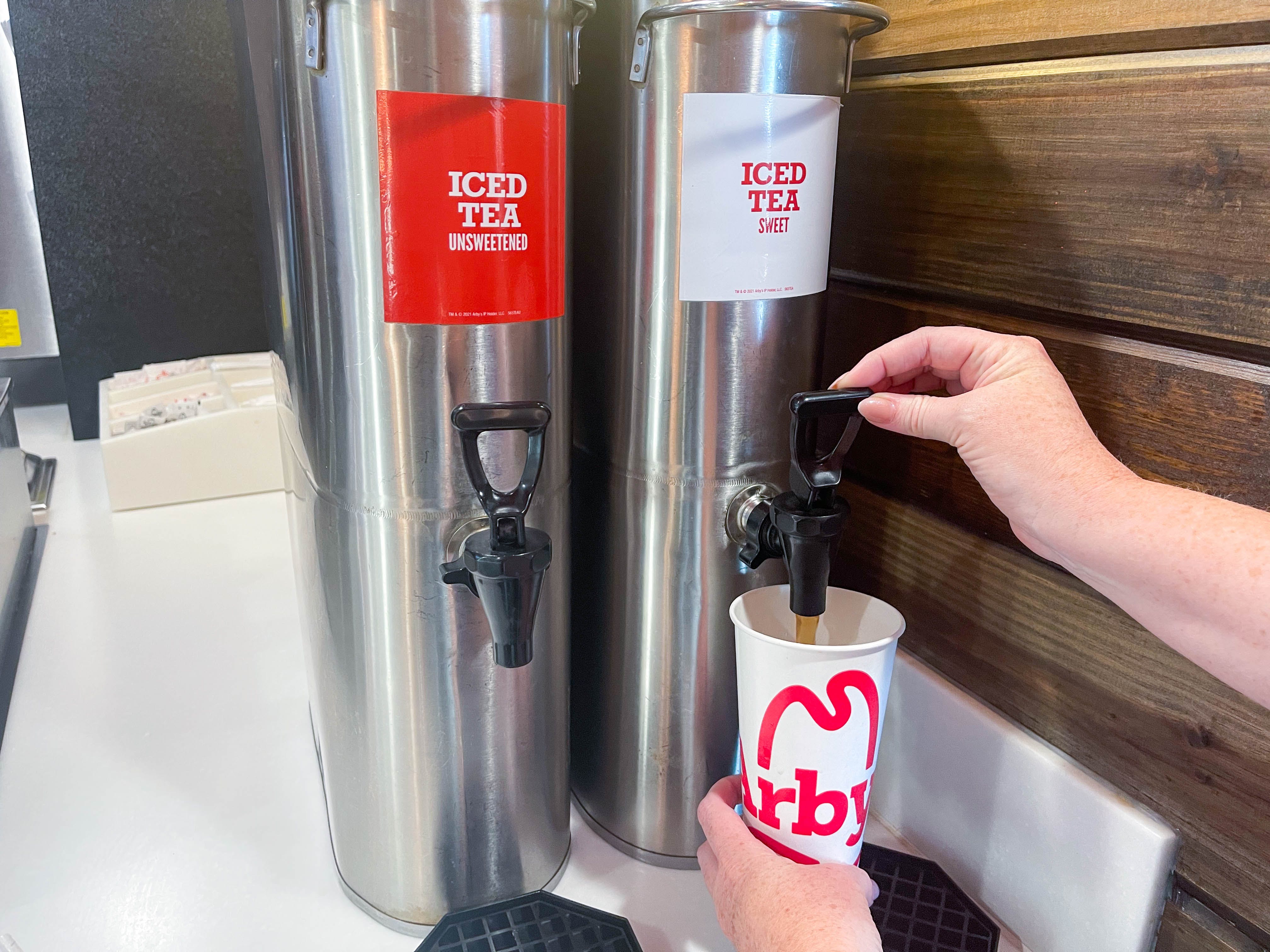 If you’re 55 and over, you can get 10% off your order at Arby’s with a senior discount.

If you’re a senior, you’ll either enjoy a free drink (varies in size depending on your location), 10% off your order, or both. Most Arby’s have some form of a senior discount, but not all of them do. But we have lots more senior discounts to tell you about if you’re interested.

TIP: You know who else gets 10% off at Arby’s? Military personnel and veterans (at select locations). Just present a military ID.

10. Get a free shake and small Arby’s curly fries on your birthday. 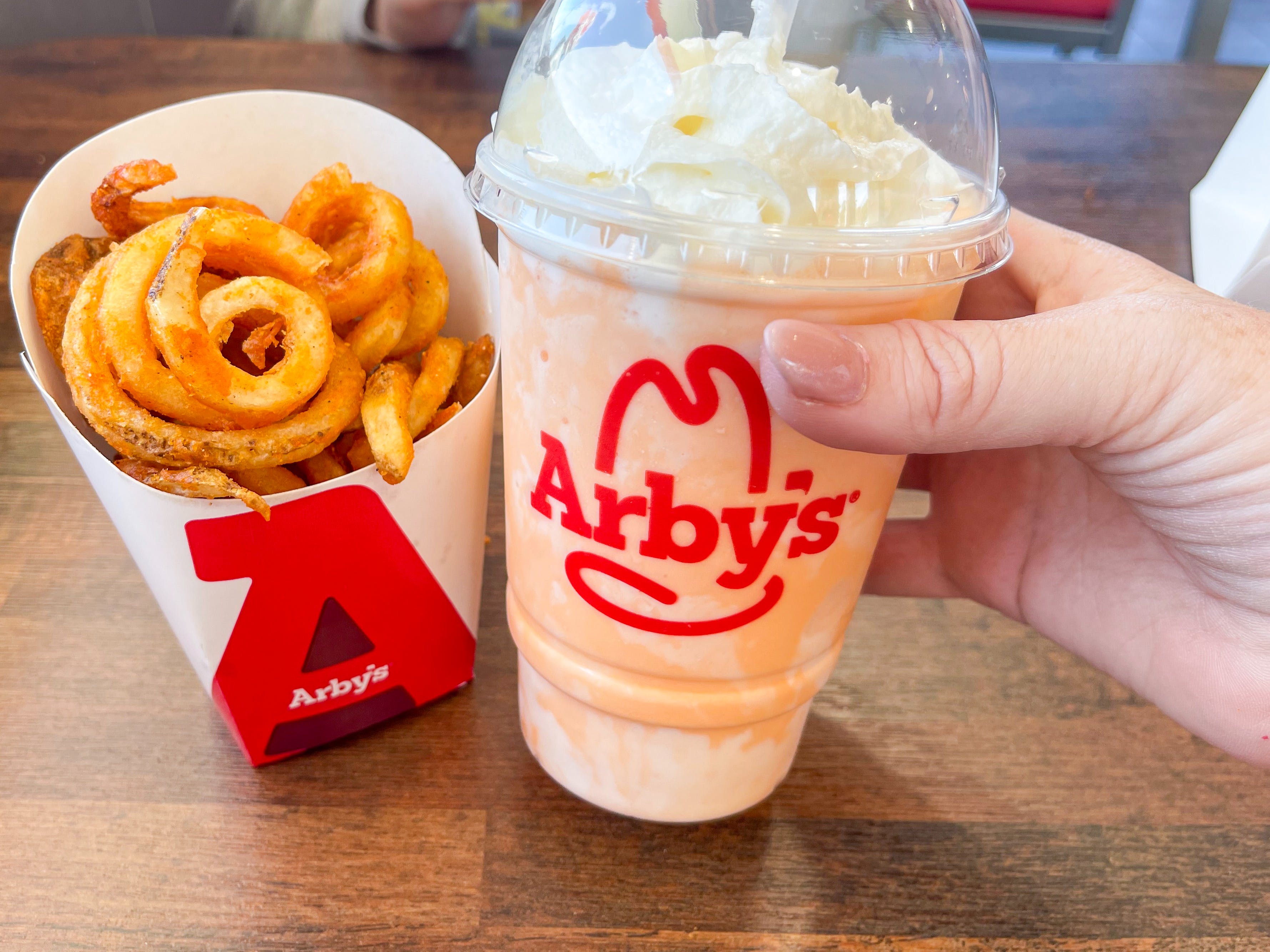 Sign up for Arby’s emails and create your account, and then a week before your birthday, you’ll get the coupon in your inbox, ready to be redeemed online or at the restaurant.

11. Does Arby’s have breakfast? Yes, depending on your location. 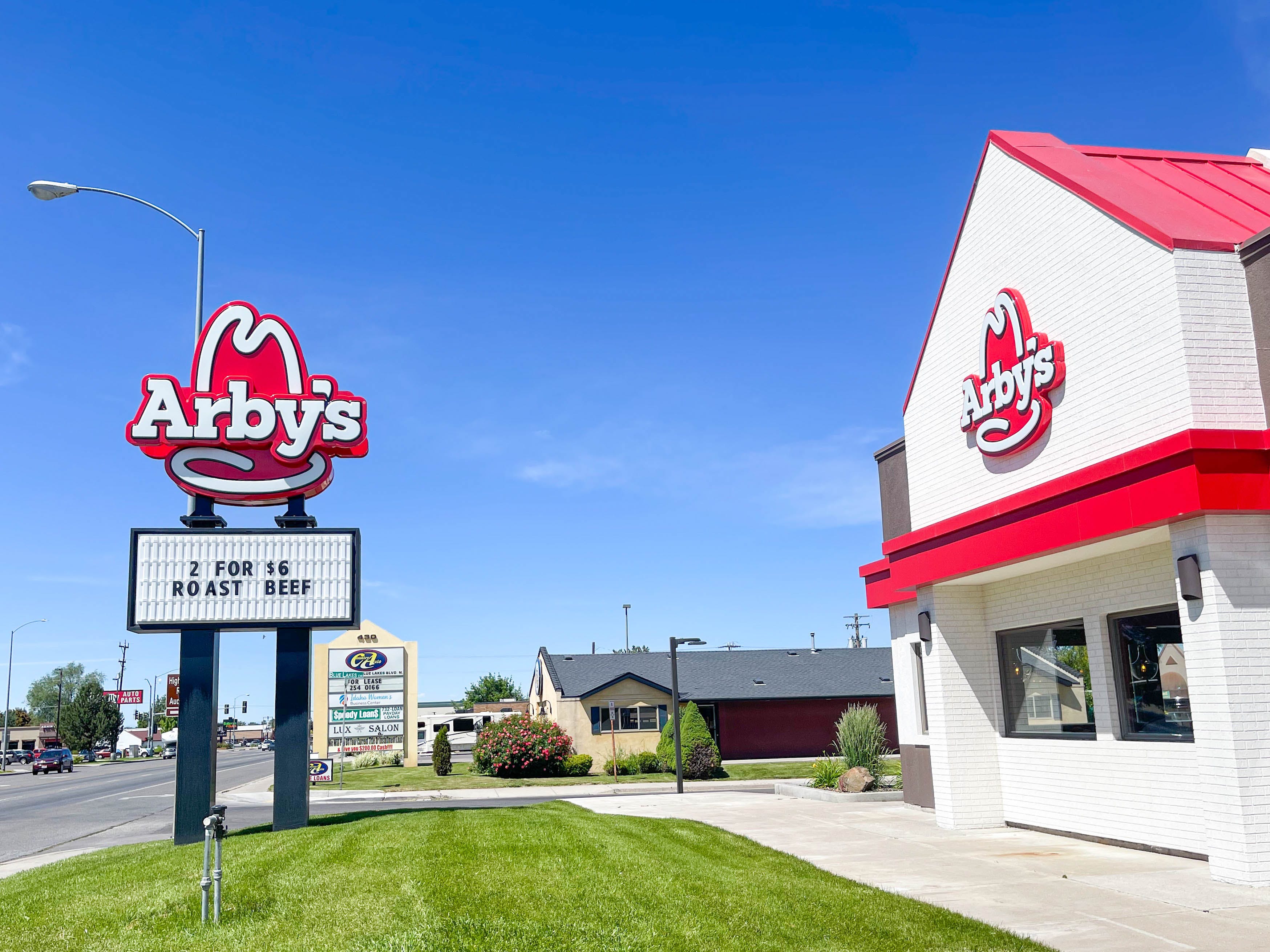 Arby’s breakfast does exist, but only around 200 of the 3,000 locations have it.

If your Arby’s serves breakfast, generally they’ll be serving it from 6 to 10:30 a.m. daily (although times vary by location). To find an Arby’s near you that serves breakfast, call up your nearest Arby’s and ask.

Now, if only there was an Arby’s Meat Mountain: Breakfast edition.

12. Save $0.15 per oz on Arby’s curly fries by grabbing the frozen bag at the grocery store. 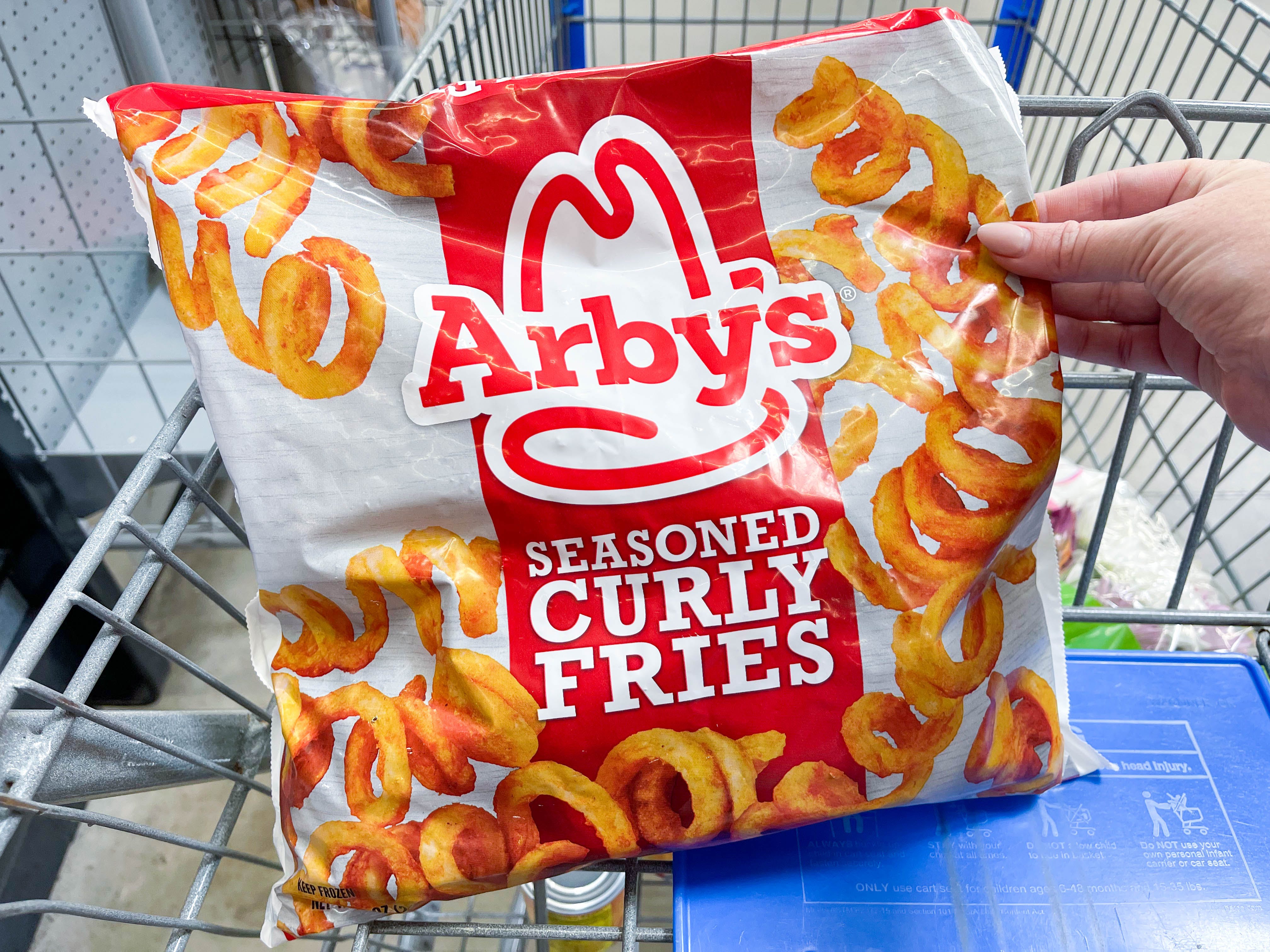 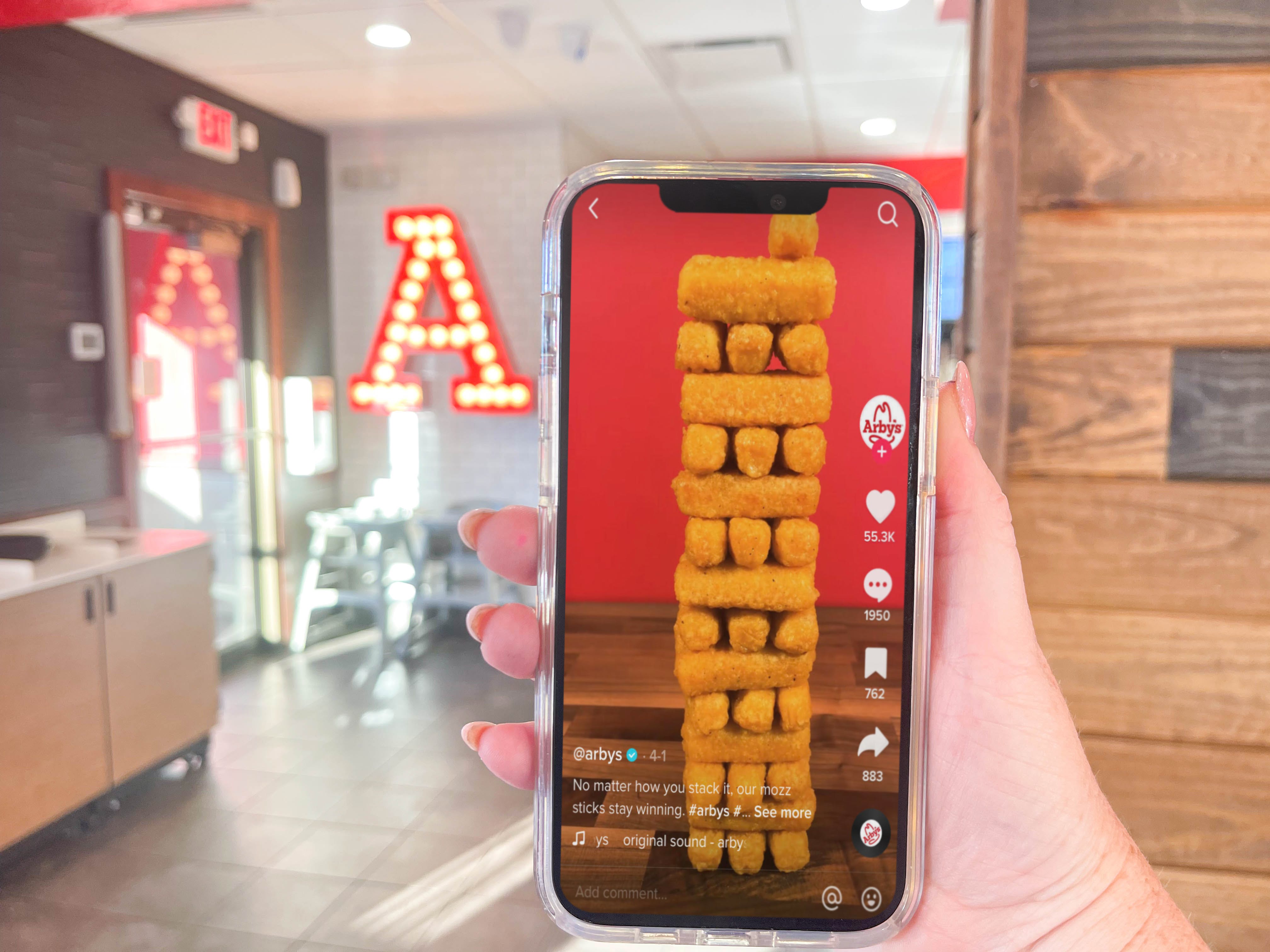 However, their Twitter is updated pretty regularly and has pretty sassy content to give you some laughs. 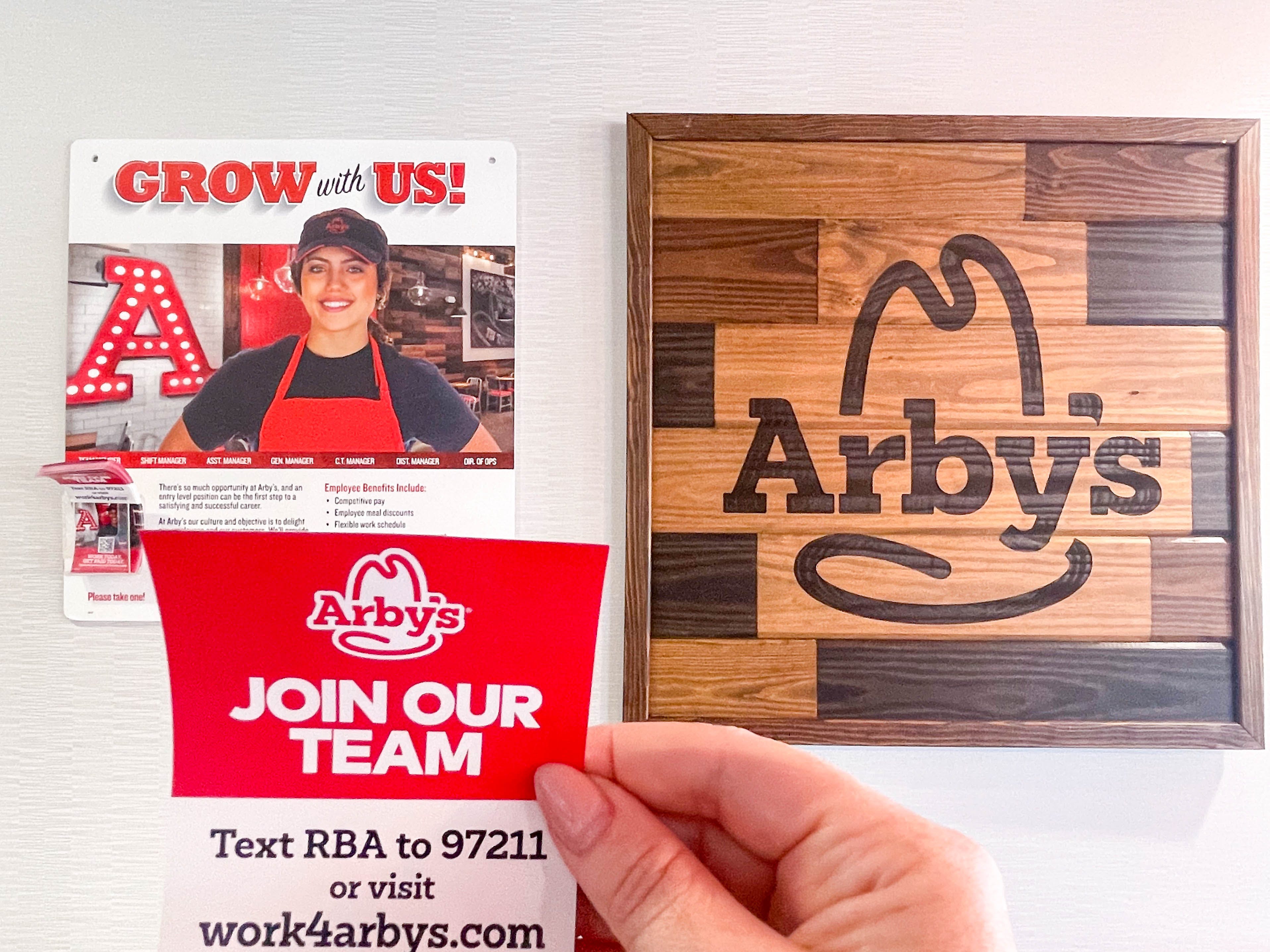 Arby’s employees get 50% off meals they purchase during their breaks or before or after work shifts. And yeah, that includes the Arby’s Meat Mountain (if your coworkers will make it for you).

Managers get an extra perk: one completely free meal per workday. 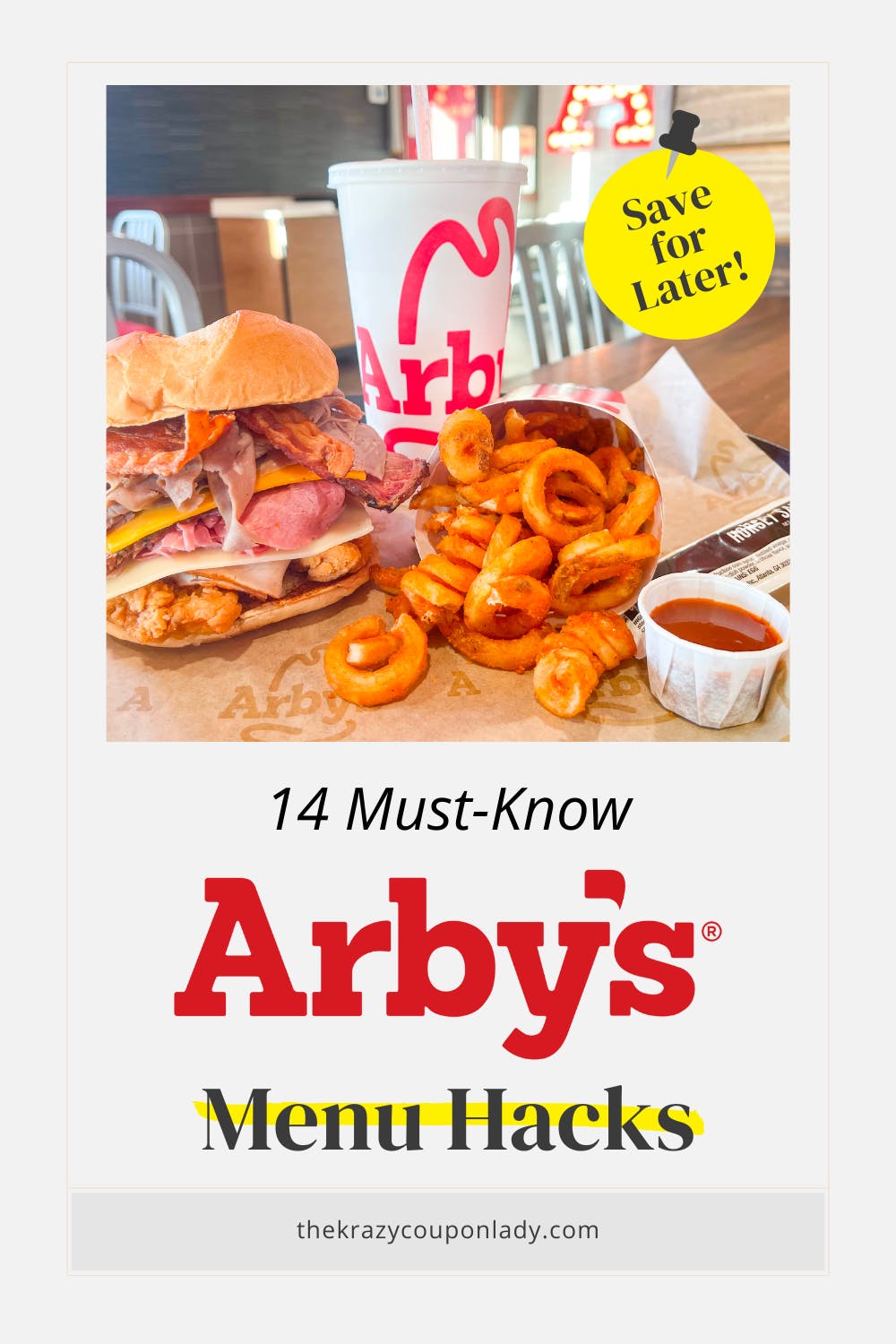 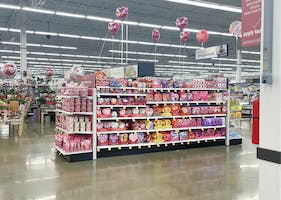 Extreme Couponing
an hour ago