The 25 Most Affordable Places to Live...

When did day-to-day living start costing so much money? It’s one of the scary realizations many of us have in adulthood: It’s expensive. If you look at the United States as a whole, the cost of living is higher in some areas than in others. If you’re looking to find a home where your dollar goes farther, you’ll be interested in the most affordable places to live in the U.S..

Generally speaking, what makes some places more expensive to live than others is all about population. More people means more demand for homes and less inventory, driving up property prices. It also means higher rents for businesses and, in turn, those businesses have to charge more for their products and services.

A more affordable locale likely has a smaller population, making it more budget-friendly. It could be a hidden gem or a place that has been able to maintain a tight-knit community and small town charm.

Keep reading to find out where better affordability exists in the U.S.. Then download the Krazy Coupon Lady app for more money-saving tips, deals, and coupons.

The 25 Most Affordable Places to Live in the United States

Thinking of moving to another neighborhood? These are the spots that won’t do as much damage to your wallet. And even better, they provide a lovely quality of life for their residents and community.

It’s important to note that it’s all relative when comparing what is considered more affordable. If you’re coming from a large, densely-populated city, all of the communities below are going to sound less expensive because you’re used to bonkers pricing. However, if you have lived in an area with better affordability, you may balk at the idea that these locales are considered among the cheapest places to live. 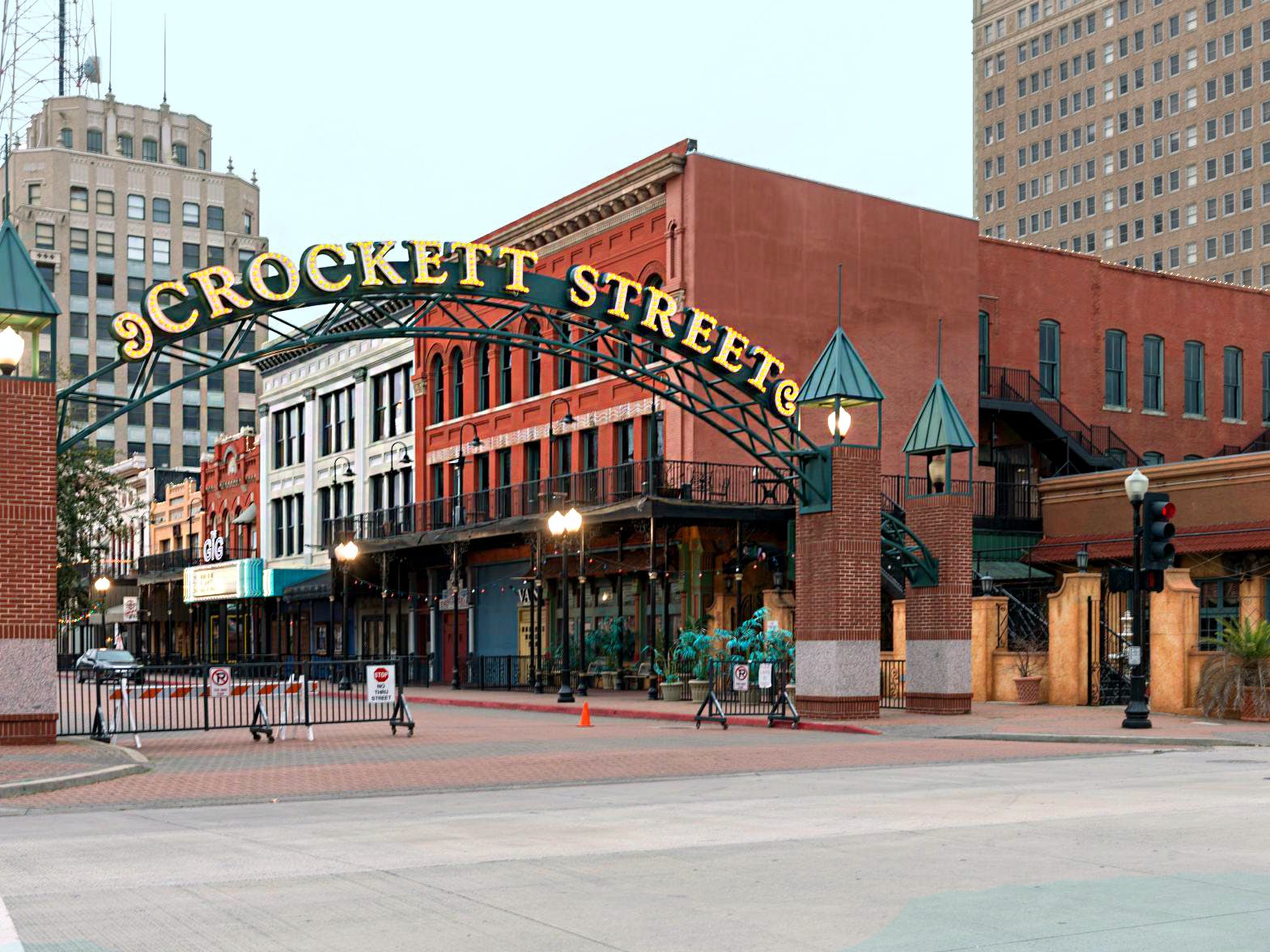 Beaumont is cheaper than the average cost of living in Texas and in the United States as a whole. In particular, housing is incredibly cheap, with a score of 46.3 out of an average of 100 for the whole country. Everyday expenses like transportation and groceries are also lower than the state and national averages.

Housing and transportation make the city of South Bend a safe bet for the budget-minded, contributing to an overall score of 75 (the national average is 100). Of note are their taxes: Property taxes are lower overall, and there is no social security tax. If you want to save money in your retirement years, this is a good place to do it.

When you think of the cheapest places to live, New York might not be top of mind—Buffalo is one exception. While the average cost of living in the state of New York is 121.5 out of 100, Buffalo is actually 88.5. You can expect to pay more than the national average for healthcare, utilities, and transportation but significantly less for housing. Overall, Buffalo is surprisingly budget-friendly. Plus, the job market is growing, opening up plenty of opportunities for people pounding the pavement.

Across the board, Tulsa is cheaper than the national average. Overall, the cost of living is about 14% cheaper, housing is 35% cheaper, and utilities and groceries are 3% and 5% cheaper, respectively. Total taxes are also substantially lower—$3,453 per person in OK versus $4,951 for the US. These statistics come from 2016 data provided by the U.S. Census Bureau.

Arkansas falls well below the national average in terms of affordability (77.5/100), and Fort Smith is even lower than that (75). Housing is incredibly cost-efficient, even though it’s the third-largest city in Arkansas. While the average sales tax rate is higher than the country, property taxes are some of the lowest in the nation. Enjoy the cheap gas prices, too.

Related: When will gas prices go down? We found some states may drop below $3. 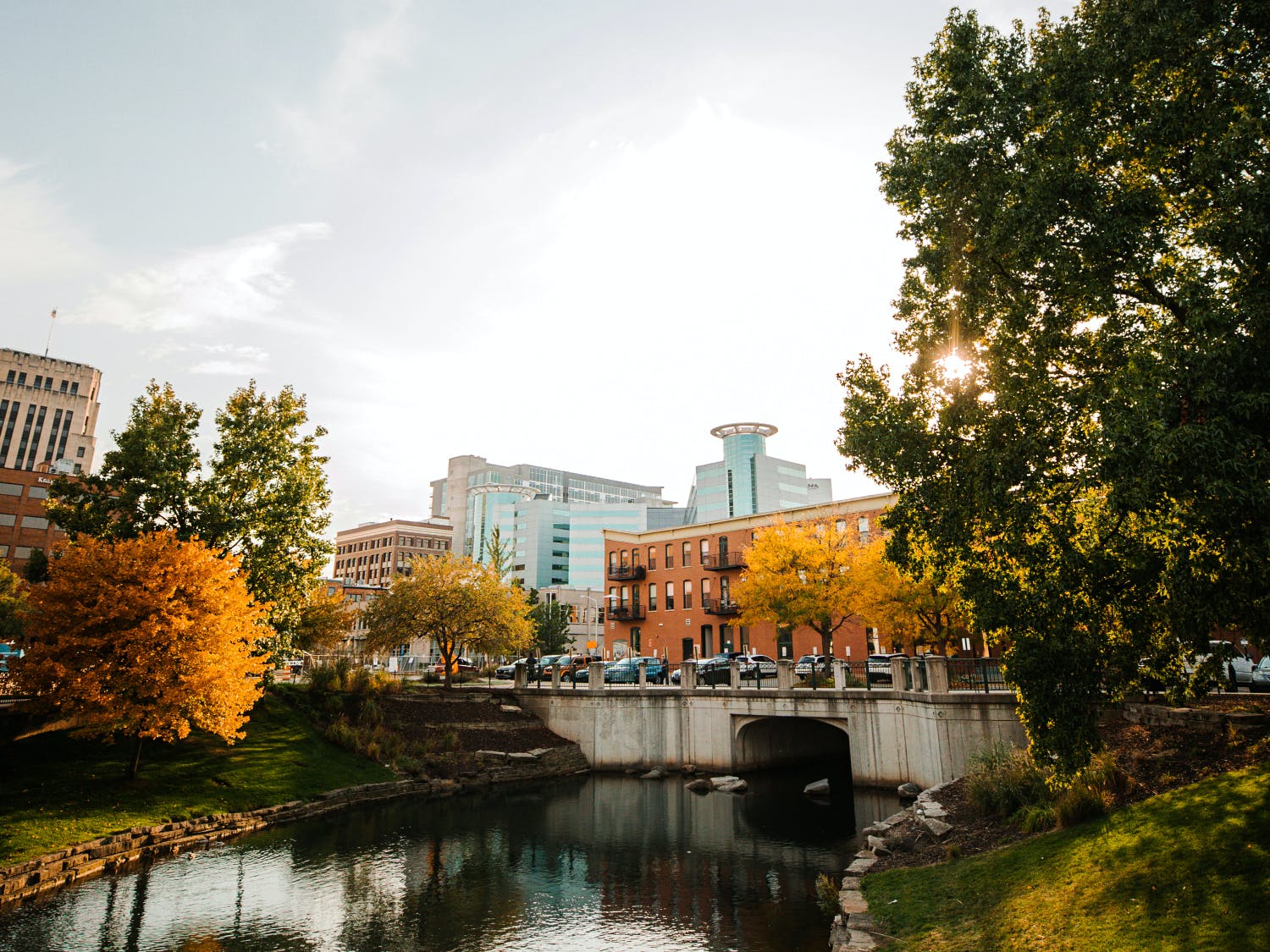 Here’s the deal, you will be paying more than average for utilities and miscellaneous expenses like clothing, restaurants, and entertainment. However, housing is so much cheaper—64.8/100—that it brings Kalamazoo’s overall affordability down to 83.9. Even though it’s less expensive, the city is still bustling with plenty to do (especially downtown). It’s also home to Western Michigan University, one of the bigger public universities in the state.

Land prices are low, as is the population, so they have plenty of room to keep building and welcoming newcomers to the city.

The cost of living in Huntsville is about 13% lower than the national average. This is largely thanks to highly affordable housing expenses, which are 32% lower. U.S. News also recently named it the best place to live. This means that Huntsville has great value, desirability, a strong job market, and offers a good quality of life.

As it is, Iowa falls well below the national average for cost of living sitting at 80.1/100. Thanks to even cheaper utilities and housing, Des Moines is a comfortable 78.7/100. It helps that throughout Iowa the population grows very slowly, meaning that the demand for housing is lower. There are plenty of job opportunities, too!

Cheap housing and transportation mean that the city of Columbus comes in at 76.4, relative to the national average of 100. Plus, it’s tax-friendly, especially for retirees, since social security income isn’t taxed. You’ll get to save on gas, too.

Thanks to housing that comes in at 42.4 out of 100, living in Memphis is cheap. You can also expect to pay a little less for groceries, utilities, and transportation. This is partly because it’s a very rural city. Also, the state doesn’t have any individual income taxes. Gas is super affordable, as well.

While healthcare and utilities are slightly higher than the national averages, groceries, housing, transportation, restaurants, and entertainment are all below it. This puts Kansas City at 87.9. Missouri has one of the lower unemployment rates in the country, too.

The Cornhusker State is known for more than its epic farmlands. It’s also one of the cheapest places to live, with Omaha coming in at 89.8/100. You’ll see nice dips in housing and transportation costs, along with utilities and groceries. It has some of the lowest unemployment rates in the country. Even though the cost of living is low, it’s a thriving metropolis that offers all the perks of a big city. In fact, U.S. News named it one of the best places to find a job. 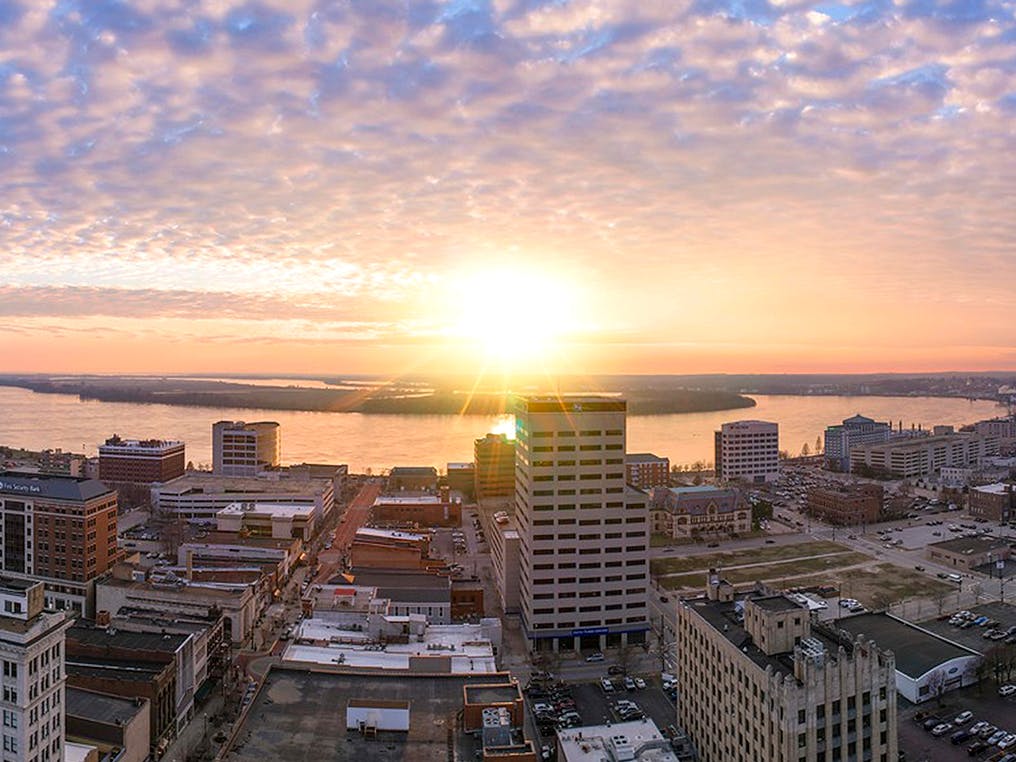 The Hoosier State may be famous for the Indianapolis 500, but it’s also a great place to live. Evansville is at 80.2 compared to the national average of 100 in terms of affordability, so it’s a lovely option with great livability. You’ll have an easier time finding affordable housing here and transportation is budget-friendly, too.

Budgeters, brace yourselves. We’ve got Clarksdale clocking in at 68.1/100. Gas prices are low in Mississippi, too. Housing is so much more affordable than elsewhere in the country, as are “extras” like meals and entertainment. It’s also cheaper to purchase real estate for your business. And, your retirement money will last a lot longer, since the state doesn’t charge taxes on retirement income. Bonus points for public college tuition—it’s some of the most affordable in the country.

Pack your bags, friend, because Akron scores 68.9/100 and will go easier on your monthly expenses. This will be especially noticeable if you’re moving from a place where cost of living is exorbitant. The city’s housing is some of the most affordable you’ll find in the state, plus, food, and healthcare are cheaper. You’ll save your hard earned money on utilities and, especially, transportation.

Low-cost housing, transportation, meals, and entertainment leave Spartanburg at 81.2. It has desirable wages and job growth, plus a low unemployment rate. The scenery is gorgeous, and there’s plenty to do, making it a great place to retire. And they don’t tax social security retirement benefits.

While Oklahoma City is pretty on par with the national averages, it’s less expensive housing (56.6) helps to lower the overall cost of living (84.4). It doesn’t hurt that the land is flat and super developable. All of this makes it one of the cheapest places to live.

While hotspot Chicago is quite pricey, Peoria scores 73.9 in relation to the national average of 100. And, when you are in the mood for the city’s hustle and bustle, Chi-town is only two-and-a-half hours away. Housing is a homeowner’s dream (33.3), and you’ll also save some cash on transportation and groceries, which also cost less than the national average.

Healthcare is higher in general in North Carolina, and especially in Hickory. However, it’s balanced out by everything else—housing, groceries, transportation, utilities, entertainment, and dining. Overall, Hickory is comfortably below the national average (88.2). U.S. News even named it the most affordable place to live in the nation. 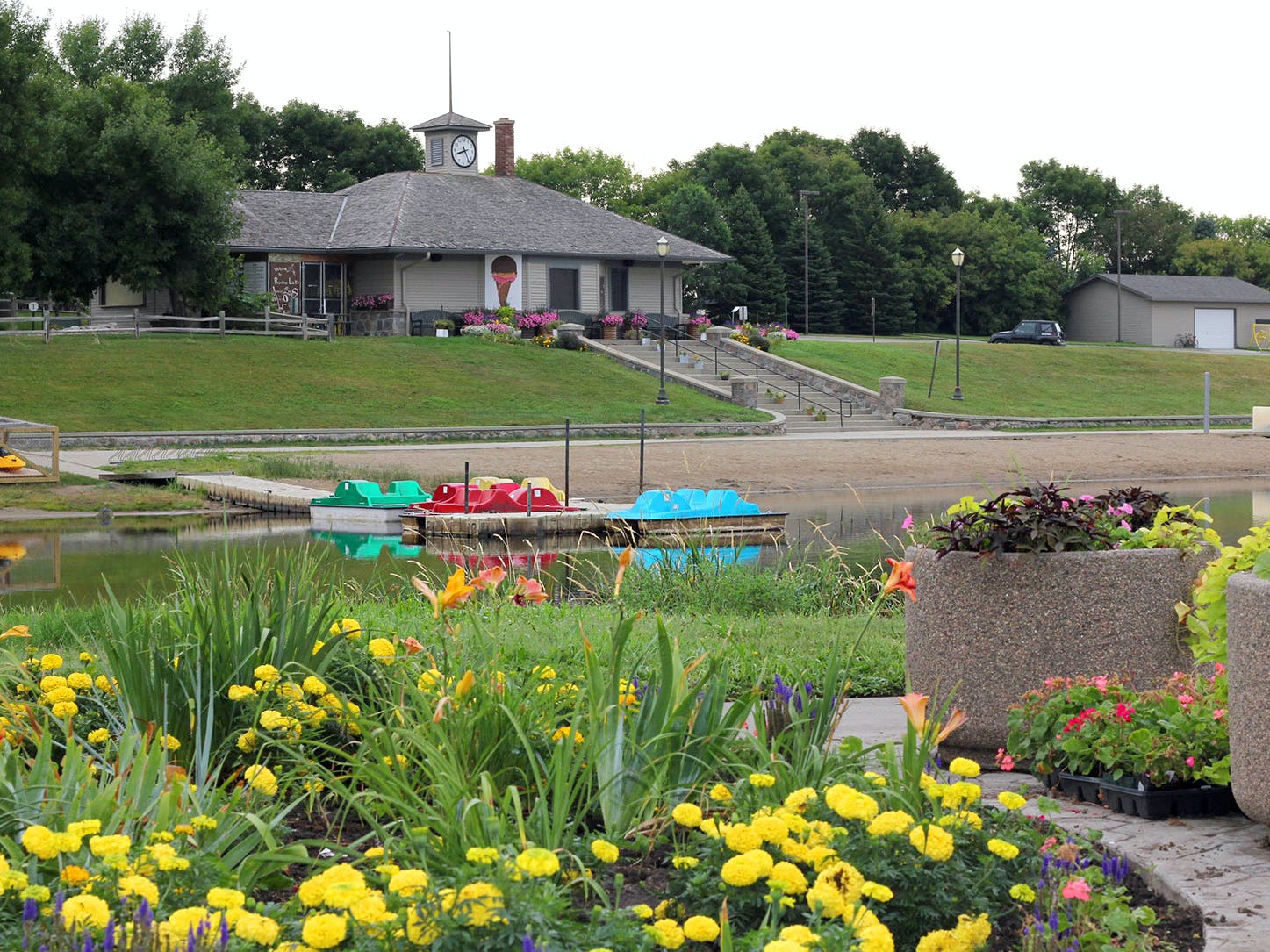 Penny pinchers, rejoice. Huron, SD might be one of the cheapest places to live, scoring 72/100. Plan to shell out more than the national average for healthcare, but for everything else, your wallet will be thrilled. Housing is especially affordable, scoring just 36.3. As a bonus, South Dakota has some of the best gas prices in the country and the unemployment rate is low.

Housing and utilities come at a real discount in Lafayette, contributing to the city’s overall score of 88. In a time when gas prices are soaring, Louisiana is managing to keep those costs down. Plus, the state has some of the lowest property tax rates in the nation.

If you’re a Packers fan, you’ll be thrilled to find out how affordable Green Bay is: 80.3/100. The housing market is red hot for buyers, and transportation is also noticeably cheap. Plus, it’s the “flagship city and economic hub of northeastern Wisconsin,” meaning that opportunities for career growth and recreation are steadily growing.

If you want to enjoy one of the original 13 colonies but you’re on a budget, head to Scranton. This city sitting at 79 out of the national average of 100. Housing is well below the national average (at 41.7), and you can also get transportation for a bargain. It certainly helps that it’s much cheaper than other nearby metropolitan areas, like Philadelphia and New York City. And, of course, if you’re a fan of The Office you’ll know Scranton as the home of the show’s Dunder-Mifflin branch.

If you want to save money, head to Dayton. Ohio where you can live comfortaly and affordably. Dayton scores 71.1, mostly thanks to inexpensive housing (21!). Ohio is typically an affordable place to live because only Cleveland sits against a lake, and it’s not mountainous. So, they can keep building in all directions.

Everything is bigger in Texas, except for the cost of living. With a score of 75.7, food, housing, transportation, entertainment, and dining are all below the national average. Texas has some of the cheapest gas in the US, too, and no personal income tax. 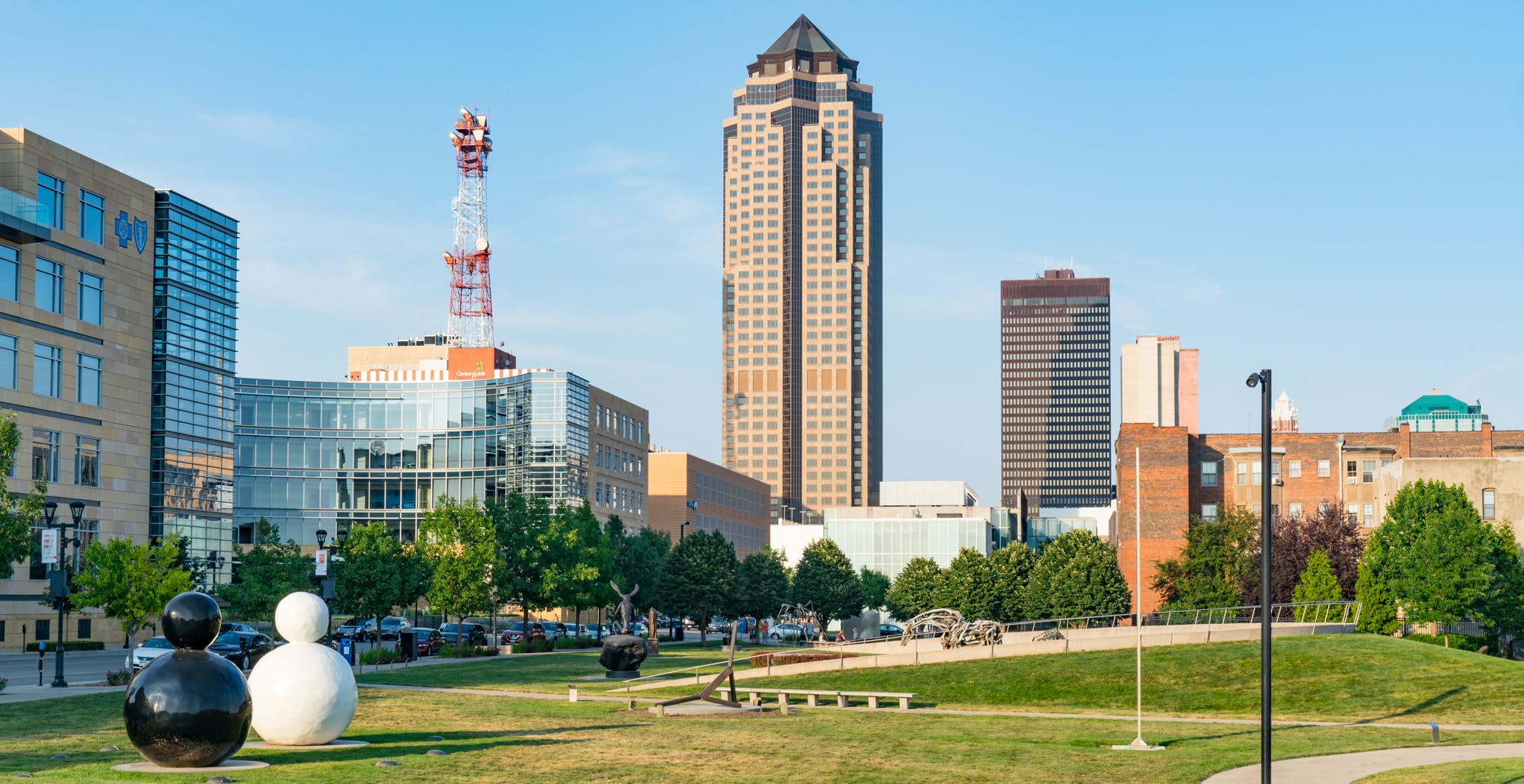 up next
How to Spend Less Money in Every Area of Your Budget With Our 100 Tips
Related articles
We're Getting a Big Social Security Increase in 2023
50 Frugal Living Tips if You're Looking to Cut Back on Spending
How to Live Rich on One Income
Is Everything More Expensive? (These 21+ Things Definitely Are.)
Why Are Gas Prices Going Up Again? Here's the Reason ...