Going Solo on a Cruise? Tips to Avoid...

This article contains tips that may no longer be active. Check out the following links for more up-to-date tips on how to save money during your upcoming vacation! 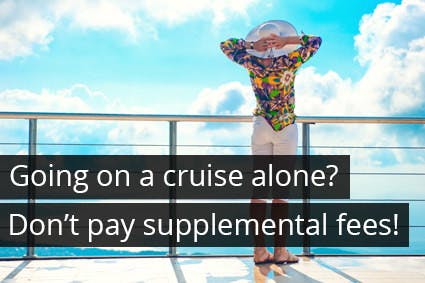 Per-person, double occupancy and single supplement: two phrases that elicit a collective shudder among solo cruisers everywhere because cruise-cabin pricing is based on two people sharing a room. If a cruise line wants to get $1198 for a particular cabin, they’ll advertise a rate of $599 per-person, double occupancy and the two guests who book that cabin will each be charged $599 for a total of $1198. When the same cabin is booked by a lone guest, the cruise line still wants $1198 for it and will charge the guest the $599 cabin rate plus a $599 single supplement to get it.

Cruise cabins are sold at loss-leader rates to get customers onto the ships and—hopefully—spend even more money on things like alcoholic beverages, spa treatments, shore excursions and gambling. Even with imposing a supplement on the solo passenger, an empty cabin bed equals lost revenue in the eyes of cruise lines. Had they been able to charge a second guest for the privilege of sleeping in that bed, that guest would likely have done so after a long day of buying drinks, spa treatments, shopping or gambling.

Who are solo cruisers?

You might be asking why on earth someone would want to go on a cruise by themselves or perhaps the term “solo cruisers” conjures up images of young singles on the prowl. There are, in fact, many reasons why a passenger might be sailing alone or solo in a cabin. Sometimes passengers who never imagined that they’d ever sail alone have unwittingly joined the ranks of solo cruisers. A solo cruiser may be:

Holland America Line’s Single Partners Program arranges for a solo guest to share a cabin with another solo cruiser of the same gender. If a roommate isn’t available, the guest will occupy the cabin alone without incurring a supplement.

Cruise lines will sometimes offer specials for solo cruisers on certain sailings to stimulate bookings. Vacations To Go is a Texas-based, online travel agency that features up-to-date listings of low or no single supplement cruises available worldwide. Registration is required in order to view the specials—however, only your name, email address and country of residence are asked for. Currently, many no-supplement cruises departing from Florida, Texas, Louisiana and California are available through mid-May.

Other ways to reduce costs

If you can’t find a zero- or low-supplement sailing, you may be able to reduce the impact of the supplement on your fare by booking a year or more in advance, booking last minute or off-season, or looking for discounted rates that you may qualify for such as:

For similar articles, check out:

Are You Missing Out on Cruise Fare Price Reductions?

Are You Missing Out on Free Spending Money? Find Out Before Your Next Cruise!