Do I Need a Membership for Sam's Club...

Warehouse memberships can feel like a commitment, so if you’re wondering if you need a membership to shop at Sam’s Club, it’s a legitimate question.

After all, you’ve probably heard that you can shop at Costco using just a Costco gift card. So, what’s up with Sam’s? I’ve got these answers and more regarding some differences between Costco and Sam’s Club.

Do you need a membership to shop at Sam’s Club? 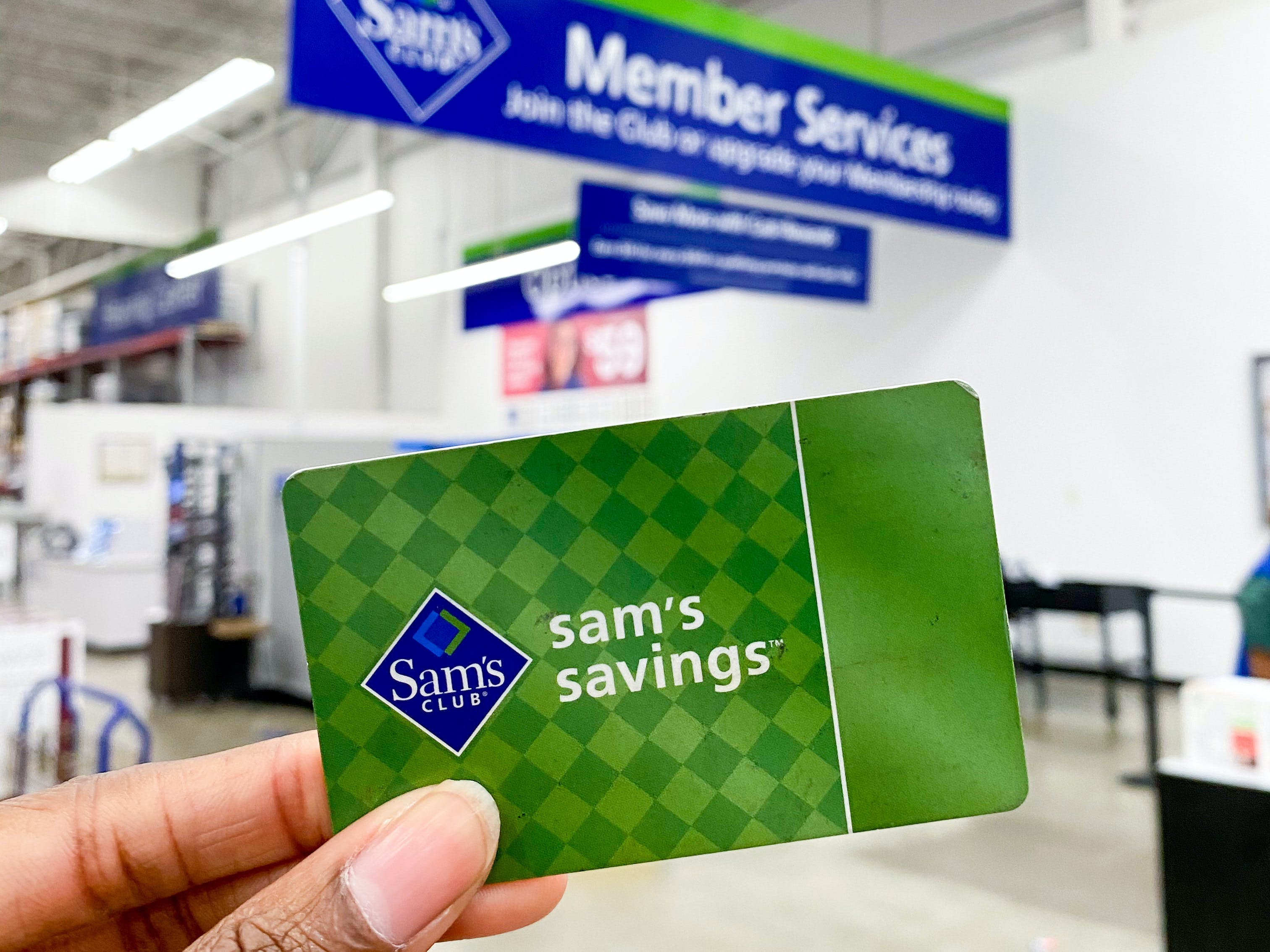 Yes and no. Yes if you want to go into the warehouse club and do your shopping. No if you want to shop at SamsClub.com. But this is important! If you decide to shop online, you’ll pay a 10% markup on everything you buy. So, I only recommend this approach if you very rarely shop at Sam’s Club or if you know you’ll only do it once or twice. Otherwise, become a member so you don’t have to pay that markup!

Is there anything I can do at Sam’s Club without a membership?

Yes. You can buy alcohol in certain states (depending on whether your state requires a store to sell alcohol to non-members). You can also fill prescriptions, get an eye exam, and eat at the food court. But note that as a non-member you can’t buy optical products. You can only get the exam.

Can I get a Sam’s Club one-day pass? Guest pass? 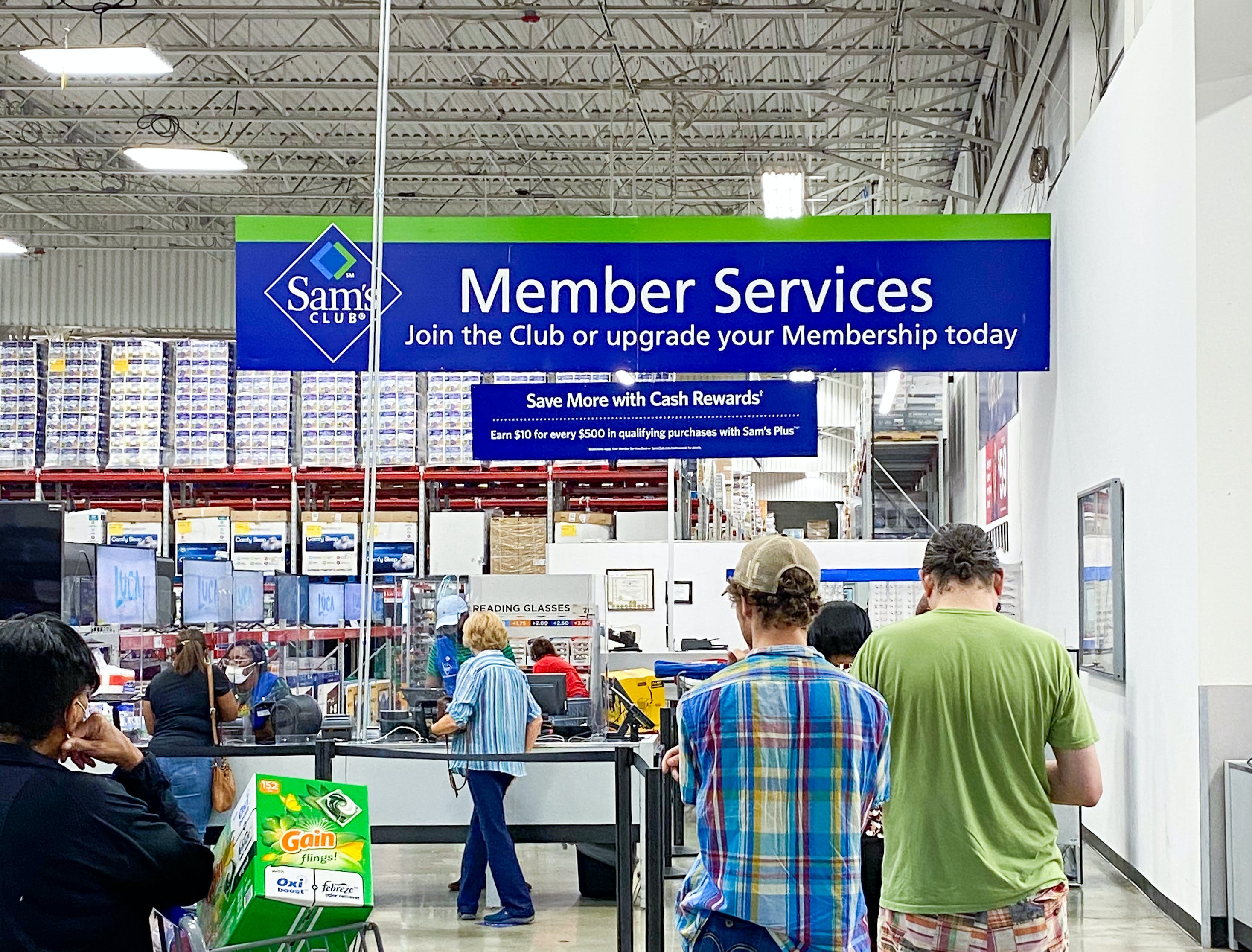 No. Not in the traditional sense where you can shop in the club with a day pass. Those are long gone, as Sam’s Club no longer offers guest memberships.

Instead, try a Sam’s Club free 90-day trial membership to test the waters.

Sam’s Club offers a test run for 90 days as a basic Club member. With this, you’ll have access to everything a Club member gets. Your trial membership is set up to auto-renew, signing you up as a full member at the end of 90 days. Don’t worry! You can cancel it anytime before the 90 days is up if you don’t want to join. 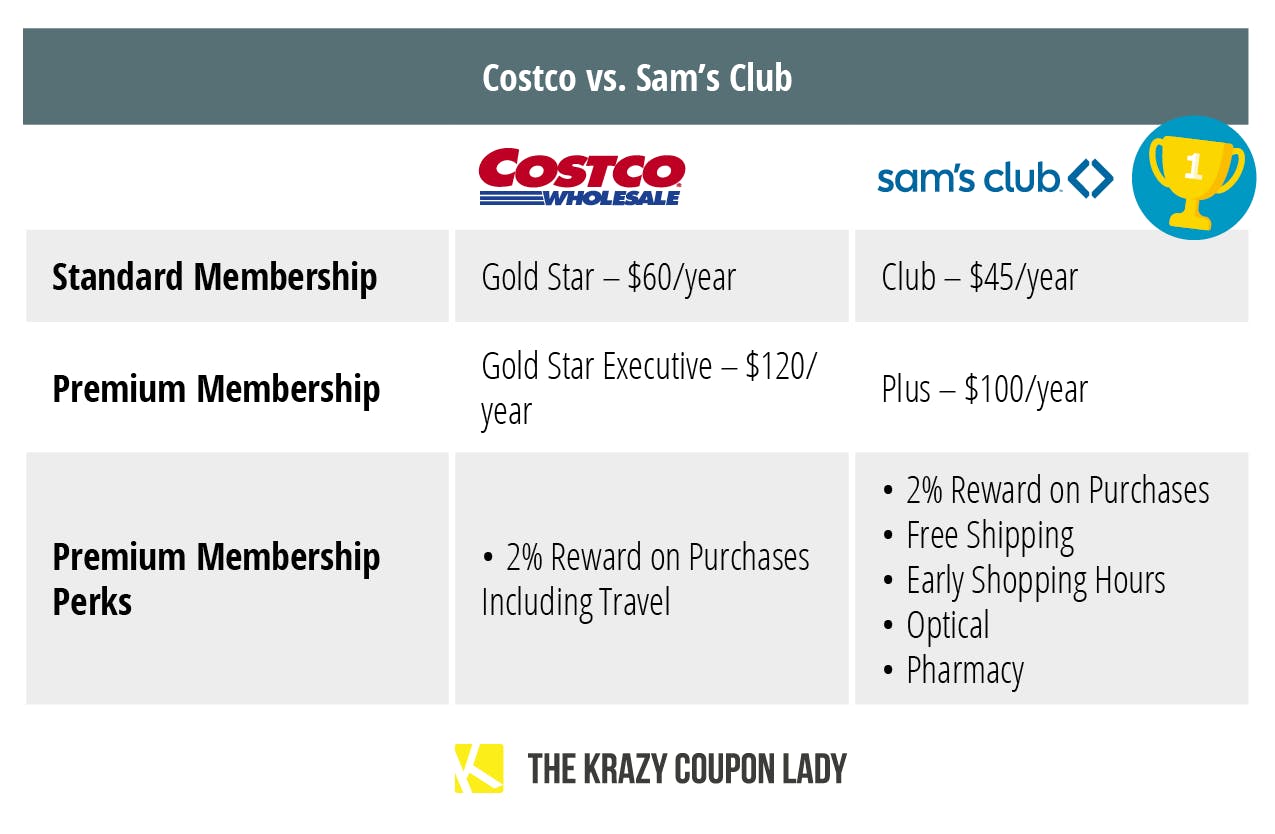 Overall, a Sam’s Club membership is 16 – 25% less than a Costco membership, with the steepest savings (25% difference) being between the two least expensive options (Gold Star at Costco and Club at Sam’s Club).

Sam’s Club’s membership starts at $45 per year (Club) and can go as high as $100 per year (Plus). Plus members get free shipping, optical, pharmacy, and early shopping hours in the warehouse.

But wait to join Sam’s Club until there’s a free membership deal.

Sam’s extends opportunities to get a $45 membership gift card regularly throughout the year. When you can land one of these, you’re essentially getting a free year of membership. Worth waiting for! Here’s what I normally see:

Which warehouse is bigger? Costco or Sam’s Club? 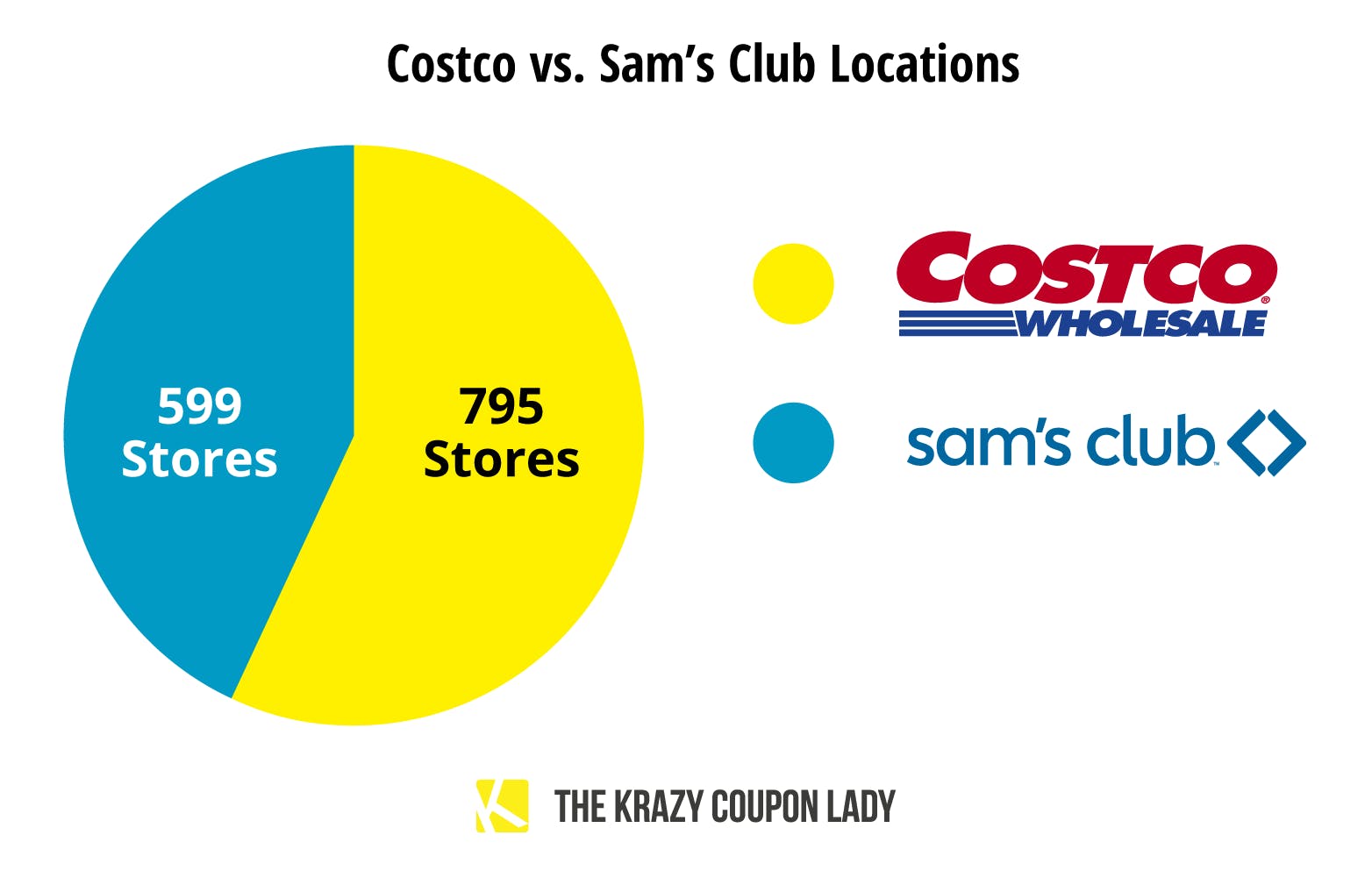 Even though Walmart owns Sam’s Club, and Walmart is huge (almost 5,000 stores!) Costco is still bigger than Sam’s. And Costco is bigger all around. By square footage — warehouses are larger on average than a Sam’s Club warehouse. Not only that, but Costco has more stores in general.

Costco comes in with 795 stores total with 552 in the U.S. (International stores include Mexico, Canada, Japan, and more.)

Sam’s Club has 599 stores, mostly in the U.S., with stores in Brazil, China, and Mexico.

Also, Costco is growing, having consistently added 16 – 25 stores per year over the past three years to Sam’s Club’s closing of about 10% of their warehouses in recent years.

A Sam’s Club shopping trip will go faster than shopping at Costco.

Sam’s Club offers Scan & Go, so you can scan your items as you put them in your cart, pay in the app, and walk out, avoiding lines completely.

Costco offers self-checkout at most warehouses now, which is an improvement. But it’s not as effortless as Scan & Go.

So there you have it! All your burning Sam’s Club questions answered. Did I miss any? Let me know in the comments. 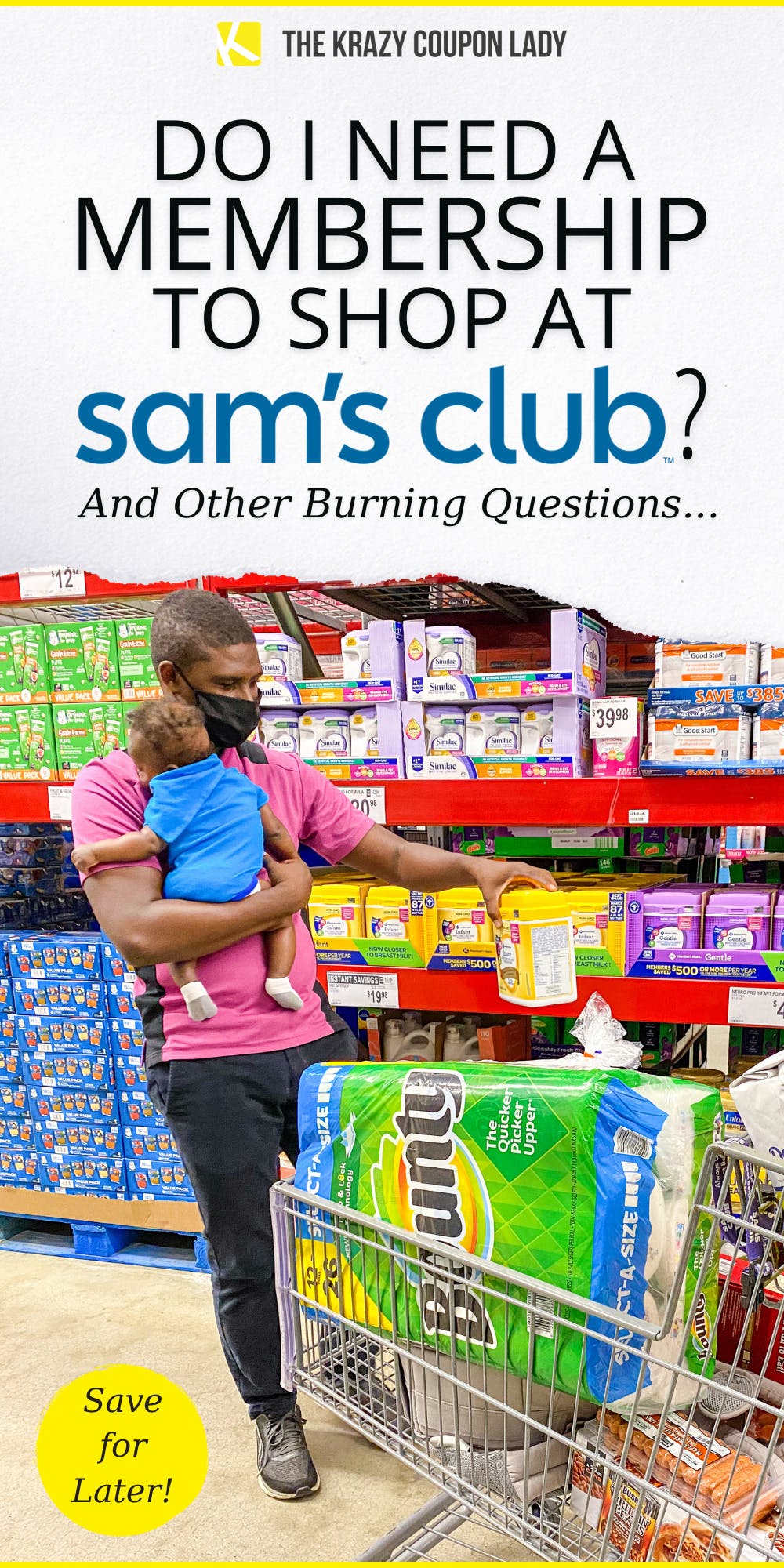 up next
32 Tips Every Sam's Club Shopper Needs to Know
Related articles
Can You Shop at Costco Without a Membership? 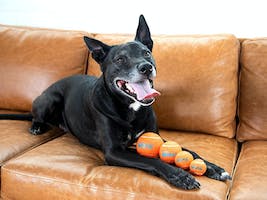 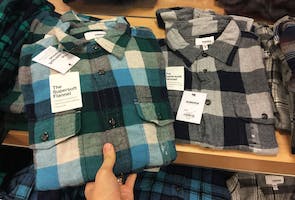 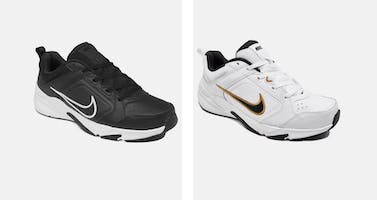 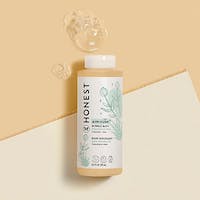 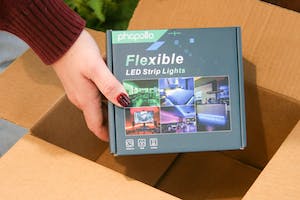 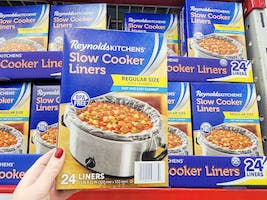 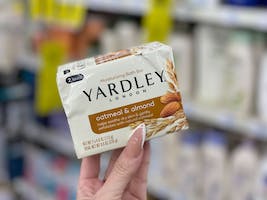 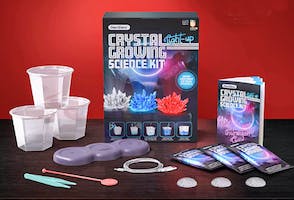 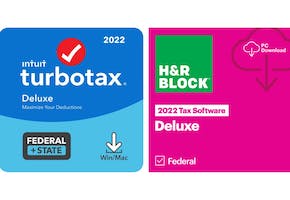 Online Deals
an hour ago
CA Residents only: Do not sell my personal information.
© 2009 - 2023, Krazy Coupon Lady LLC. Privacy Policy