Do YETI coolers ever go on sale? How do I avoid paying the big bucks for a cup or cooler to keep my beer and lunch meat cold for a week?! It’s no secret, anything with the name YETI on it is expensive. Sure, YETI devotees swear the money is well spent…but still. For the rest of us, here are a few tips that will help you spot a YETI. . . sale.

1. Set a deal alert in the KCL app for the latest YETI sales. 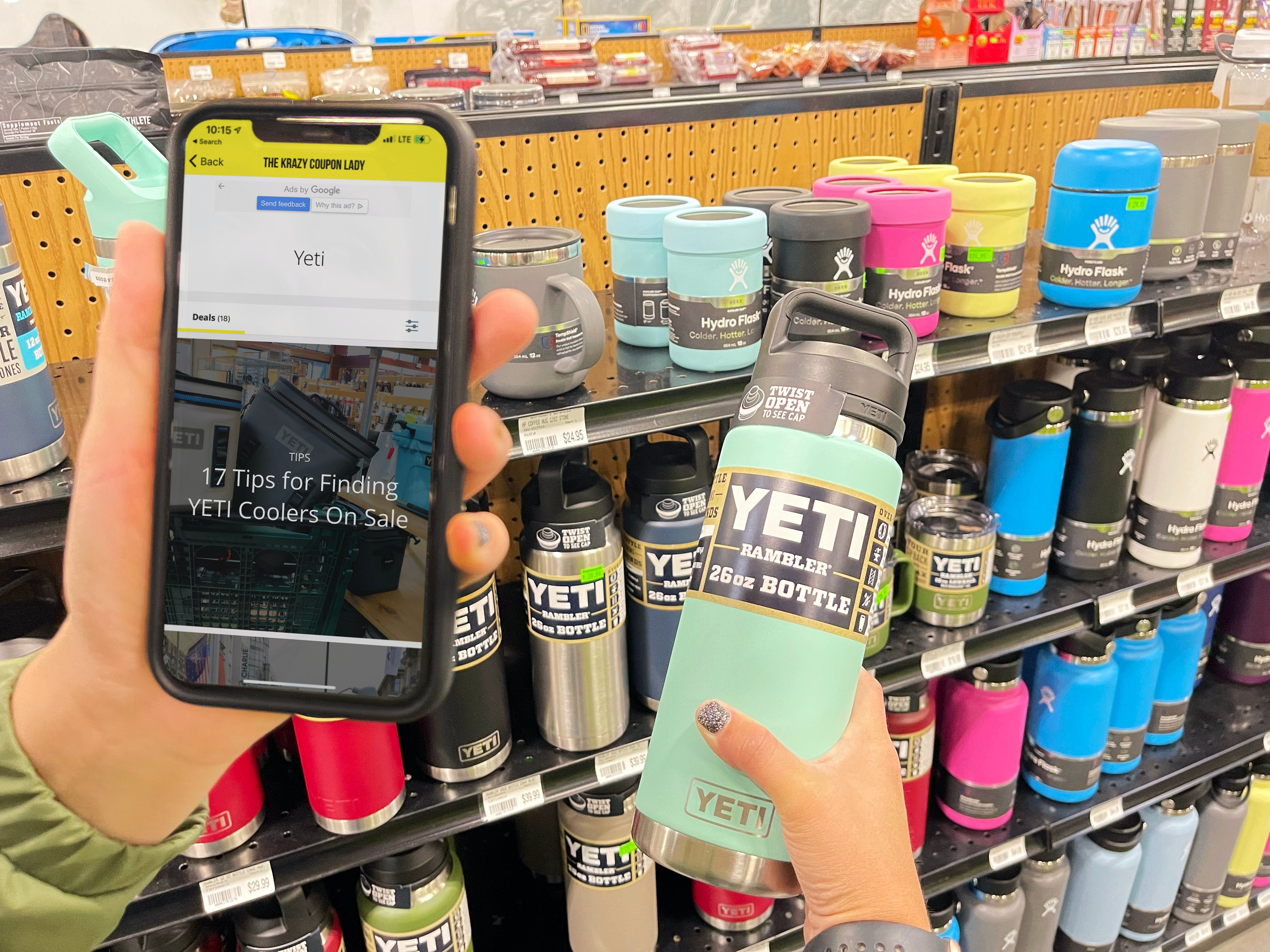 Next, tap the gear icon on the upper right side of the screen and turn on notifications for YETI.

This way, I can notify you the minute I see a YETI cooler on sale, especially crucial as Black Friday and holiday shopping approaches.

For example, in 2020 Dick’s Sporting Goods offered 20% off YETI for five days during the second week in December. 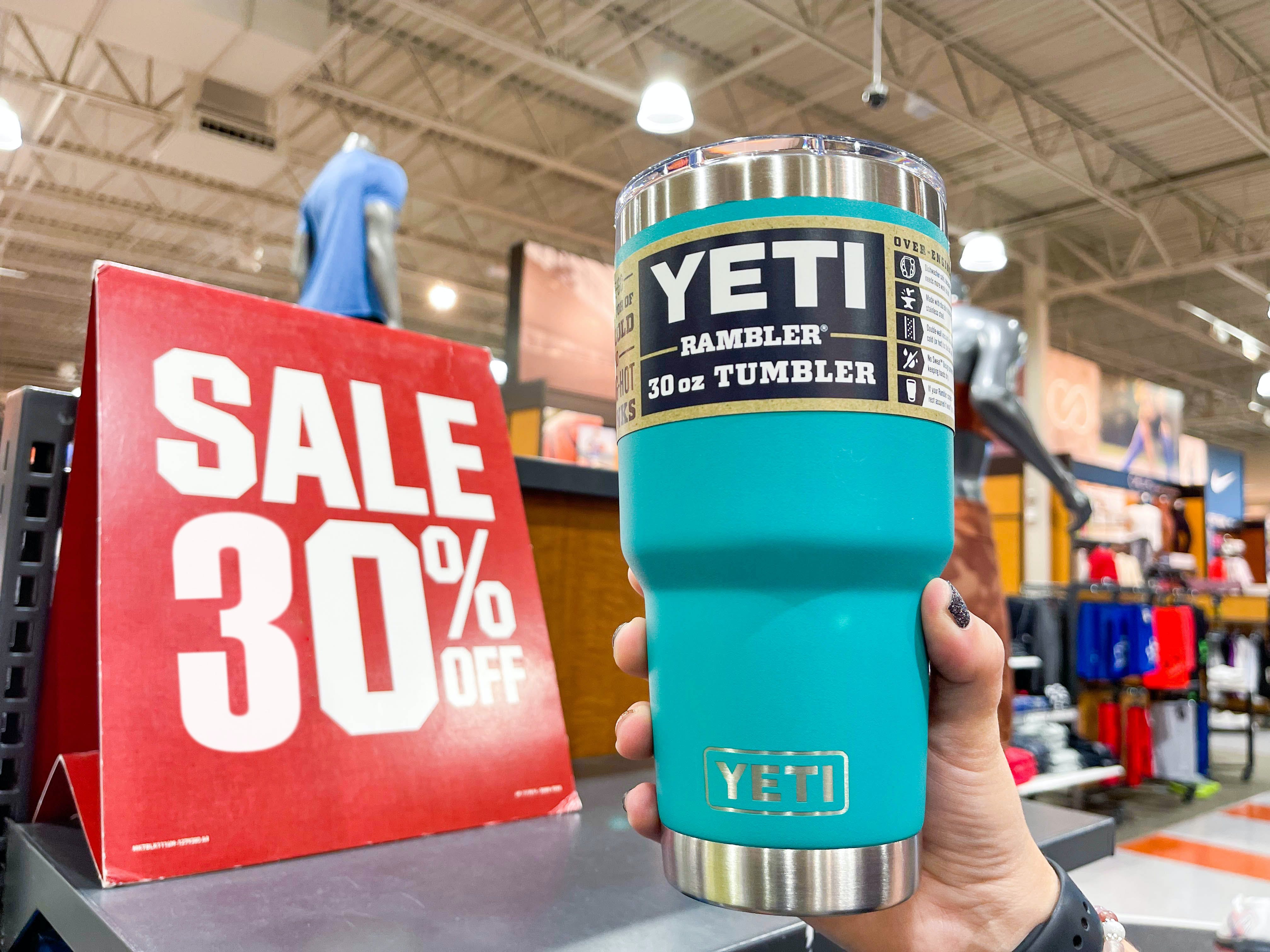 Finding YETI coolers on sale can be just as hard as finding an actual Yeti in the wild.

This is because YETI is picky about who gets to sell their products. They hold to their wholesale pricing tightly, not allowing dealers to offer big discounts. (It’s called minimum advertised pricing or MAP. and brands like Birkenstock do it too.)

But, it’s not impossible to find certain YETI Rambler tumblers, bottles, and mugs for up to 30% off. When you see anything between 20 – 30% off, buy it.

3. Shop YETI coolers at REI in May to save up to 25% during the Anniversary Sale. 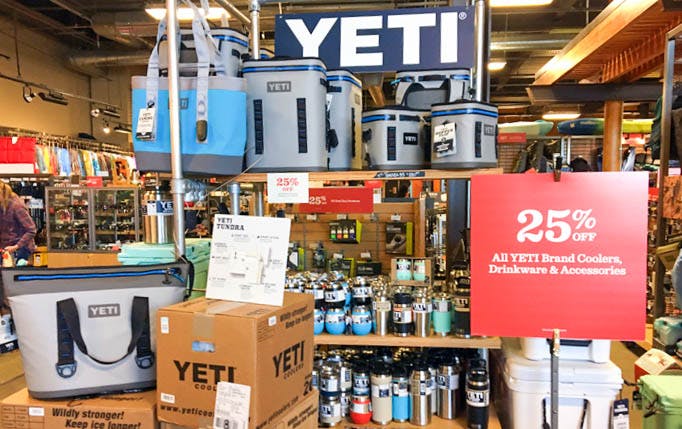 If you want an REI YETI cooler on sale, shop REI’s Anniversary Sale in May when YETI is 25% off, across the board.

REI carries Tundra, Rambler, Hopper, Panga, Roadie, Daytrip, Sidekick, Loadout, and Camino. TIP: Aim to be one of the first people at the REI Garage sale, and see if you can find and score a YETI cooler!

4. Shop YETI coolers for up to 30% savings on Amazon during Prime Day. 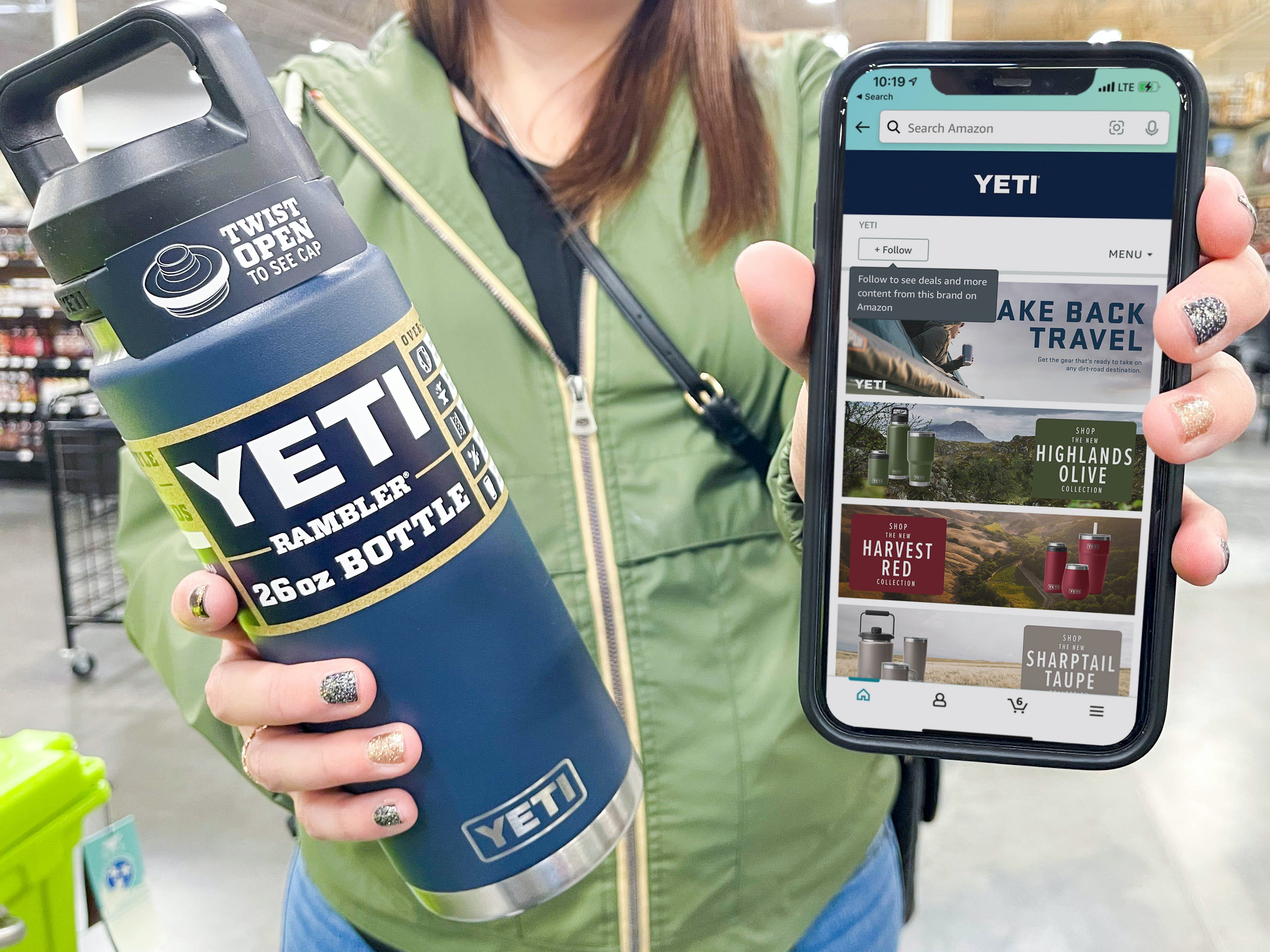 Especially if you’re pining after a Hopper model. Pre-pandemic, I found the YETI Hopper for 30% off on Amazon Prime Day. Now that things have calmed somewhat, we will have to see if the discount comes back for Prime Day 2022, which I expect to be during June or July.

5. Get a YETI cooler with a price match at Dick’s Sporting Goods. 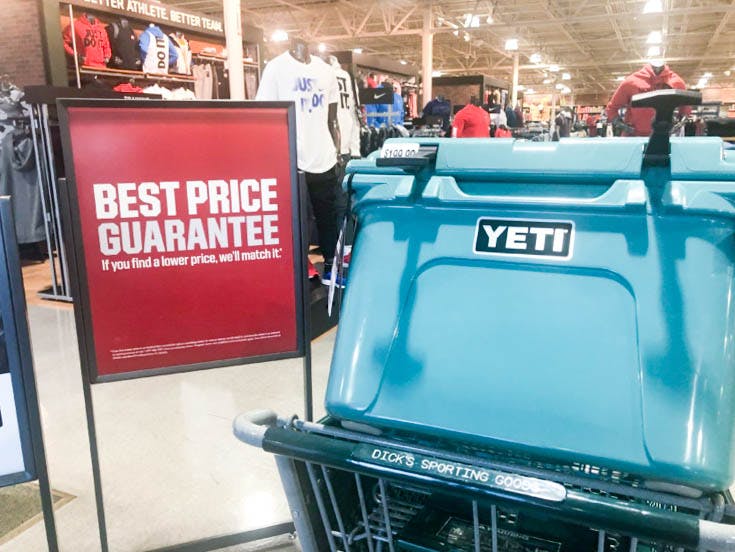 6. Watch for eBay YETI coupons and get an additional 10% off. 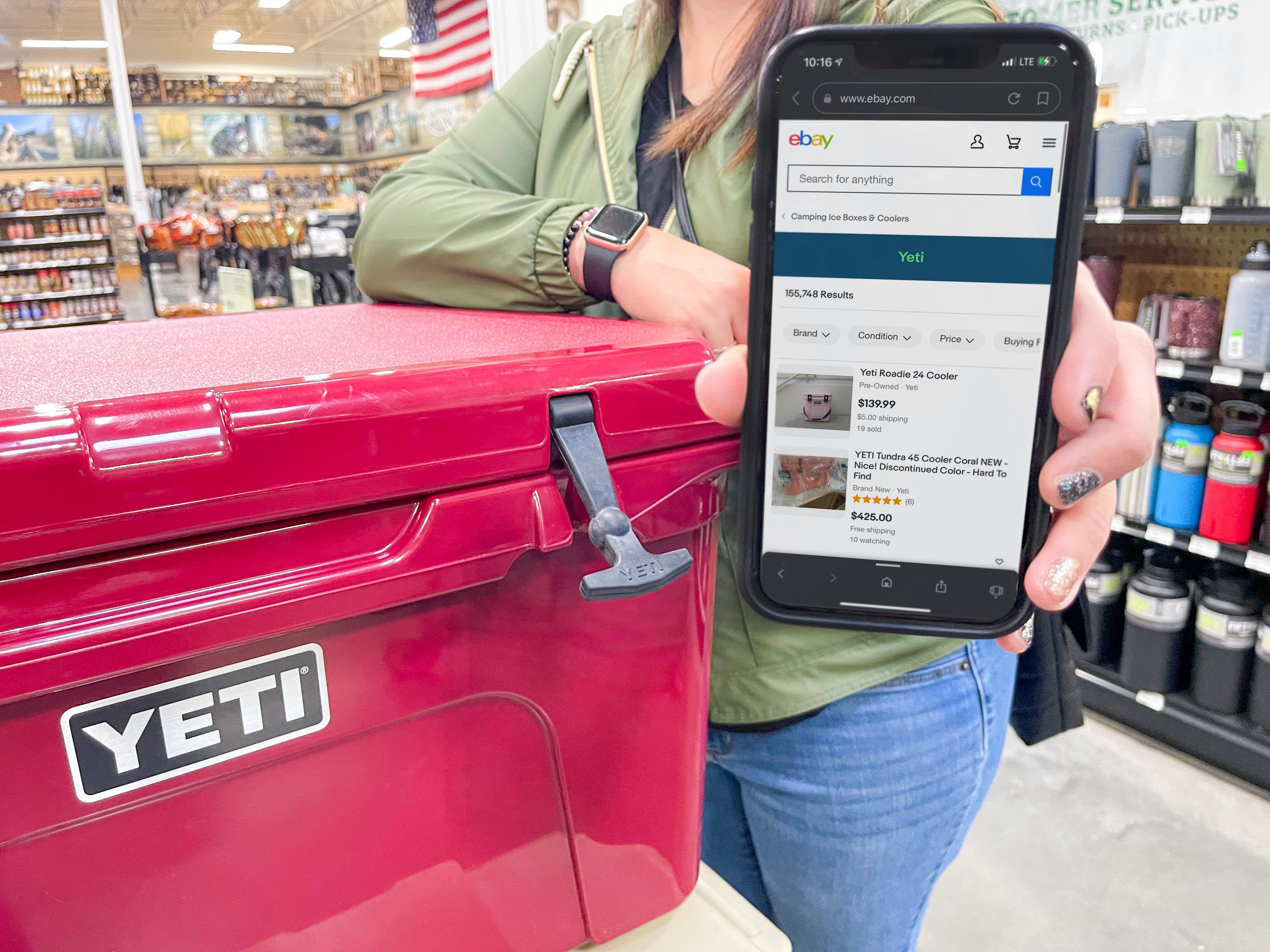 You can save on YETI coolers on eBay when you use a coupon code like SALES365 that gives you 10% off a $30+ purchase.

Before you read on, be sure to bookmark the KCL YETI Deals page to stay informed about all the deals.

7. Convince your grandma to use the D&B Supply senior discount and save 10% on YETI coolers or drinkware.

OK, I get that you might not have a grandma you can tap to run this play for you. But every Tuesday D&B Supply offers a 10% senior discount to anyone 60 years and older.

And D&B Supply rarely offers discounts on YETI (read: basically never), so if you have a parent or a grandparent or kindly neighbor who is at least 60 years young, hand them some cash and send them into D&B Supply on a Tuesday to buy a YETI cooler for you.

Finding YETI clearance deals is tough. YETI makes sure that their authorized dealers hold prices tight. Discontinued items and colors are the exception, and you can find them on clearance shelves at the end of the season (think fall for coolers, spring for tumblers).

Clearance YETI items tend to be easier to find in the store than online. The biggest clearance savings I’ve seen is 26% off on a Hopper Flip 12 Insulated Personal Cooler on sale for $189.99 (reg. price $249.99).

9. Get 20% off YETI coolers with the military and first responders discount through ID.me. 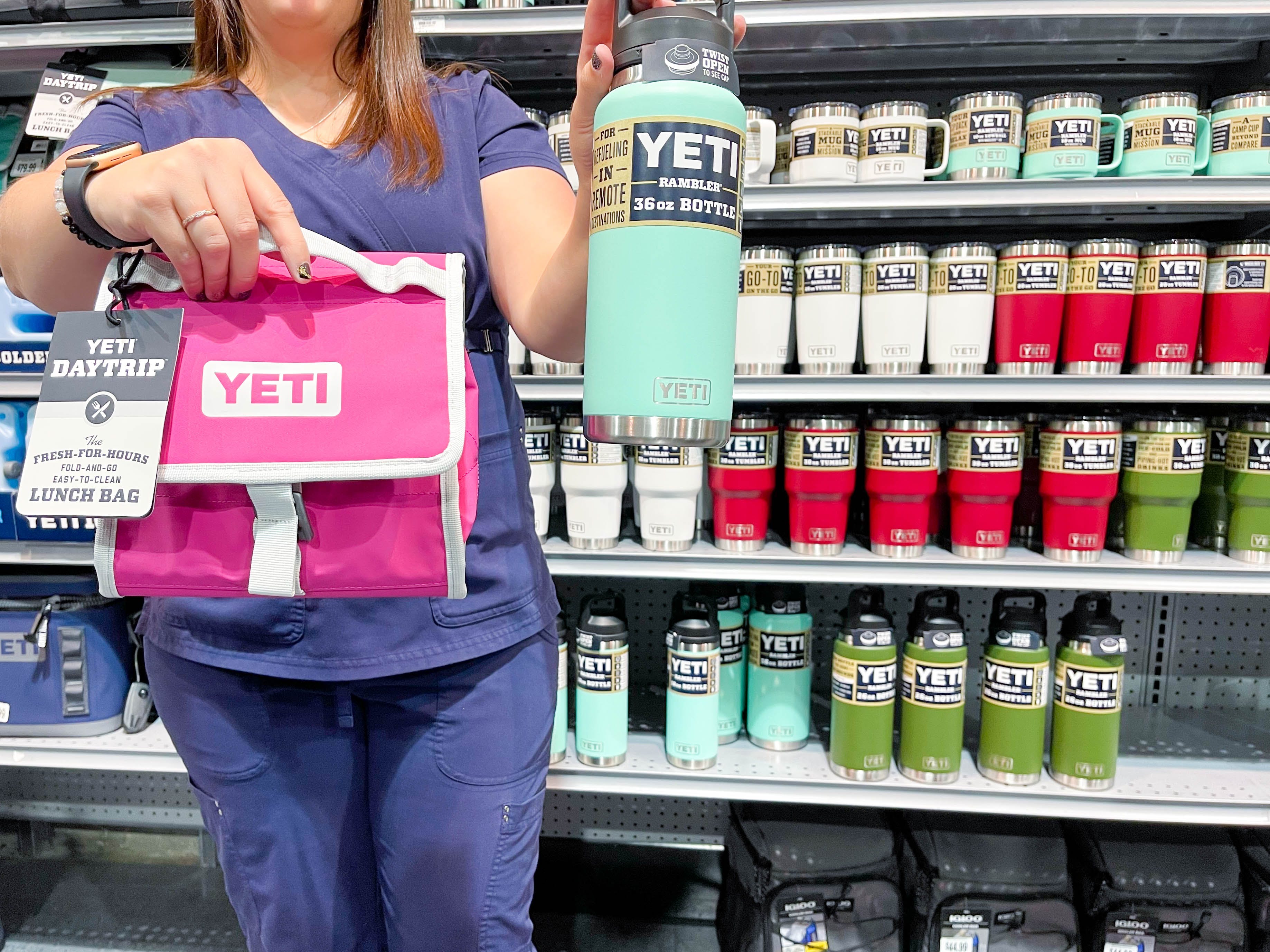 If you’re a military member, first responder, nurse, or government employee, you can get 20% off your YETI cooler when you verify your credentials through ID.me. That’s better then the 10% Lowe’s military discount.

Or get 20% off when you’re shopping in stores. Whether a store accepts the discount is up to the manager, so call your local YETI store first and ask.

10. Save up to 20% on a YETI cooler with Academy Sports “gift card with a YETI purchase” deals. 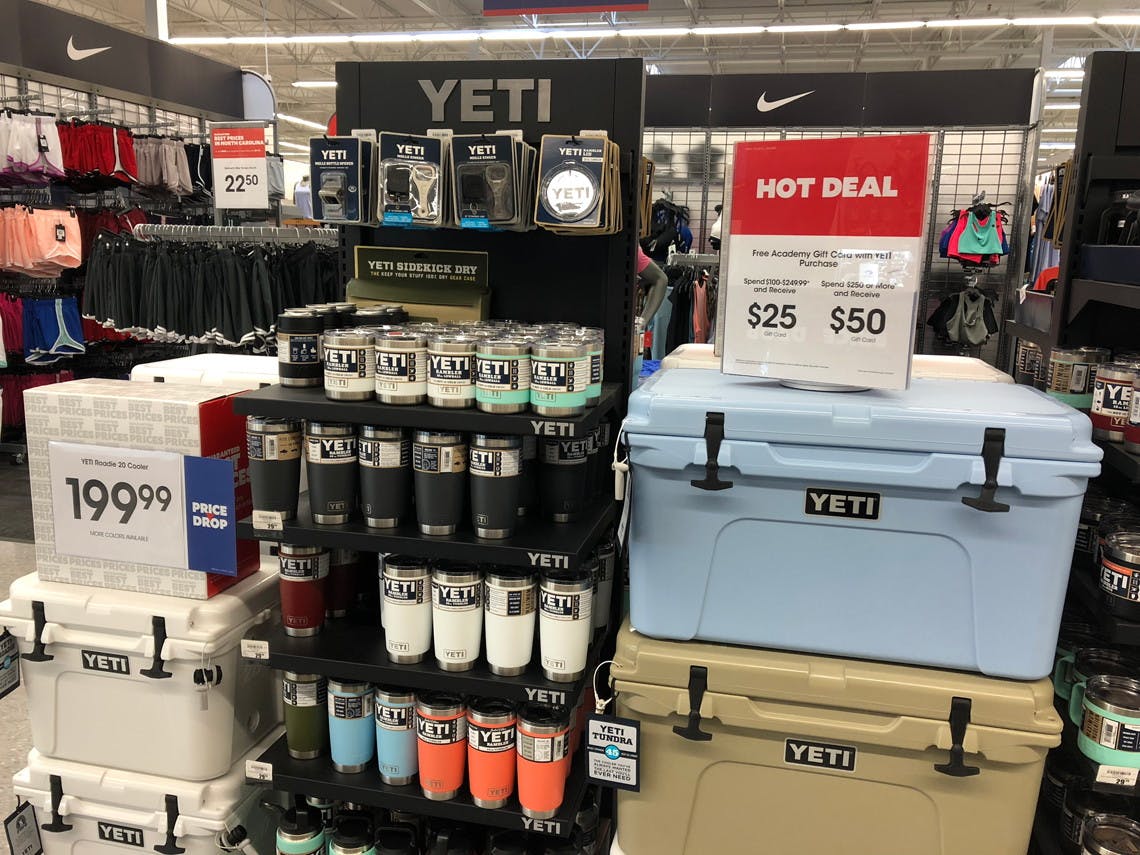 Sure, you might not have an Academy Sports in your area, but you can still shop online.

In the past, Academy Sports has offered a gift card with a purchase deal that’ll save you up to 20% on YETI.

Shipping is free when you spend at least $25 when you create an Academy account; otherwise, the shipping threshold is $35. 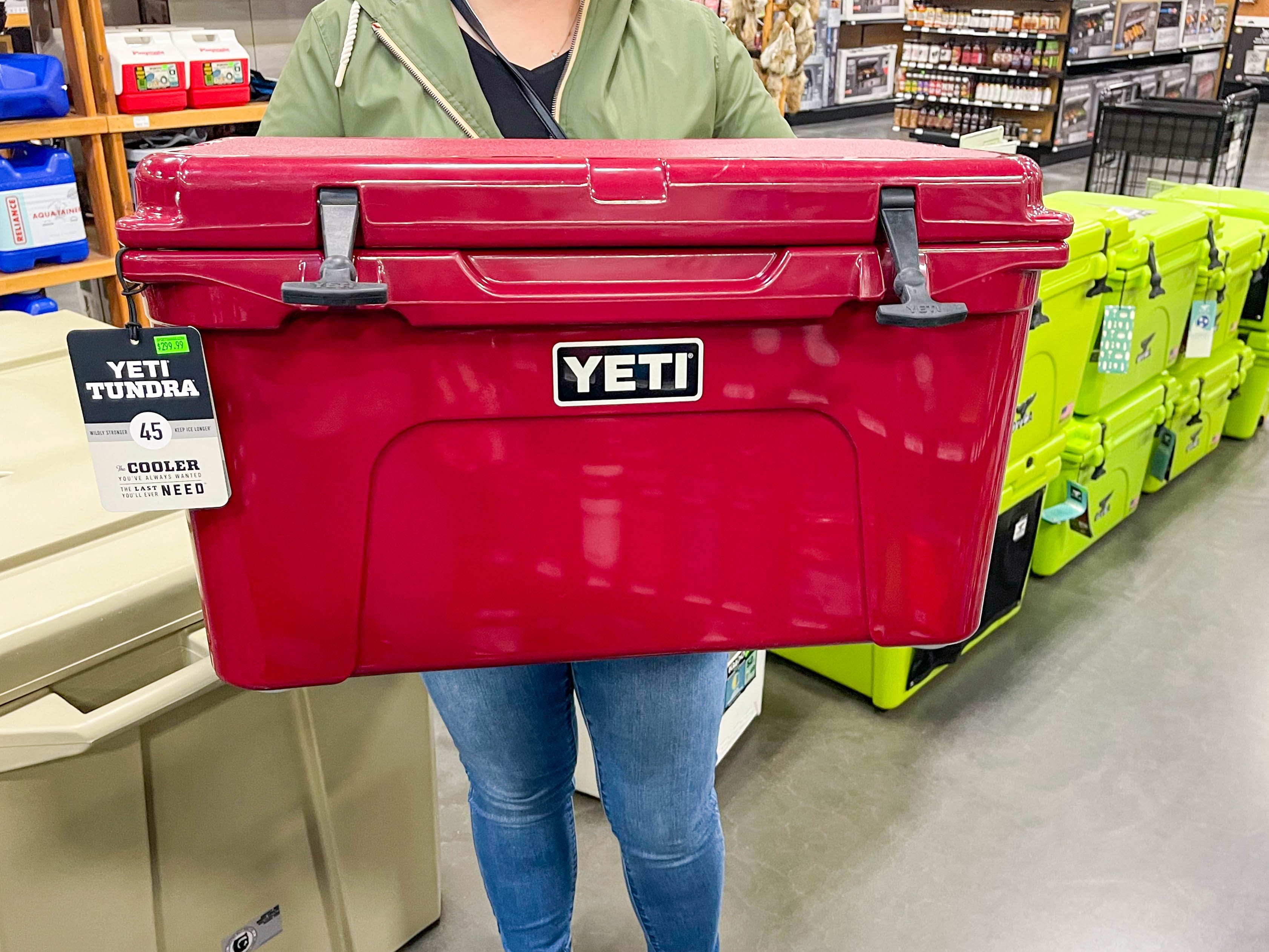 If you want to get the most value, you’d think about buying the biggest YETI cooler. Not so fast.

While you might think the number after each model name is the cooler’s size in quarts, you’d be wrong. According to YETI, they do not. So, how do you calculate how much a YETI cooler really costs? YETI’s website shows how many cans of beer fit into each cooler, which I decided to use in my calculation.

You can see below how the price per can gets lower as the cooler gets larger? Until you get to their mac daddy Tundra 350 hard cooler, the price goes back up, so don’t go any bigger than the YETI Tundra 250 for the best value.

12. Register your YETI cooler at YETI.com and get a free sticker. 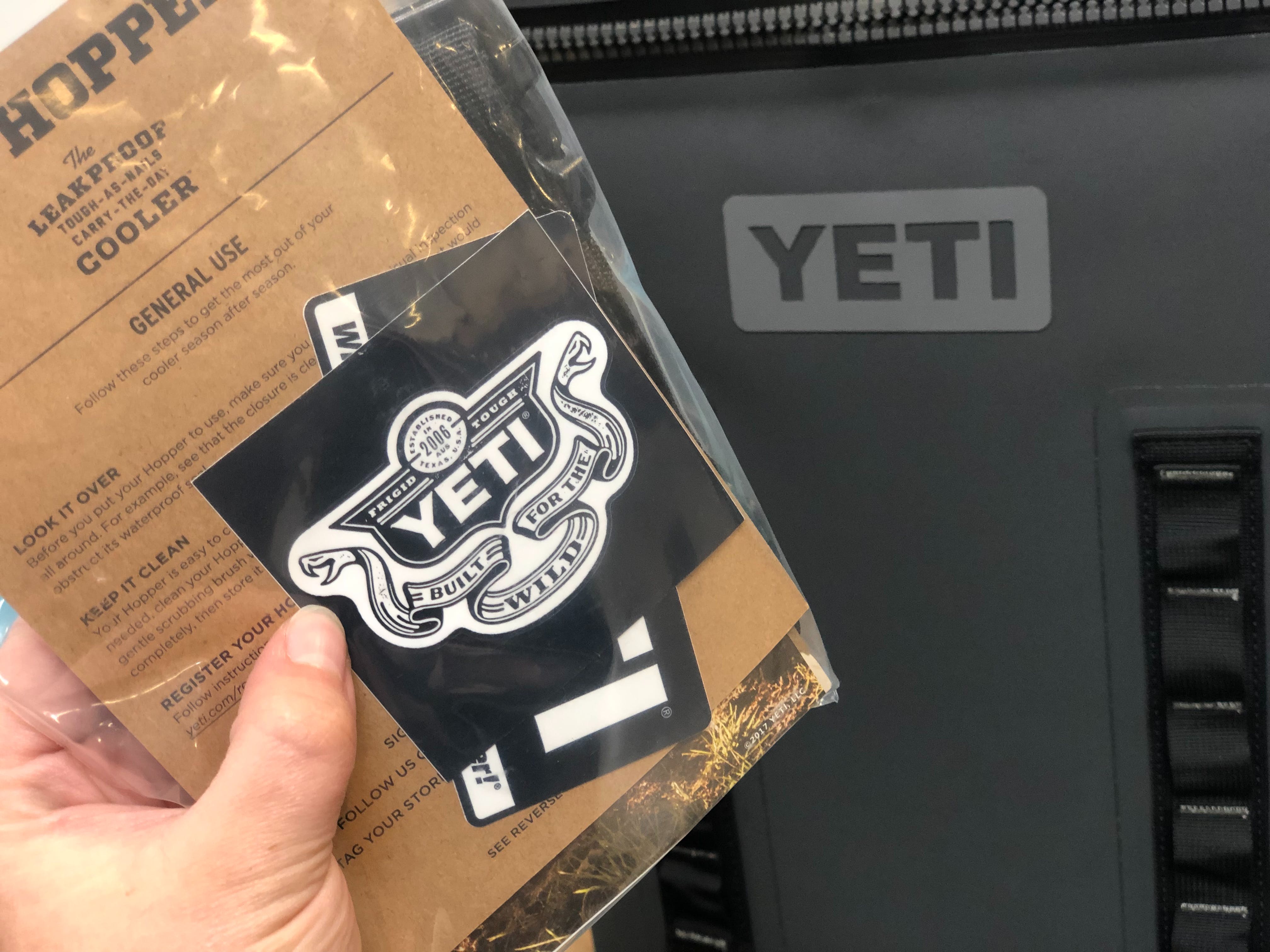 Register your new YETI cooler, drinkware, or other items and get a free sticker. Who doesn’t love a little freebie?

13. YETI offers customization of coolers, but you’ll pay for it. 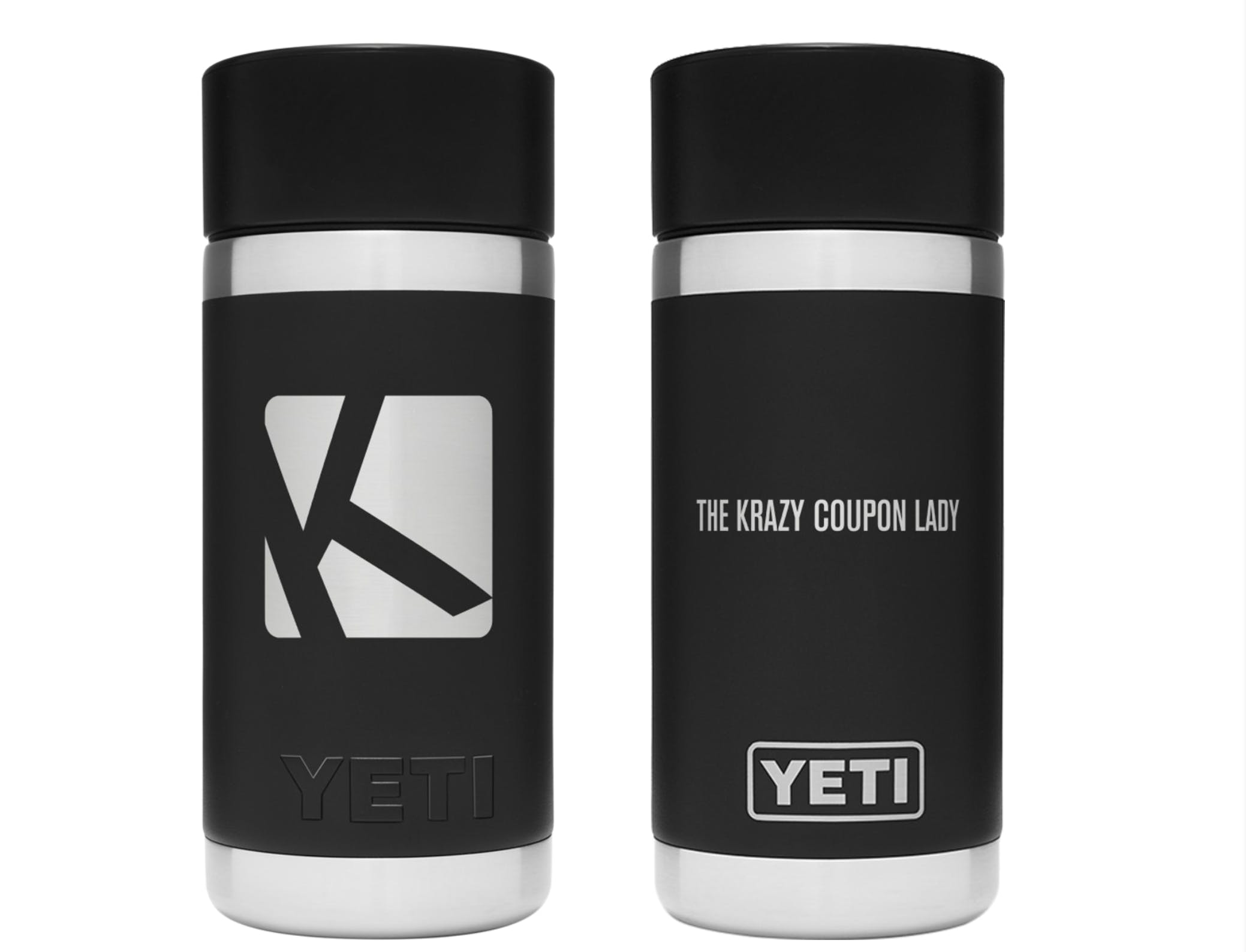 To get your team or company logo printed on your YETI, you have to submit your information, including uploading a picture of your logo, to YETI to receive a quote.

Ever noticed how anytime someone has to quote something, it’s not cheap? Yeah.

Instead, consider buying a YETI Rambler with your team’s logo from Dick’s Sporting Goods.

You’ll pay $10 extra for the tumbler with your logo, but hey, at least you get to represent without breaking the bank. 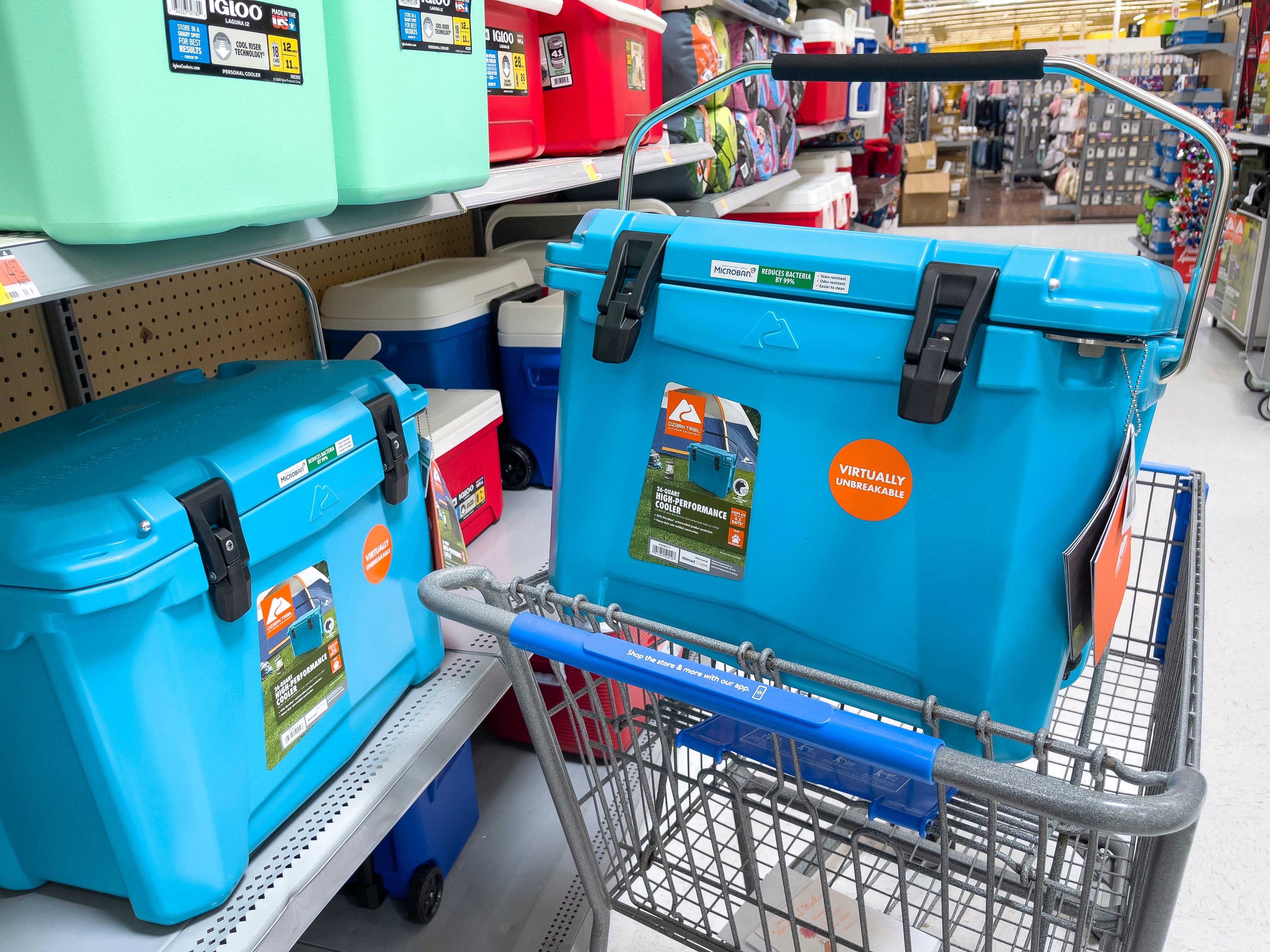 Walmart’s Ozark Trail YETI knockoffs get great reviews, with the biggest complaint being that they’re not YETIs (obvs, right?).

So if you’re going on an extended trip where you won’t have access to ice, Walmart’s YETI knockoff may not cut it, but for families on a budget who can hit the local gas station for more ice if needed, it may be a good option. 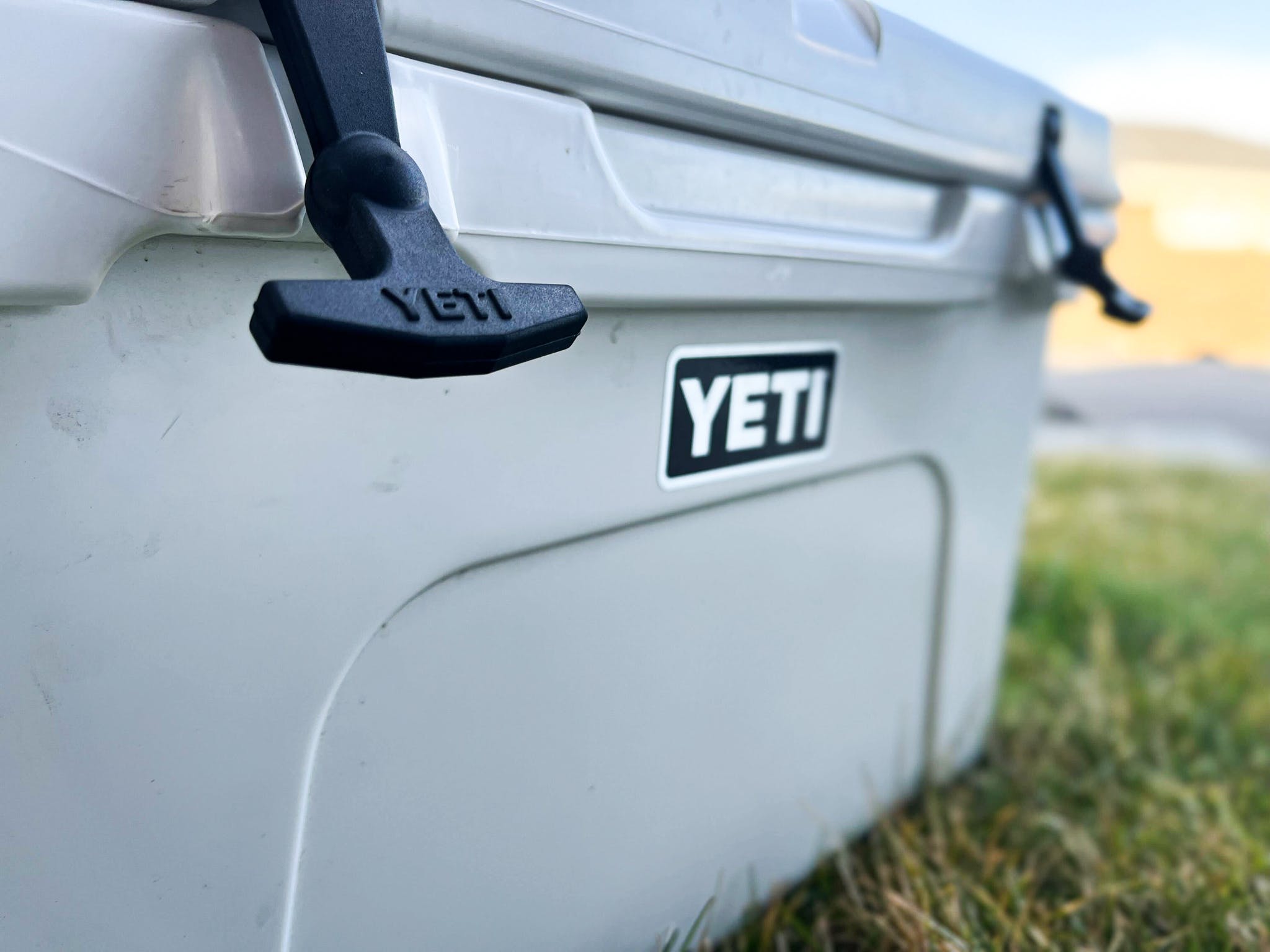 It’s tough spending upwards of $1,500 on a cooler! If your heart is still set on a YETI cooler but you can’t part with that much cash, and you can’t find any YETI sales, look to Facebook Marketplace for a used YETI cooler. Of course, you need to be careful and ensure everything is on the up and up with the seller and cooler before you pay out. If you can live with the condition of the cooler, you can save about the same amount if it was on sale at a retailer. Here are a few deals I recently found on Facebook Marketplace: 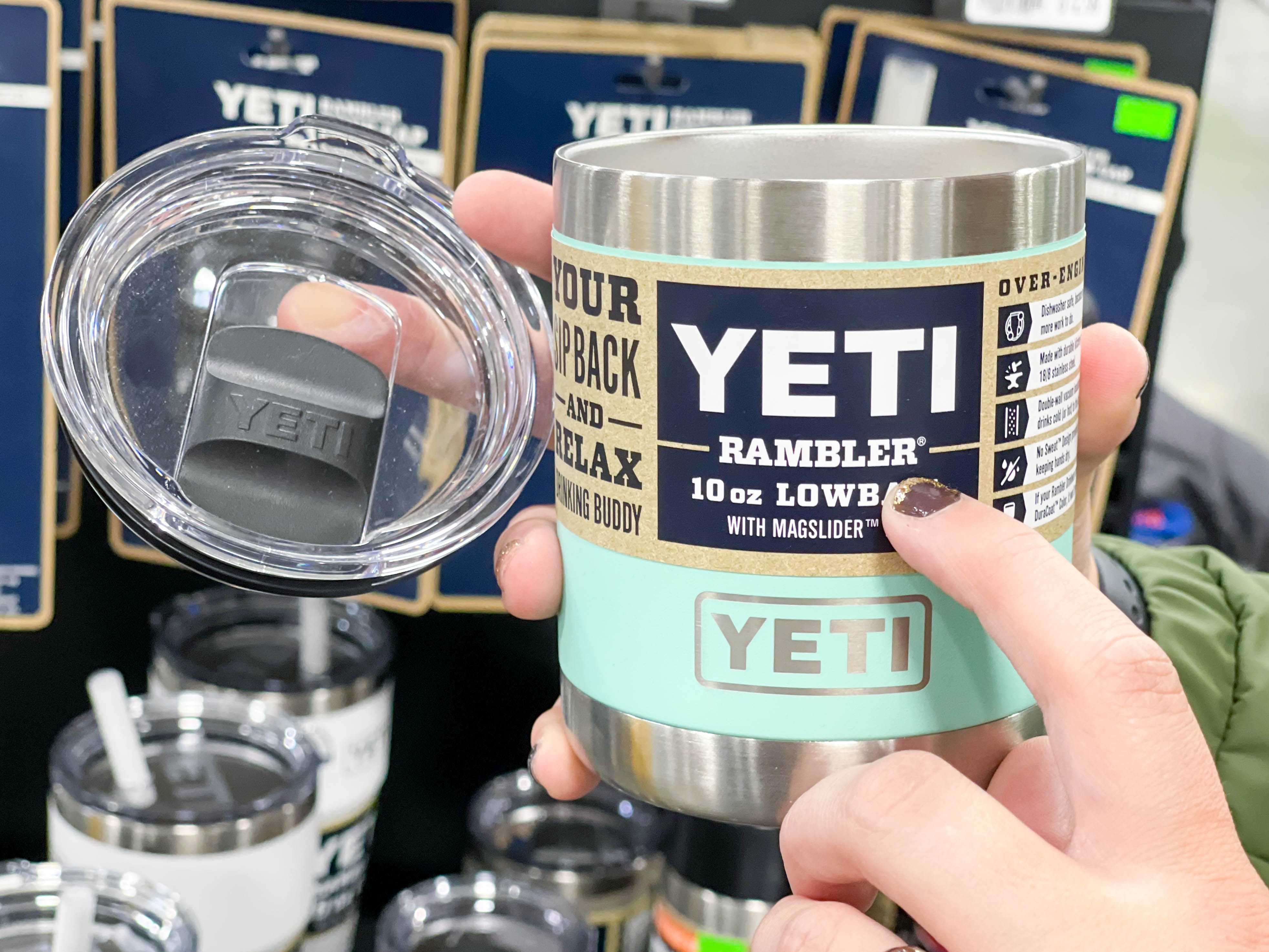 YETI Ramblers might be the most frequently faked items of the YETI collection. Be wary of random internet sites you’ve never heard of that are selling YETI.

Look for these telltale signs of a YETI Rambler fake (the first two tips will help you spot a fake YETI cooler as well).

17. Buy from a YETI authorized dealer to avoid the fakes. The only way to be certain you’re not buying a fake is to buy from a YETI authorized dealer. 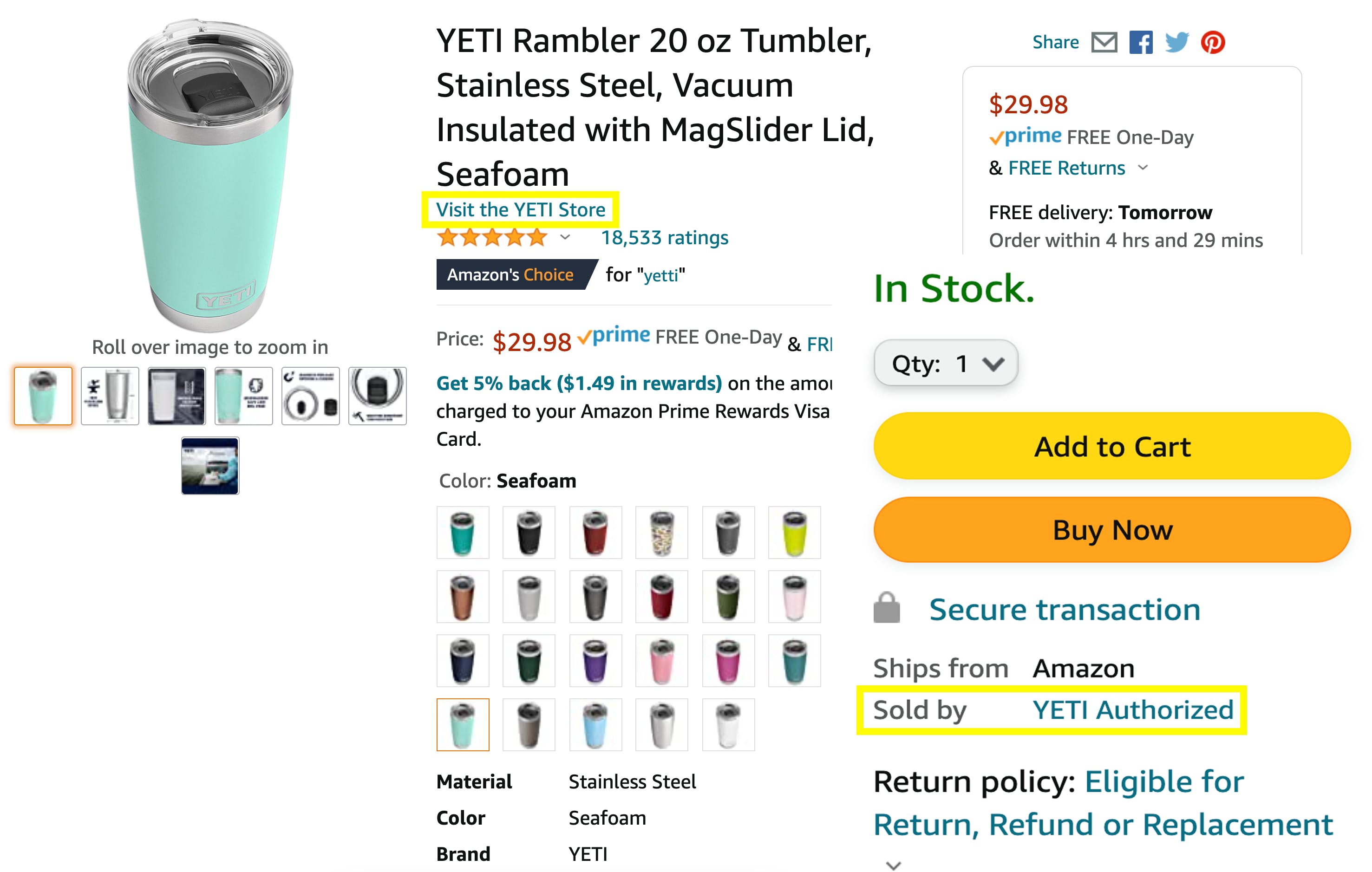 When you’re shopping Amazon, shop the YETI store for the real deal. However, if you see a YETI cooler sold by “YETI Authorized,” you can trust that it’s an authentic YETI.

But, any third-party Amazon sellers without this name are not authorized.

As for eBay, make sure you’re shopping YETI’s authorized storefront and you can rest easy.

Anything sold on either platform that doesn’t fit these criteria might not be an authentic YETI.

19. Do your homework and be wary of inflated YETI prices. 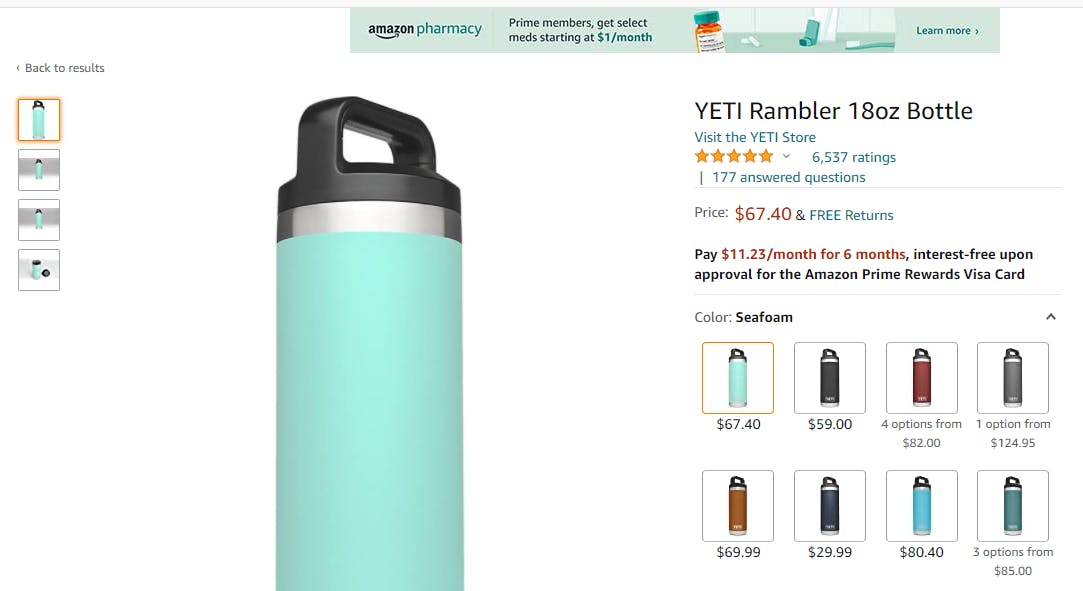 Authentic YETI items are always in demand, increasing the price, but you have to be wary of inflated prices, like the ones I found on Amazon. For the 18-ounce YETI Rambler on Amazon, the price shows $67.40, while other retailers including Yeti.com have it for $30. You could buy two for the price of one on Amazon! Other colors shown like the Clay ($69.99) and the Reef Blue ($80.40) are so high because they’re out of stock at other retailers. Don’t cave to these ridiculous prices. Instead, do your homework and compare prices using this article as your guideline, wait for the item to come back in stock, or go with a different color.

Do you have any secrets on finding YETI sales? If so, please share below in the comments. 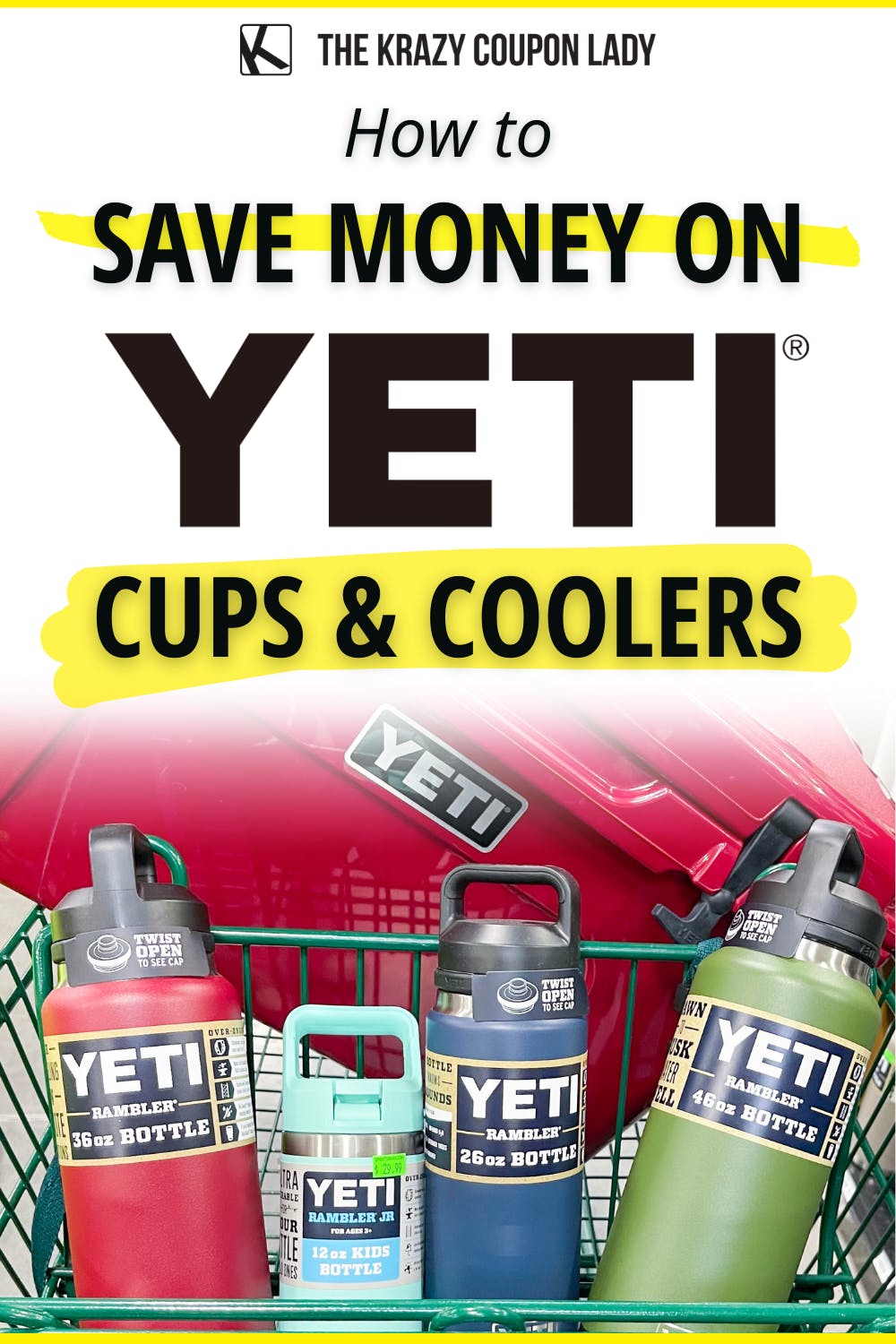 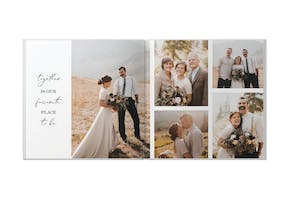 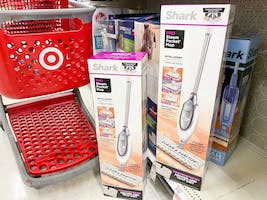 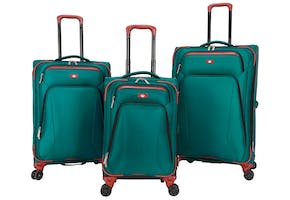 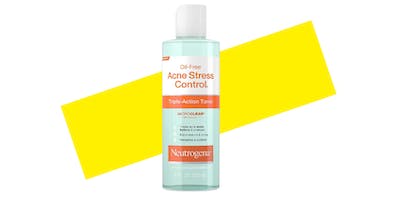 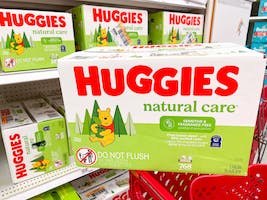 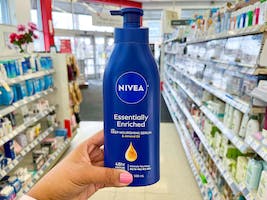 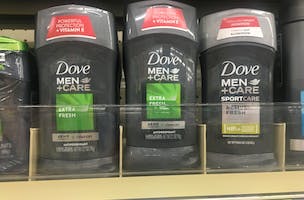 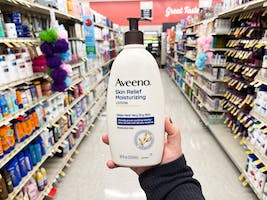